Springtime is here, and so begins barbecue season. A time when the combined scent of flavored meats, poultry, veggies and fish fills the air and wafts into your window from your neighbor’s cookout. Oh, what a magical time. It’s as wonderful as the smell that emanates from a real wood-burning fireplace.

The thing about barbecue season is that you have to enter it armed with the right tools. It would help if you had the best grill that matches your lifestyle. If you are an apartment dweller, you’ll need an indoor grill. If you have the backyard of your dreams, then you can go in big. Quite frankly, if you are serious about this process, even your apron matters, and of course, the barbecue sauce you use sets the flavor.

You can make your own, and we wouldn’t blame you if you did. Or you can buy one from the store — we are not judging you; we are encouraging it — and either use it as is or zhuzh it up. But before you decide to buy, we’ve created a cheat sheet on the different kinds of barbecue sauces you may encounter.

Here are some of the best store-bought barbecue sauces that will make your taste buds tingle.

Texas, Kansas City, Memphis and St. Louis barbecue sauces are usually tomato-based; they are thick, sweet, and tangy. They feature molasses, brown sugar, a variety of spices, and even cayenne. If you plan on whipping up a batch at home, you can use ketchup instead of tomato purée or crushed tomatoes.

While Stubb’s has flavorful sauces, the top choice has to be its sweet and sticky version. And while some sauces that are labeled sweet can come off syrupy, that isn’t what you get here. The apple cider vinegar tempers the brown sugar and molasses. But what makes this barbecue sauce an excellent all-around choice is that if you make BBQ chicken in the oven, its hickory smoke flavoring won’t give it away that you didn’t do it on a grill. 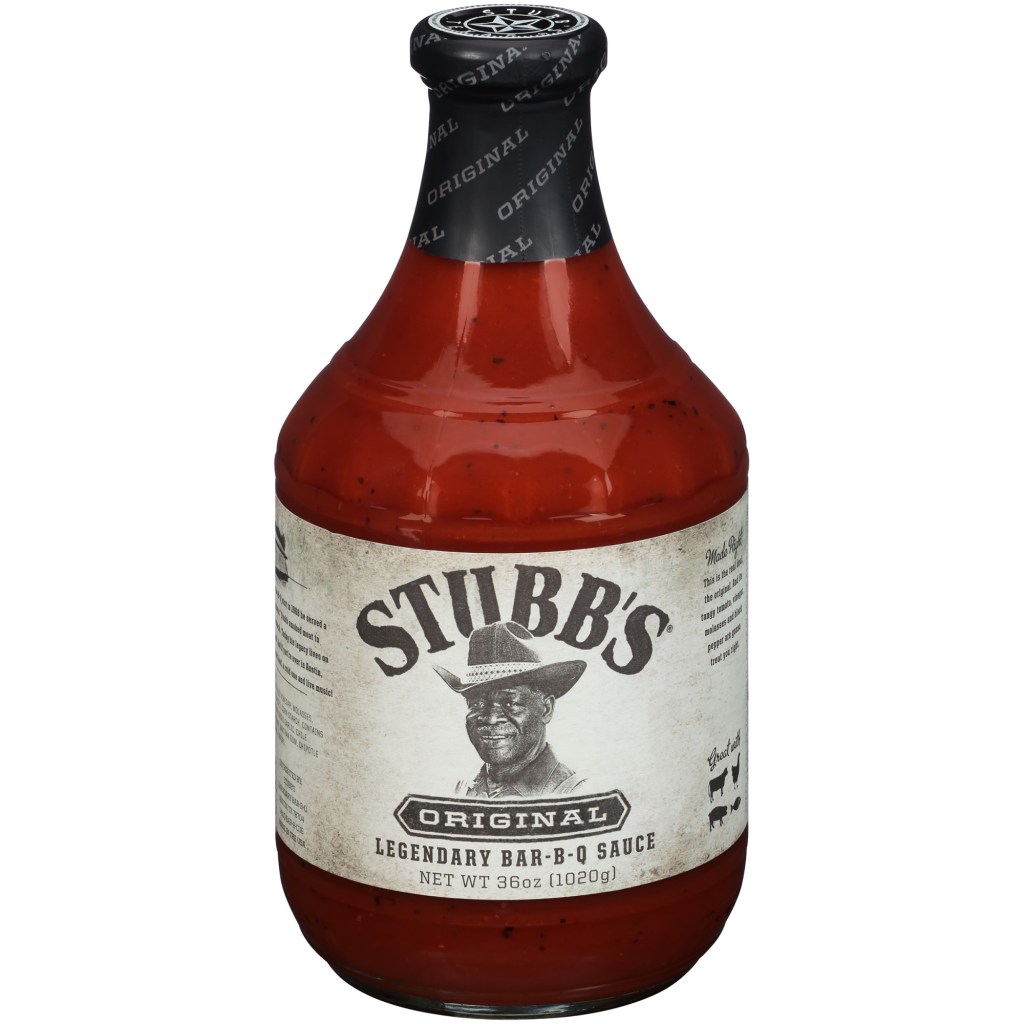 Dinosaur Bar-B-Que opened its doors in Syracuse, NY, in 1988 and now has seven locations throughout New York and one in New Jersey. And if you ever have a chance to eat at the restaurant you should. But in the meantime, you can slather their barbecue sauce on your favorite meats at home. All of the sauces the brand produces are delicious, but the Wango Tango Habanero Hot Bar-B-Que Sauce really stands out. It is specifically created for those who like things spicy. It is perfect for wings. 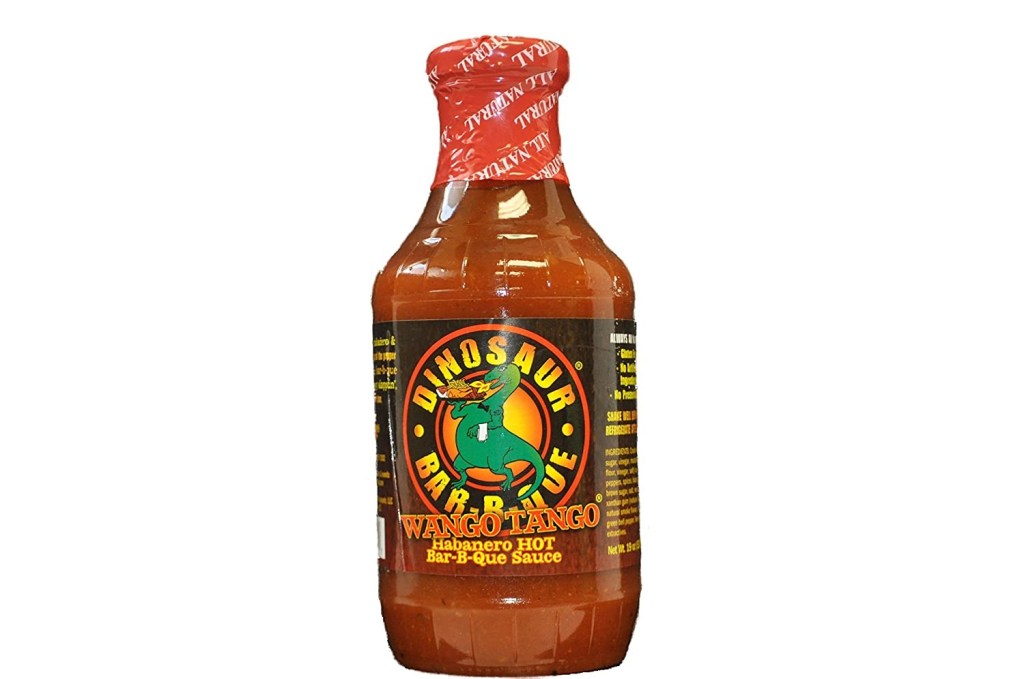 If you want multi-layered flavor, then you want American Stockyard Texas Hill Country BBQ Sauce. It follows the typical blueprint for Texas-style BBQ sauce, but its hot pepper combination has more than just cayenne; you also get the smoky flavors of ancho, chipotle and guajillo. Balancing their heat is apple cider vinegar, orange juice, garlic and tamarind. Use it generously, especially on your Texas-style brisket. 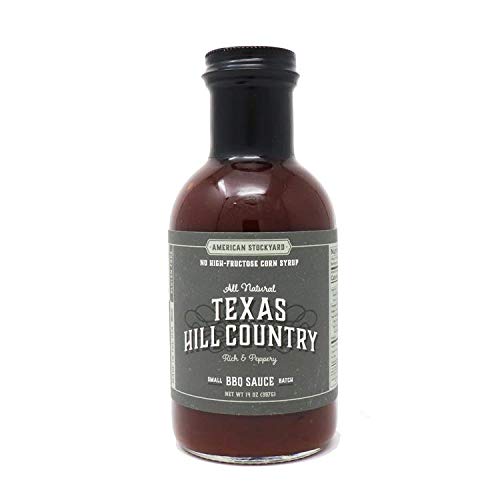 For those who like a thinner barbecue sauce, North Carolina style is the way to go as they are vinegar-based instead of tomato sauce. But not all Carolina style is entirely devoid of tomato, just the Eastern style, while the Western-style has but it is has less than a Memphis or Texas-style. In addition to being vinegary, they are also spicy.

The perfect induction into Carolina-style barbecue is to try a vinegar-based sauce like Sticky Fingers Carolina Classic Barbecue Sauce. Its mustard flavoring plays well off the vinegar and aged cayenne pepper. Try it on pulled pork. 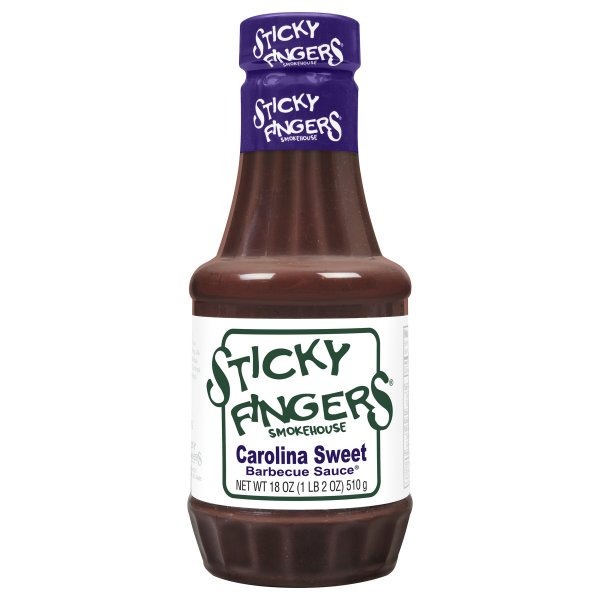 If you like a little spice and a vinegar forward sauce, you are who Primal Kitchen Carolina Gold BBQ Sauce was created for. It is unsweetened, which gives you an excellent opportunity to customize it. It pairs well with shredded chicken. 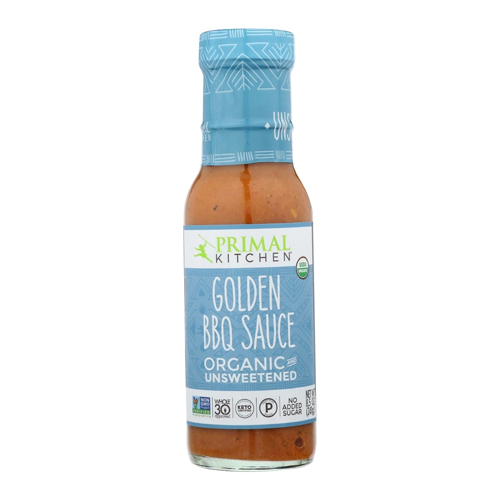 South Carolina is the place to find a thinner form of barbecue sauce that has mustard as the prominent flavor.

The Palmetto Sauce Company’s Congaree Gold is the real deal. The first ingredient is mustard, and the rest of the flavors, like honey, cayenne, turmeric molasses, adds heat and tang, which rounds out the taste. Enjoy it with pork. 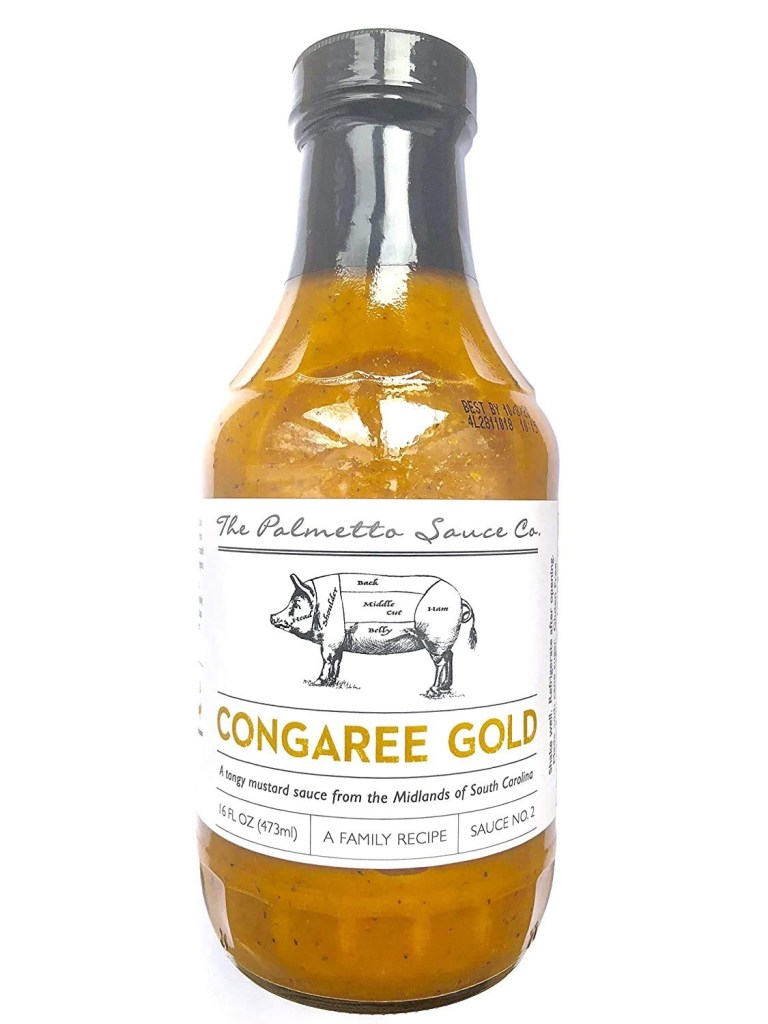 This white and thick style of mayonnaise-based barbecue sauce has its roots in Alabama. Sure, it doesn’t look like your typical BBQ sauce, but if you’re looking for a support cast for your summer grilling game, this makes one hell of an addition.

The brand that speaks to mayonnaise-based BBQ sauce’s origins is Lillie’s Ivory Barbeque Sauce. Its appearance may throw you off because you are used to seeing red. It has some of the same standard ingredients that mayonnaise typically does but in addition to those there is honey which helps take any plain sandwich to another level. 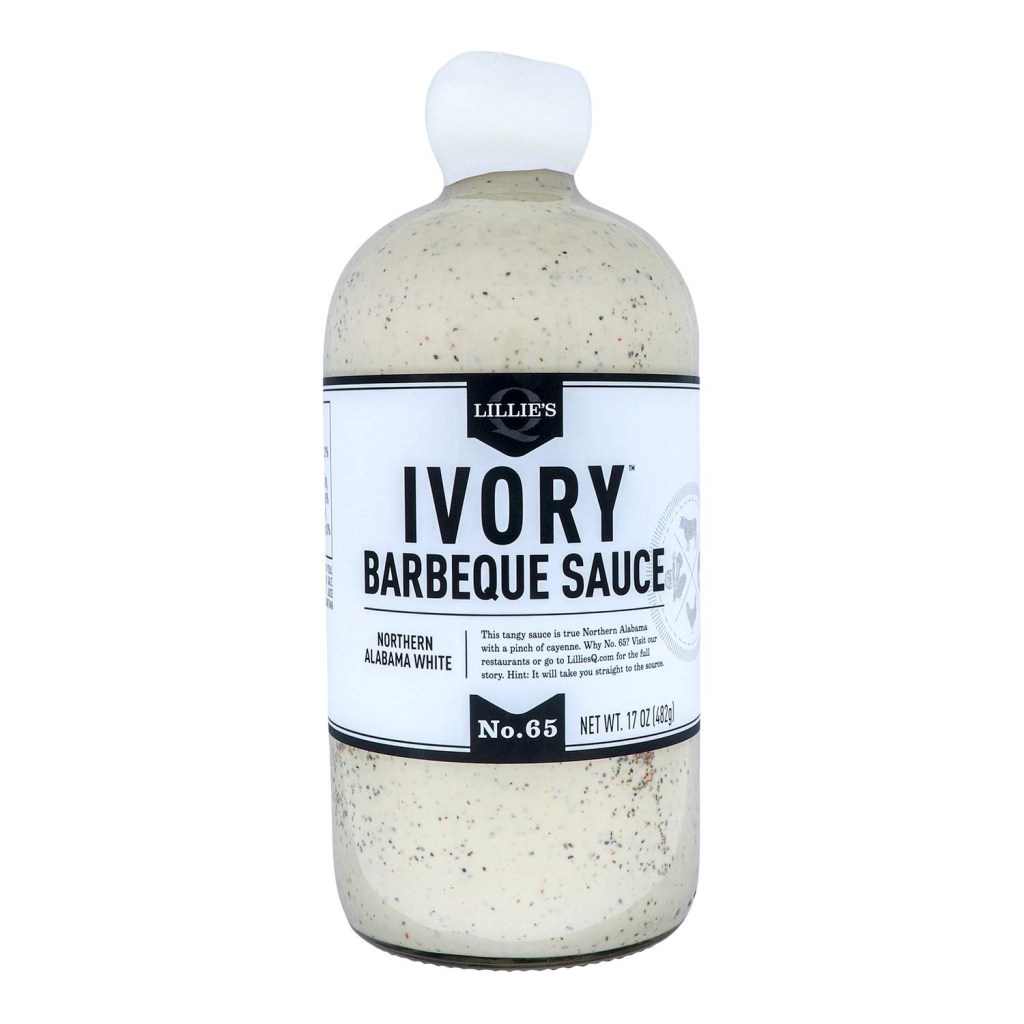 Hawaiian-style BBQ sauces are meant to invoke tropical flavors such as pineapple, mangoes and coconut.

Primal Kitchen’s version is a good way to get some of those flavors without a syrupy backdrop. The brand’s organic Hawaiian style BBQ sauce is unsweetened so you can add honey, molasses, or sugar as you see fit, or leave it as is. No matter you choose to do it works well slathered on short tip ribs. 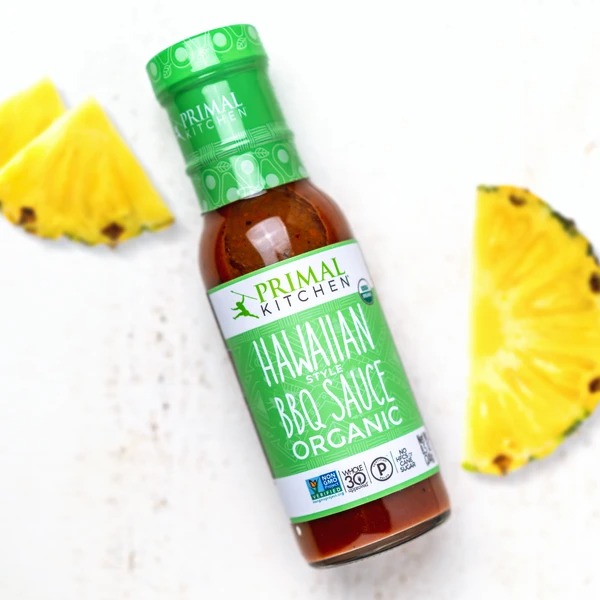 You may have noticed there are bottles in the condiment aisle labeled Korean BBQ, but that could be a little confusing. Korean barbecue isn’t a sauce per se but rather a way of cooking. It involves grilling meat or chicken on a gas or charcoal grill on the same table where you will eat. The meat may or may not be marinated, and there are two popular forms: Bulgogi and Galbi. Bulgogi is typically made when the tenderest bits of beef are marinated, but you can also use chicken or pork. Additionally, Galbi which means “rib,” so you would usually use short ribs.

Made with ingredients like soy sauce, garlic, apple juice and ginger, We Rub You Marinade should impart flavors similar to that of what is used to prep meat at a Korean-style BBQ before throwing it on the grill. It can tenderize your meat and works well on an indoor grill. This option on Amazon is a good starter for diving into the wonderful and tangy world of KBBQ. 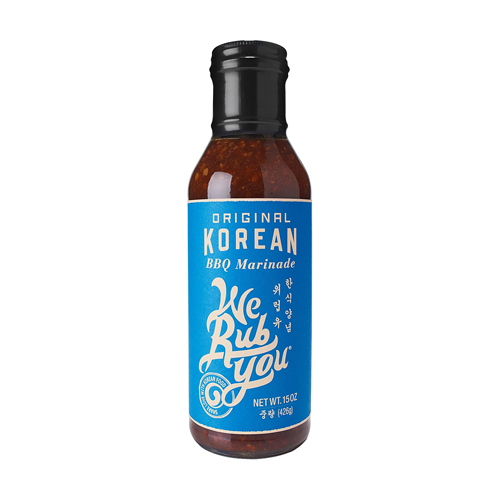 Another way of cooking your meat on a grill is commonly found in Jamaica. You will see Jerk Chicken or Jerk Pork on menus. The style of cooking is typically made by combining ingredients that include scotch bonnet peppers, allspice, pimento and cinnamon. The meat used is customarily marinated in that sauce and then cooked in a metal drum with a grill inlay.

While a jarred marinade won’t capture the complete essence of what you will get in the Caribbean, Walker’s Woods Jerk Seasoning is one of the best options. It comes in mild and spicy, and when we say spicy, we mean spicy. We suggest wearing gloves when you massage it into your meat. It is a semi-dry rub made with scotch bonnet peppers, one of the hottest peppers available. The brand also does a sauce that doesn’t impart as intense a jerk flavor as the rub. 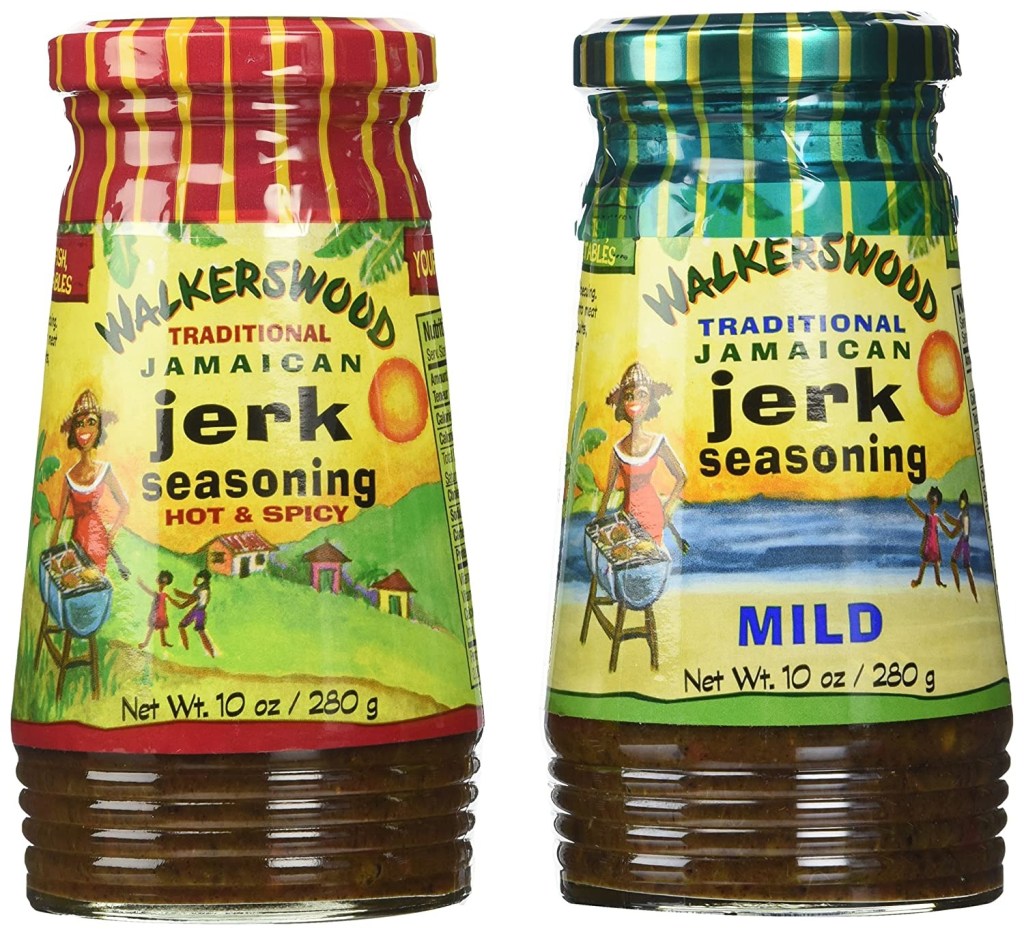 Similar to barbecue sauces are grilling sauces. The major difference here is that barbecue cooking should be low and slow. Alternately, when grilling something, it is done on high heat, so sauces specific to that method should contain little to no molasses since it can burn and leave a bitter-ish flavor over high heat.

Harry & David’s Peach Hatch Chili Grilling Sauce made with peaches, garlic, hatch chilies and chipotle has a subtle smokey flavor that works well with burgers (even veggie style), chicken and beef. It can be used as a marinade, dipping sauce, or brushed on the meat, preferably right before your meat is done cooking. 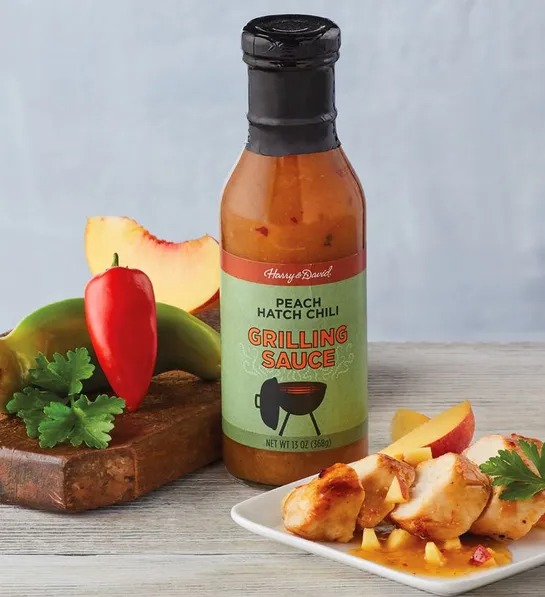