Drinking and games are fun on their own, but putting them together (in a responsible fashion!) is a great way to elevate your night or day. But as much as we love a good game of Beer Pong, at some point or another, you’re going to need a few more games in your rotation to spice things up a bit. After all, variety is the spice of life.

With that in mind, we’ve rounded up 15 of the best drinking games for you to break out during your next party. We’ve given you the rules and regulations of each game, so all you’ll need to do is stock up on the supplies needed to get your game on — but we’ve also included places where you can do that too. So get your game face on and get ready to have a blast.

The thing about classics is that they’re classic for a reason. Beer Pong is among one of the simplest drinking games to understand, but one of the most difficult to master. The setup, if you’re not familiar, is simple: Each side sets up six cups in a pyramid-style shape before teams of two take turn tossing ping pong balls into each of the cups. The first team to clear the opposing team’s cups wins the game. Your individual friend group may have their own rules and regulations, but the most common is to have beer in each of the cups that you have to drink when a ball lands in each respective cup. Ensure you’re more than set on ping pong balls to use with this 50-pack set from MAPOL. 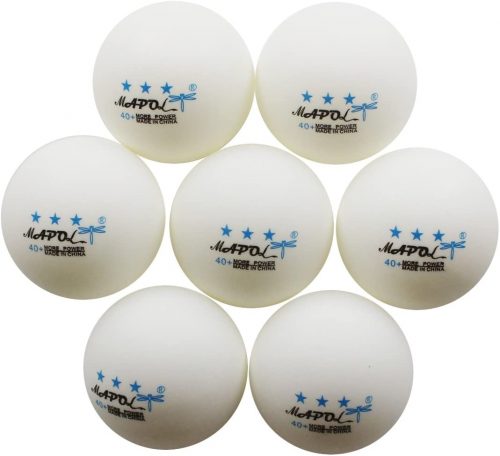 On its own, Jenga is a fun and exciting game, but incorporating an element of drinking certainly takes the experience up a notch or two. By writing different instructions on each of the blocks (like “give two sips” or “take two sips”) each block pulled from the tower can offer up a prompt to further the drinking experience. And, if someone causes the tower to fall, they’ll have to finish off their drink completely. Let your imagination run wild as you provide the literal building blocks for one delightfully entertaining drinking game. 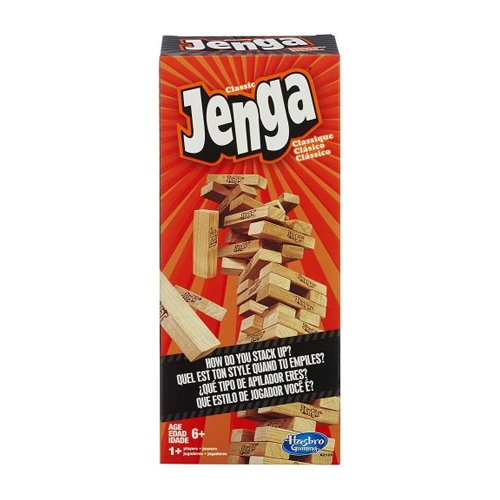 Those looking to get the evening off to a roaring start should consider Power Hour. From where we’re sitting, this is easily one of the best drinking games out there. The premise is simple: put together a playlist of 60 songs and have each song shuffle after it plays for a minute. Whenever the next song comes on, take a drink. Easy to play and still socialize, put your favorite music snob in charge of the playlist and see what kind of fun options come into play. Plus, you can bolster the experience by jamming the playlist over a Bluetooth speaker like this colorfully compact option from Sony. 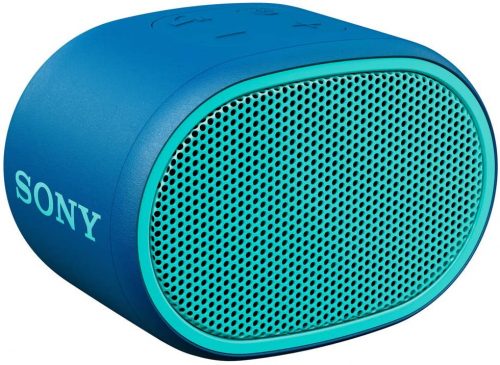 Perhaps more than any other drinking game on this list, Flip Cup is the one that can cause the most chaos and the most mess — but it’s often the most fun. Participants split up into two teams and line either side of a table with a cup of beer or liquor. When the game starts, players on either side have to finish their drink, put the lip of the cup on the table edge and then flip it over (using only your fingertips) back into the right-side-up position before the next person can start. Frenetic and fun, it’s a great drinking game for larger groups. If you’re worried about getting an existing surface messy, spring for a folding table like this one from Flash Furniture so you can have a dedicated space for competition. 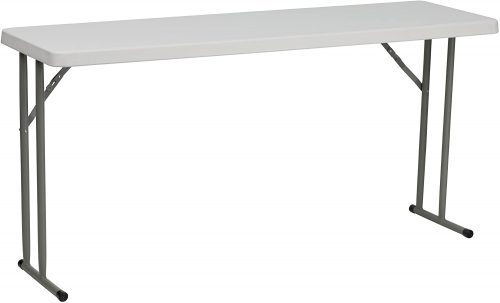 Whether you call it Ring of Fire, Circle of Death, or King’s Cup, the rules to this excellent drinking game are the same. Players sit around a table with a beer in the center and a deck of cards spiraled out around it. Each person takes a turn drawing a card and the number on the card corresponds to a different action (for example a card with the number eight on it means ‘mate,’ so you pick a person to drink with). Once the card has been pulled, it needs to be inserted into the tab on the beer. The person that causes the tab to pop or the person that draws the last King card (hence King’s Cup) has to then finish the drink. Having a deck of waterproof cards like this striking gold set from EAY is handy should things start to get a little rowdy. 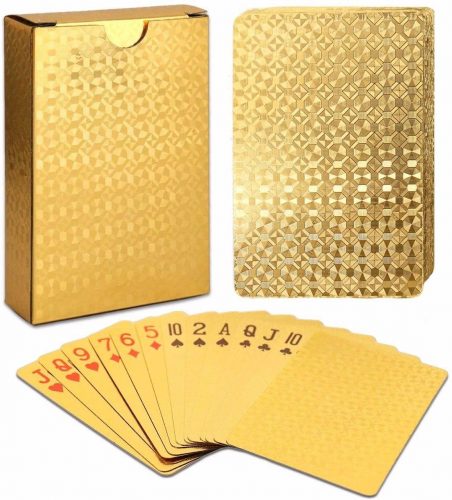 If you like the idea of King’s Cup and want to save yourself a Google or two, Loaded Kings has all the rules for King’s Cup easily printed on the cards themselves. This will just allow you to focus on the game instead of having to keep track of all the different rules throughout the course of a game and will let you just have fun instead. Oh, and the cards are 100% waterproof, so no worries if you or a friend happen to commit a party foul or two over the course of a match. 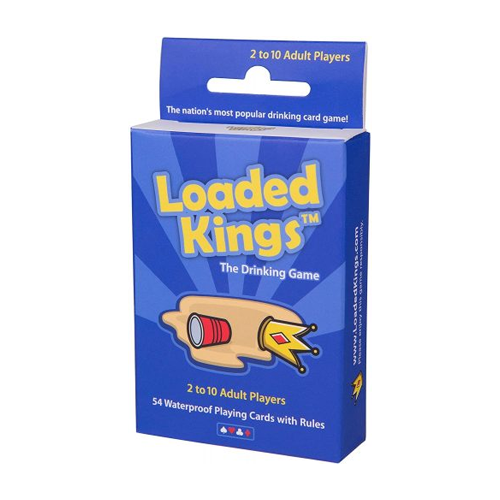 One of the most hilarious card games made, Cards Against Humanity offers players a series of prompts (black cards) that must be responded to by playing an answer (white cards). The person that drew the prompt card will then choose which of the white cards is the funniest. Described as “a party game for horrible people,” the cards are inherently absurd and decidedly adult. Add in a drinking competent by having the losers of each round have to take a sip or just play it while you’re casually enjoying your favorite beverage. 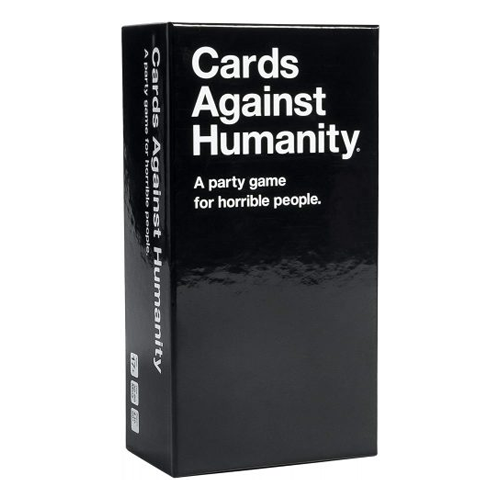 Sort of similar to Beer Pong, Quarters is a drinking game that involves players trying to bounce a quarter off the table into a shot glass. If you miss your shot, it then rotates to the next player. However, if you make it, you can tell someone to drink. The game continues on like so, but feel free to set a point total to reach to be declared the winner. This set of ceramic animal head shot glasses from Foster & Rye gives a sturdy foundation to play on and also provides a bit of character to the competition. 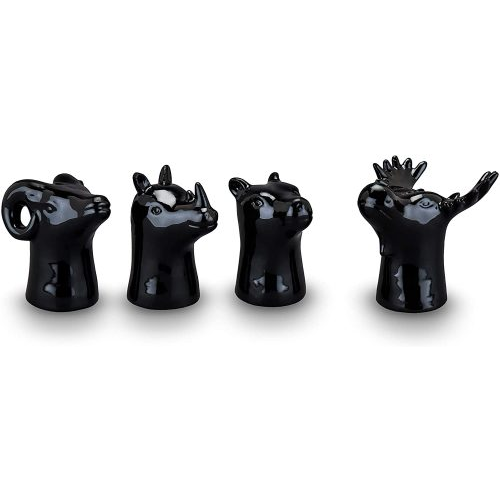 Another card game, Buzzed, comes to us from the minds that brought us What Do you Meme? creating a fast and fun way to get the party rolling. Players will take turns drawing cards from the top of the deck and reading the prompt out loud. Depending on the card, either you or the whole group will take a drink. Meant to be played with groups as large as 20 or as small as three, the hilarious cards might cause you and your friends to blush once or twice, but will definitely be nothing short of entertaining. 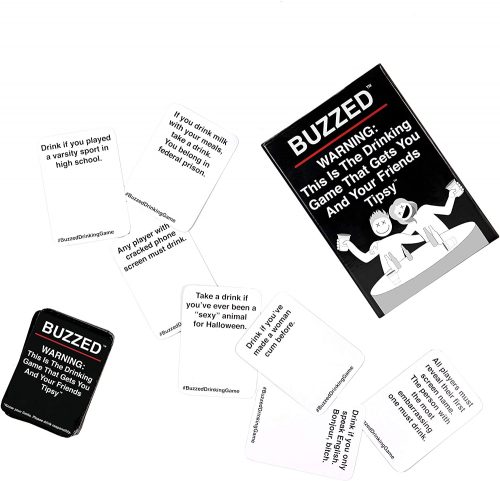 Three Man involves at least two dice and three participants. Players will take turns rolling the dice until one person rolls a three and becomes the titular Three Man. From there, each player will take turns rolling the dice, with each number determining a different outcome: Three means the Three Man drinks, seven means the person left of the dice roller drinks, nine means the person to the right of the dice roller drinks, 11 means the roller drinks, doubles means you get to take that number value and distribute drinks accordingly. This set of dice from RERIVER comes with a felt dice can, making it easy to play the game and not have the dice go flying off the table. 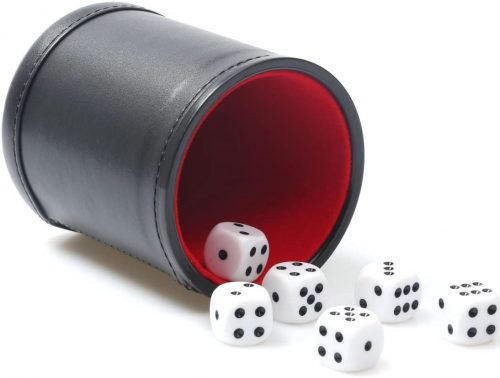 11. Never Have I Ever Drinking Card Game

The game you most likely played as a teen comes home in a card-game form that makes it easy to think up question to get to know your friends better. Famously played on Ellen, the game comes with a set of rule cards that enhance the playing of the rounds and play cards that entice participants to own up to some of the worst decisions they’ve ever made. Attach some drinking rules to it like having those who have done the action take a sip and so forth. 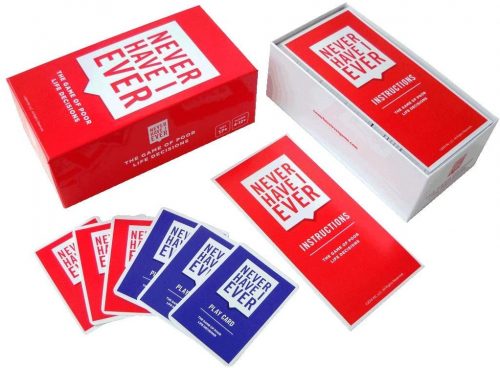 Amazon
Buy: Never Have I Ever Drinking Card Game $24.95
buy it

If you enjoy a good board game but wish there was more of a chance to drink while you roll the dice, well, Drink-A-Palooza is the game for you. The game actually functions as a way of combining a bunch of other drinking games (including Pong, King’s Cup, Flip Cup, and more) into one game. You’ll move around the board, landing on spaces that will determine which drinking game you’ll be doing Plus, with the ability for up to 12 players, there’s plenty of fun to go around. 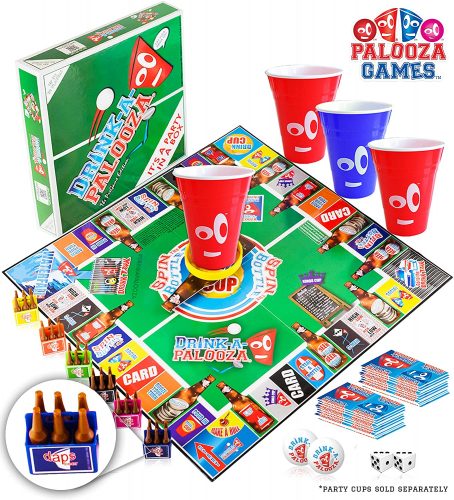 Implicate. Advocate. Adjudicate. That’s the name of the game in the drinking card game Drunk, Stoned, or Stupid. 250 prompt cards will let you and your friends determine whom among your group is the most likely to do a given thing such as “wake up with half a burrito in bed” and so forth. Once you draw a card, it’s up to the group to determine who best fits the description, letting the accusations fly. Plus, the card-based nature makes it easy to play in person or over Zoom! 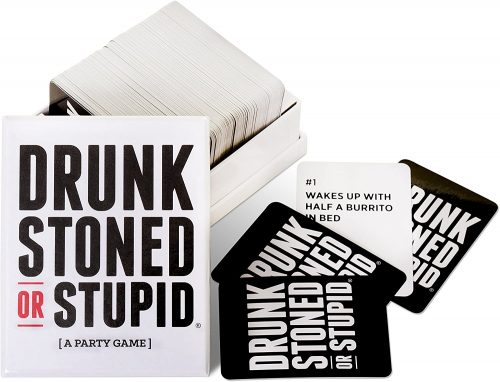 Drinking games are always more fun when there’s a bit of risk involved, which makes this drinking glass roulette game from Bo-Toys a great option for those looking to up the stakes with their drinking games. The small glasses around the edge of the roulette wheel can be filled with all kinds of different alcohol, letting fate determine your drinks for the evening. The possibilities to torture your group with awful spirits are relatively endless. 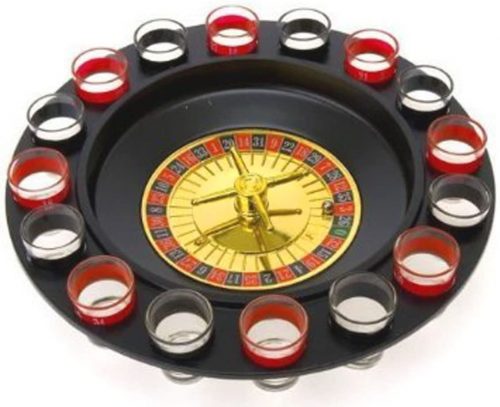 Remember playing spin the bottle? Well, spin the shot takes the infamous game of youth and puts a decidedly adult spin (no pun intended) on the well-worn classic. Simply load the included shot glass with whatever is your spirit of choice, or a particularly tasty mixed shot, and spin it to determine who has the honor of downing the drink. The arrow determines who the lucky participant will be and allows for as much fun as you can safely have. Plus, it’s small enough that you can easily take it with you to the bar and play there. 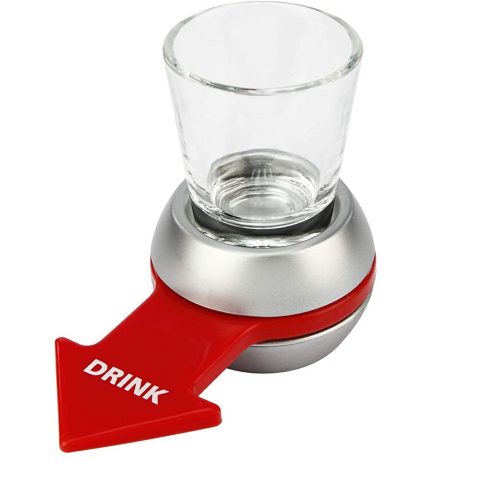 The Best Light Beers for Your Drinking Games