Sure, ginger beer is a must-have ingredient for making Moscow Mules, but it’s so much more than that. Fizzy and tasty, it’s no wonder people have been growing fonder of them. But did you know that ginger beers have been around for quite some time? In fact, the origins can be traced to the 18th century, when the beverage was popular all across the British Empire.

While most commercial drinks nowadays don’t contain alcohol in their formula anymore, ginger beers are still used in a variety of cocktails to add a well-marked spicy kick. There are tons of imitators out there, which is why we’ve rounded up our top picks for the best ginger beer brands on the web. In this article, we’ll cover:

Before we get into the best ginger beers for your enjoyment, let’s clear up the biggest question surrounding ginger beer. What’s the difference between ginger beer and ginger ale?

Ginger beer and ginger ale are quite similar, but if you’ve indulged in both, you know that ginger beer has a stronger ginger bite. Beyond the taste, the major difference between the two comes down to how they are made.

While both can be used as mixers for alcoholic cocktails, ginger beer is generally preferred due to the fact that its stronger taste easily masks the unpleasant edge in most alcohols.

If you’re ready to try ginger beer in a bottle or can, read on. From spicy to sweet, check out these high-rated brands and start sipping today.

Unlike other ginger beers, this one’s not too sweet. In fact, it’s definitely on the more mild side of the spectrum, which makes it a great mixer for Moscow Mules and whatnot. Naturally sourced and made with three types of ginger from Nigeria, Cochin and the Ivory Coast, it’s a great middle-of-the-road choice that’s sure to satisfy any palate. Unlike other brands, this one’s particularly smooth too. 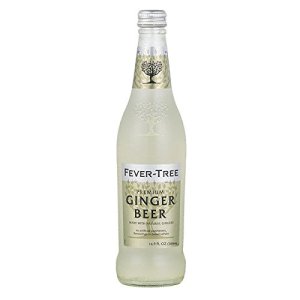 If you want to add a little extra flavor to your ginger beer, you can’t go wrong with blood orange. The citrus pairs well with the spiciness of the ginger, which is why Bette Jane paired the two ingredients together in their Blood Orange Ginger Beer. Handcrafted in California, this blend of blood orange, ginger and pure cane sugar produces a not-too-sweet mixer that will certainly add a twist to your Moscow mule or dark n’ stormy. 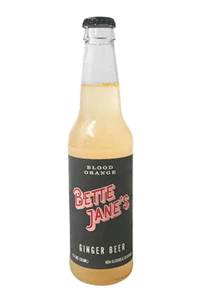 The House of Stolichnaya isn’t just known for producing vodka. The company also brews wonderful ginger beer, including this diet version, to go with their own vodka, of course. Made with ginger extract and other all-natural flavors, this mixer has zero calories and is gluten-free. Yet, even though it creates a lighter, healthier version of the Moscow mule, Stoli’s diet ginger beer packs a punch of flavor. You won’t even notice you’re drinking diet. 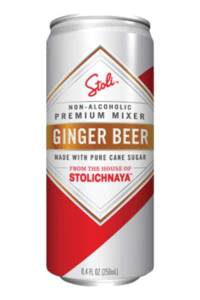 This bold zero-calorie ginger beer is great to drink alone or as a mixer in your favorite cocktail. Sweetened with only Stevia, it is flavorful and contains zero sugar and zero artificial sweeteners. It is naturally gluten-free, Non-GMO, Kosher, and vegan as well. 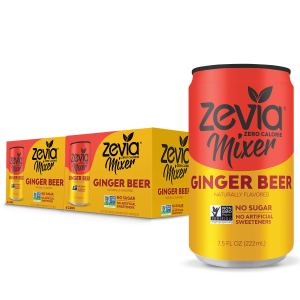 Brewed in the Jamaican tradition, Reed’s Extra Ginger Brew contains only all-natural ingredients. It’s made with ginger, honey, spices and other natural juices. Plus, because this is the “extra ginger” version of their brew, this bottle contains twice as much ginger as the normal brew. That’s an incredible 26 grams of ginger in each bottle. But if you want an even stronger ginger bite, check out the Reed’s Strongest Ginger Beer. As an added bonus, this mixer is available in either a four or 24 pack of 12-ounce glass bottles. 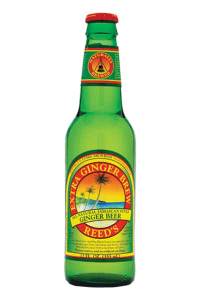 Back in the 1940s, Cock ‘N Bull Ginger Beer was invented by Jack Morgan, owner of the famous Cock’n Bull restaurant in Hollywood, California. At that time, ginger beer was popular in England but hadn’t yet found a foothold in America. In order to market his product, Jack Morgan teamed up with Smirnoff vodka owner John Martin to create the Moscow Mule, which was named for the capital of Smirnoff’s home country and the added kick ginger beer provides. Today, the Cock N Bull Ginger Beer is one of the best reviewed options available on Drizly. Reviewers note that this is a ginger beer with a strong, sharp bite. However, it’s not overly sweet like some competing options, making it a strong mixer for Moscow Mules and other cocktails alike. 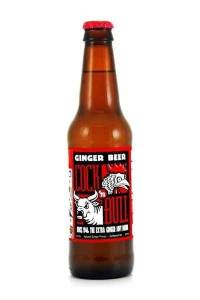 Regatta is unique for brewing their ginger beer using an authentic Bermuda tradition, which allows both Caribbean and African ginger to ferment with sugar, water and yeast in stone crocks. This creates a brew that has the normal bit of ginger beer without the peppery “ginger burn” found in many Caribbean-styled ginger beers. In addition to strong notes of ginger, you’ll also taste softer notes of citrus, banana and apple in this well-balanced beverage. Buy this ginger beer for a taste of island spice. 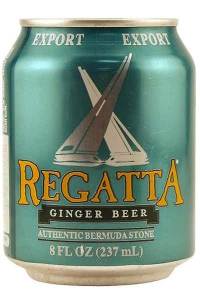 Did you know that ginger beer was originally alcoholic? Some claim the transition to the non-alcoholic beverage occurred in England in the late 1800s or early 1900s, while others say alcoholic ginger beer was a victim of Prohibition. Either way, it’s difficult to find an alcoholic version these days, which is why the Wild Ginger Beer is so special. This spicy, slightly sweet drink can be enjoyed on the rocks with a squeeze of lime or straight out of the can. The best part is that ginger beer doesn’t have a beer aftertaste thanks to the spiciness of the included ginger. 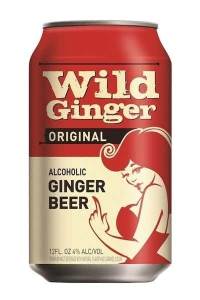 When it comes to the best ginger beer brands, Barritt’s is consistently rated at the top of the list. It’s not surprising — this original formula is spicy yet smooth, serving up bold flavor that packs a unique zest you’re sure to love. Drink it with beer, rum, tequila, sangria and more. Whatever way you prefer to drink it, you win. It’s becoming harder to find on Amazon (especially now), so you won’t want to hesitate here. 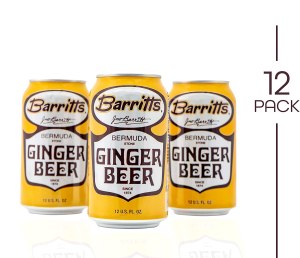 For when you want to have your ginger beer and soda too, Q Mixers is a must. Unlike other bottles and cans that are made specifically as mixers, this ginger beer is tasty enough to work well on its own, without any extra additions. Not only does it stay fizzier for longer (which is a definite plus), it also swaps the high-fructose corn syrup for the more natural (and organic) agave. This gives it a much smoother feel and is definitely pretty tasty. 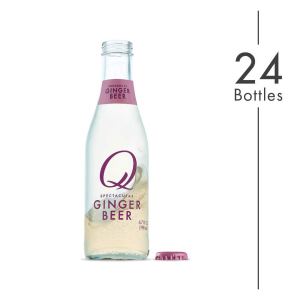 Easily one of the most popular (if not THE most popular) ginger beer brand in The Land Down Under, Bundaberg is one of the few ginger beers that’s both spicy and smooth. Add it to your favorite drinks, sip it on its own — whatever you choose, you really can’t go wrong with Bundaberg. This particular box comes with four bottles, but because it’s imported, prices are like to fluctuate. 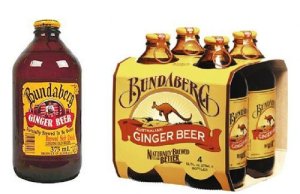 Made with organic ginger, organic lime juice, cane sugar, and more, this thick and syrupy ginger beer is the perfect way to top off your favorite mixed drinks of choice. While it’s made specifically to be added to Moscow Mules and other cocktails, it only takes a few drops to do the trick. Sure, we guess you could try drinking this one on its own, but we definitely wouldn’t recommend it. 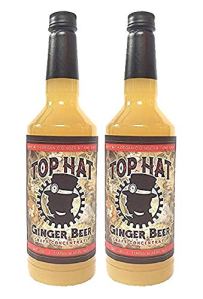 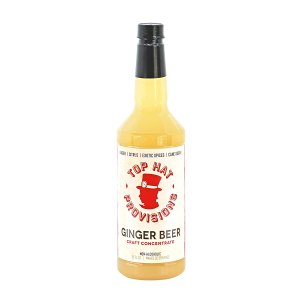 For a ginger beer that isn’t too sweet and won’t give you a sugar rush, try the TrueRoots Ginger Beer with Lime. This brew contains zero sugar, replacing the sweetener with Lakanto monk fruit grown in the remote mountains of Guilin, China. The monk fruit is mixed with real Fiji ginger and juice from Californian limes to create a skinny version of classic ginger beer. Alternatively, if you don’t care about eliminating sugar, TrueRoots also makes a strong ginger beer with 26 ounces of ginger in each can as well as a cucumber and passion fruit flavored option. 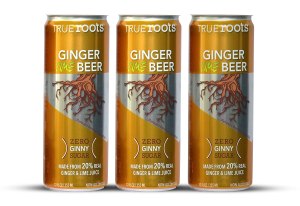 Sure, this beer was made specifically for Dark ‘N Stormy drinks, but the fact that it’s made with all-natural flavors, has zero calories and, you know, still tastes great is enough to warrant a spot on our list. This particular listing comes in packs of 24, so there’s more than enough to go around. Unless you’re planning a party, in which case you may need to order another round. 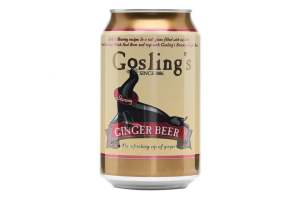 The Cawston Press Sparkling Ginger Beer is one of the best for enjoying on its own, straight from an ice-cold can. That’s because Cawston Press has only included all-natural, freshly pressed ingredients in each can. This dry ginger beer includes the juice of ginger root and pressed apples along with a little fizz. There is no added sugar or artificial sweeteners in the mix. While they’re definitely on the expensive side of things, Cawston Press sodas and ginger beer are worth trying for an extra special treat. 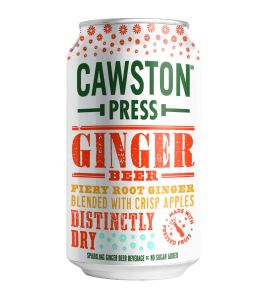 Your everyday soda beverage has nothing on this ginger brew. Made with carbonated pure water, Fair Trade certified organic cane sugar, a plethora of spices and no caffeine, this drink offers a well-balanced flavor in just about 165 calories per bottle. Perfect by themselves or mixed with your spirit of choice, these frizzy sodas are sure to satisfy your ginger cravings. What’s more, the company even helps give back to the communities of farmers who grow the sugar cane in Brazil. If you want to combine taste and giving back, this drink is it. 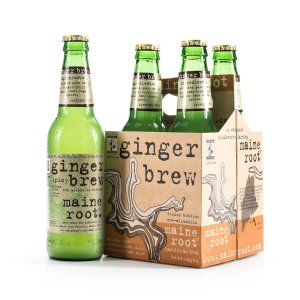 Ginger beer in the USA has been marketed as a mixer since at least the 1940s. Sure, you could enjoy it on its own over ice or from a chilled can, but the extra spicy flavor lends itself to cocktail and mocktail blends. Here are a few of our favorite ginger beer concoctions.

Probably the most popular ginger beer cocktail, the Moscow Mule combines ginger beer, vodka, lime juice and crushed ice. Served in a copper mug, this cocktail can be found in bougie bars across the States.

As the second most popular ginger beer cocktail in the USA, the dark n’ stormy is gaining recognition. To make this cocktail, mix ginger beer with dark rum and serve over ice. Add a splash of lime juice if you’re feeling fancy.

Move over margarita; this might just be the best summer cocktail ever invented. The añejo highball requires ginger beer to be mixed with bitters, orange curaçao, aged rum and lime juice, then served over ice in a highball glass.

The fun doesn’t stop there. Gin, whiskey and even tequila can be mixed with ginger beer to create amazing cocktails. Get yours today and start creating the cocktail of summer 2020.