There is no condiment that invites as much debate as hot sauce. Pardon the expression, but it can get pretty heated. To say it’s simply a matter of preference downplays how seriously people take their hot sauce. Hot sauce fans don’t have “preferences.” Preferences are for weaker condiments. Hot sauce enthusiasts will stake their entire identities on the Cholula/Tapatio divide and square up over Scovilles. But with so many options out there, it can be hard to find the one that’s best for you if you’re not already totally immersed in hot sauce culture. Or maybe you already are a hot sauce connoisseur who is looking to expand your palette and subject it to a new, fresh hell.

One of the major factors in choosing a hot sauce is the heat level, which is measured in Scoville Heat Units (SHU), or Scovilles for short. The bell pepper is 0 Scovilles, and the Carolina reaper is somewhere in the 1.5 million SHU to over 2 million SHU range. Between that range is a bunch of peppers, including the ever-popular habanero, which is 150,000 SHU. But if heat was the only factor to consider, there wouldn’t be as many hot sauces are there are.

There’s a ton of variety in how peppers taste, and producers put a bunch of other ingredients like mustard, vinegar, and fruit, which all affect factors like sweetness and tartness. Plus, consistency-wise, hot sauces can range from as liquidy as soy sauce to as viscous as ketchup. You’ll also want to consider the broad regional sub-groups like Louisiana hot sauce, Mexican hot sauce, and Asian chili sauce, all of which have foods that they pair best with.

If you’re looking to try hot sauces that aren’t as widely available at grocery stores, check out one of these options on Amazon. They include some dangerously hot picks from brands like Mad Dog and Da Bomb, as well as flavorful classics from supermarket staples like Cholula and Frank’s. Even if you’re not big on really spicy food, brands like Kumana, Truff and Mike’s Hot Honey are worth checking out for their mild but flavorful takes on hot sauce. Try one, or buy them all and line them up, “Hot Ones”-style.

If you’re all about the heat, then Mad Dog 357 is a great option. It clocks in at 357,000 Scoville Heat Units, so a little bit will go a long way. This hot sauce is hot enough that it will cause a physical reaction in amost everyone, and inexperienced hot sauce eaters may experience stomach pains and intense sweating. Mad Dog isn’t just about heat, though. The blend of cayenne, habanero, garlic and onion ensures that it also tastes good, too. And the aggressive branding should be enough to warn you how intense this sauce is.

Pros: Good option for those who like extreme heat, with enough flavor to support the heat.

Cons: Somewhat expensive for a 5 oz bottle. Will be too painful for casual hot sauce fans. 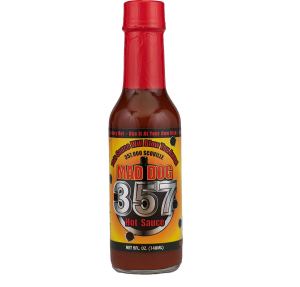 We’d be remiss not to mention at least one Mexican-style hot sauce on this round-up, and the widely available and always-delicious Cholula is one you can always count on. While the original Cholula is easy to find, the variants take some tracking down. That’s what makes this variety pack such a good option. The five included bottles are Original, Chili-Lime, Chili-Garlic, Chipotle, and Green Pepper. Suffice to say these sauces would be a perfect addition to taco night.

Cons: There can sometimes be issues with packaging. 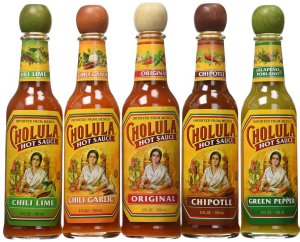 Truff has shaken up the hot sauce space with their original take on hot sauce. In their own words, their sauce is not designed to deliver “the spiciest, hottest sauce on the planet.” Rather, Truff is all about combining sophisticated gourmet ingredients with hot sauce staples like red chili peppers. That includes organic agave nectar. But the true standout is the inclusion of black truffle oil, which brings a unique flavor to anything you add it to. 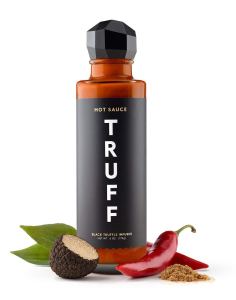 Huy Fong’s sriracha hot sauce has been manufactured in Southern California for decades, and the instantly recognizable green-capped red bottle has made it a cultural icon. Its thick consistency and robust vinegar and garlic-tinged flavor make it a great companion for Asian-inspired meals. It can also be used in tons of recipes or to make dipping sauces like sriracha-mayo. Two 9 oz bottles are included in this order.

Pros: Comes with two bottles. Thick consistency makes it good for mixing into homemade sauces or adding to other foods.

Cons: 9 oz bottles are smaller than the standard 17 oz bottles. 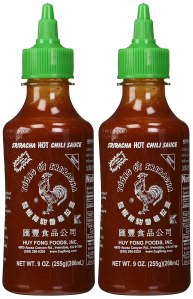 Guacamole and hot sauce enhance any Mexican-inspired meal, whether that’s tacos, burritos or nachos. The geniuses at Kumana took the natural pairing to the next level by bottling it. This avocado sauce delivers a kick of heat thanks to the addition of habanero. It’s also available in mango habanero for an extra hint of sweetness. It’s Non-GMO, keto-friendly and lean on calories. The sauce delivers a medium-heat, which is a good option if you want a sauce that has a hint of spice without being overpowering.

Cons: Some may prefer more heat. 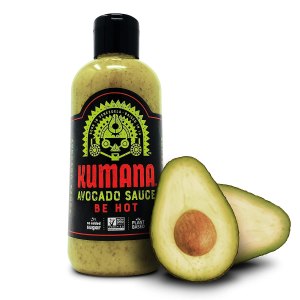 Even if you’ve only seen one episode of “Hot Ones,” you probably remember Da Bomb. It’s the sauce where things start to go awry for a lot of guests, so it’s one to be careful with. If you like very hot sauces, this is a good option. The 4 oz. bottle should last a while, even for heavy hot sauce users. Just a dab should do the trick.

Cons: Not much flavor aside from the intense heat. Can cause stomach pains and burning sensations that fade slowly.

There are a lot of sauces that increased in popularity thanks to the YouTube show, “Hot Ones,” and Secret Aardvark habanero sauce is one of them. It comes in an 8 oz. squeeze bottle, and the blend of mustard, white wine vinegar, and habanero chili peppers makes for a flavor that’s described by the brand as a “unique Caribbean Tex-Mex hybrid.”

Pros: Flavorful habanero blend, good for people who like a thicker consistency. Spicy but not overwhelming.

Cons: Sauce is somewhat thick for the small nozzle size.

For something that’s a little different from hot sauce, but still will deliver a kick, this Hot Honey is pretty much exactly what it sounds like: honey infused with peppers. Sweet and spicy is one of those immensely delicious if slightly confusing flavor combinations, and this Hot Honey can go with a lot of different things — they even suggest ice cream. We like using it as a marinade too for chicken and steaks.

Pros: Unique combination of honey and hot sauce, offers a sweet and spicy blend; heat is not overwhelming.

Cons: It’s worth noting that it is not actually hot sauce, but honey infused with peppers. 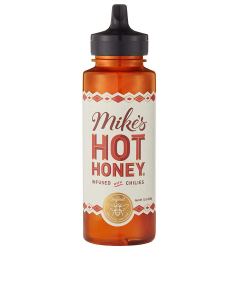 Today, hot sauce is very much on-trend. That means there’s no shortage of gourmet concoctions featuring unique ingredients like avocado, exotic and downright painful peppers, and luxury ingredients like truffles. However, a hot sauce doesn’t need to be complicated to get the job done, which is why Tabasco absolutely deserves a spot on this list. For over 150 years, the McIlhenny Company has been bottling hot sauce at its facility on Avery Island, Louisiana. Even the specialty flavors feature a handful of simple ingredients: distilled vinegar, peppers and salt. The simple flavor profile is perfect on eggs, Mexican food and southern food. Equal parts sour and spicy, Tabasco is a classic American hot sauce that’s more than earned its spot on your kitchen table.

Pros: Made from a short list of familiar ingredients. Formula unchanged for 150 years. This variety pack includes all of the brand’s most popular flavors.

Cons: Strong vinegar flavor. On the lower end of the heat scale. 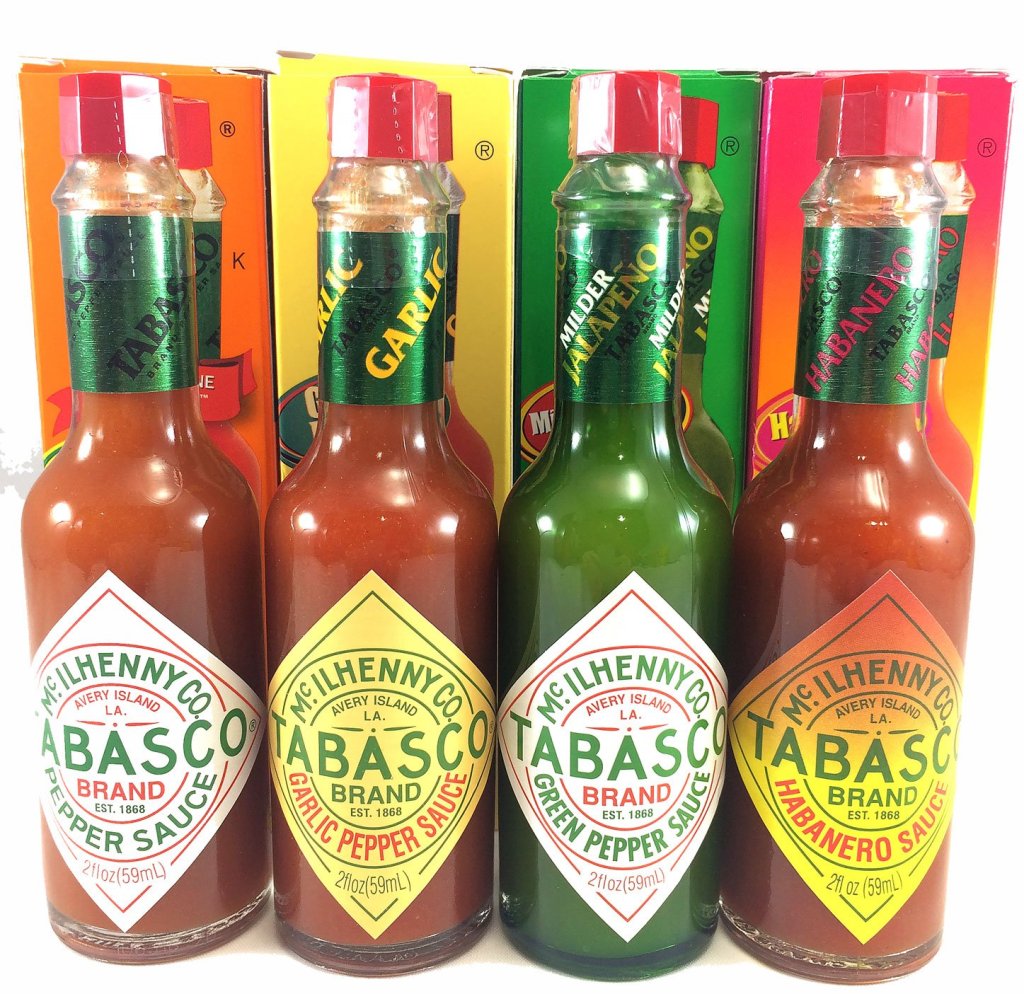 Frank’s RedHot is one of the most widely available and popular hot sauces, used on everything from hot dogs to well, as their commercial goes, “on everything.” This serving of Frank’s comes in a gallon bottle, which is economical and convenient. As for the sauce, it’s made from aged cayenne peppers, so it provides some heat but isn’t overwhelmingly spicy.

Cons: Sauce will need to be transferred to a more ergonomic container for daily use. 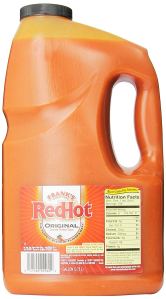