Pressure cooking has been around for a long time; its history dates back to a rather dangerous machine called the Digester which was invented in the 1600s. But many people are pretty unaccustomed to pressure cooking. That’s especially true for the Instant Pot. After all, as many centuries as pressure cooking has been around, the Instant Pot is only about a decade old. In that short time, it’s managed to become tremendously popular. So why should you get in on this trend? No matter your cooking skill or amount of time you have to cook, there’s an Instant Pot recipe out there for you.

The wonder of the Instant Pot is how many different things it can do. The Ultra, the brand’s most expansive model, has 10-in-1 functionality. On top of that, the Ultra comes with 16 built-in smart programs. Instant Pot’s less advanced models are nothing to sneeze at, either. Even the most basic model, the Lux, has 6-in-1 functionality.

Included functions of an Instant Pot range from slow cooking, steaming, sauteing, and some models can even make yogurt, rice, and cakes. It’s pretty impressive how many things one compact appliance can do. But frankly, it’s also a little overwhelming.

Considering that the Instant Pot is a whole new way of cooking food for many people, it can be hard to even know where to begin. That’s why if you’ve bought an Instant Pot as a gift for someone, you should also consider adding on a cookbook as a gift. If the recipient doesn’t know how to use the machine, they might just end up never bothering to learn. But a cookbook will allow them to figure out the machine and put them on track to making a variety of delicious meals in no time.

Whether you’re gifting a cookbook to someone, or you’re just looking to explore the capabilities of your Instant Pot, we’ve rounded up some great cookbooks. Many of them include Kindle versions, too.

If you’re looking for a general cookbook to try out new recipes, this is a good option. It’s also a good option as a gift to someone, because it has well-shot color photos of the meals. There are 75 meals in the recipe book, and they’re divide by intuitive categories like “Beef and Pork,” “Poultry,” and “Beans and Grains.” The cuisine is international, too, and includes dishes like “Korean Braised Beef Short Ribs.” The instructions are written to be clear and thorough.

Pros: Book features good-looking and well-shot photography, in addition to high-quality paper, making it a good gift for someone else. The instructions are clear and thorough as well. 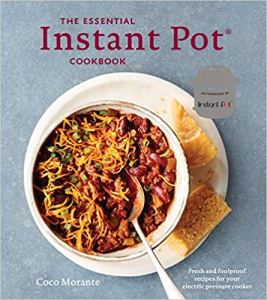 This book by Laurel Randolph is one of the most popular options for Instant Pot cookbooks. It’s available on Kindle or as a paperback. Included are over 100 meals, including options for vegetarians, and those on gluten-free or Paleo diets. The recipes are also broken up into several sections, including “fast food for good health,” “breakfast,” “seafood and poultry,” and best of all, “dessert.” The recipe book also includes an easy reference for how long preparation takes.

Pros: Over 100 recipes that are separated by meal and food type, including breakfast, vegetables, and dessert. The cookbook also makes it easy to find vegetarian, paleo, and gluten-free recipes, as well as recipes that don’t take too long to prepare.

Cons: Cookbook doesn’t have photos of each of the meals; there are only photos between the chapter sections. 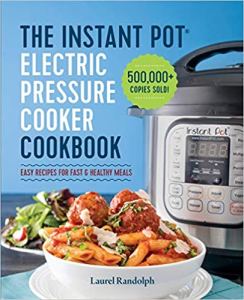 If you like to try a lot of new recipes, this cookbook is a good option. It has 500 total recipes, so you try something new every day and still not run out of ideas for a long time. It comes in Kindle, paperback, or a more expensive spiral-bound version. Included are recipe options for vegetarians. The recipes are separated by food group type, including rice, turkey, and beef.

Pros: Includes 500 meals, which is an impressively large amount of recipes. There are also plenty of good recipes for vegetarians included. 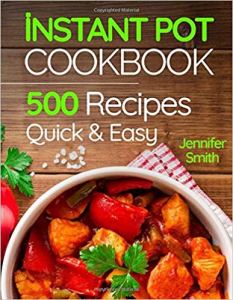 Indian food from a restaurant can be delicious, but there’s no need to limit your experience with it to just takeout. Whether Indian food is a newfound obsession or you grew up eating it, this cookbook offers delicious ways to prepare traditional meals for yourself and loved ones. The recipe book has 50 recipes, including traditional dishes and crowd-pleasers like Chicken Tikka Masala.

Pros: A good way to explore a rich culinary cuisine, whether you grew up on Indian food or you’re new to it. The cookbook is also designed to make complicated recipes easier.

Cons: Has 50 recipes, which is less than some of the other cookbooks on this list. 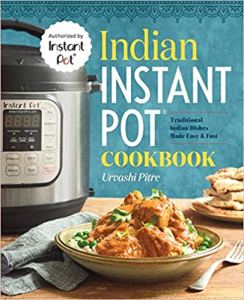 5. The Ultimate Vegan Cookbook for Your Instant Pot

If you live a vegan lifestyle, you may have been forced to relegate yourself to the handful of vegan recipes most cookbooks offer. That’s why this cookbook is great for vegans; all of the included recipes are vegan. It’s available in paperback, Kindle, or a more expensive spiral-bound version. The cookbook consists of 80 recipes, and it’s divided into a few different categories, including recipes with whole grains, bean and lentil recipes, and fast meals.

Pros: This book is a good option for those on vegan diets. The chapters are broken up by various helpful categories like recipes that are fast and easy, as well as recpies that are organized by ingredient type. The book also has pictures.

Cons: Many of the recipes have a lot of ingredients, so it may not be ideal for beginners. The book only contains 80 recipes, which is less than many of the other options. 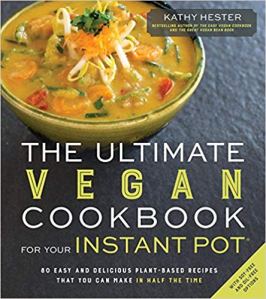 The Ultimate Vegan Cookbook for Your Instant Pot

If you’re something of a romantic, this book is organized around meals for two people. It’s divided by meat group; there are individual sections for chicken, beef, and pork, in addition to vegetarian, vegan, and breakfast categories. The book does have photos, although they’re small and printed in black and white. The book also provides nutrition facts for each meal.

Pros: This is a good option if you’re cooking for two people. It’s intuitively organized by protein group, including beef, pork, chicken, seafood, and vegetarian and vegan meals.

Cons: Photos are small and in black and white, so it’s not necessarily the most giftable book. 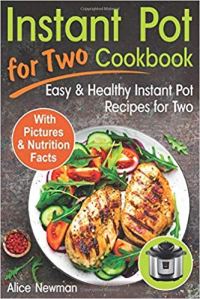 Despite how many Instant Pots cookbooks there are, there’s a surprising lack in diversity: most focus on the larger models. That’s why this book is great for owners of the three-quart model. The recipes are proportioned to fit mini Instant Pots, so you can spend less time doing conversions. There are 100 recipes, and they have an array of offerings including hearty favorites like Mississipi Pot Roast and delicious sweets like raspberry coffee cake.

Pros: There are very few cookbooks for owners of three-quart Instant Pot models, which is why this cookbook is such a great option. There are 100 recipes that are all proportioned for three-quart pots, including breakfast and dessert recipes.

Cons: Some of the recipes produce too many servings for what most people use a three-quart for, which is feeding one to two people. 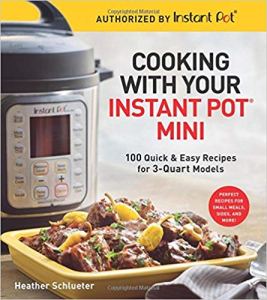