Since Starbucks introduced their nitro cold brew to select stores back in 2016, this rich and frothy drink with low calories and no allergens has become increasingly popular. In fact, most national coffee chains now serve their own version, and there is a booming market for at-home nitro cold brew makers as well as a pre-made, canned nitro cold brew.

This reinvention of cold coffee does differ significantly from regular cold brew and iced coffee in that its textured, frothy, smooth and very low in acidity. If those all sound like admirable qualities in your ideal coffee beverage, keep reading to learn more about the wonderful world of nitro cold brew.

In this article, we will cover:

So, without further ado, let’s discuss everything you need to know about nitro cold brew.

What is Nitro Cold Brew Coffee?

Nitro cold brew coffee is simply cold brew coffee infused with nitrogen to give it a velvety texture and a cascading, frothy crema (or head). While the taste is completely different, the texture is somewhat similar to that of a Guinness beer.

The nitro cold brew process also gives the coffee a creamy, slightly sweet taste without the need for added dairy or sugar.

How is Nitro Cold Brew Coffee Made?

Nitro cold brew coffee starts its life as simply coffee grounds and pure water. The grounds are left to soak in cold water for 12 to 24 hours. In contrast to traditional brewing which utilizes boiling water, cold brewing is less acidic, smoother and brings out the more subtle flavors in each bean.

Nitro cold brew can also be stored and sold in cans. In this case, the cold brew is usually put in the can along with a nitrogen widget that releases its gas when the can is opened, leaving the consumer with a fresh and frothy beverage. 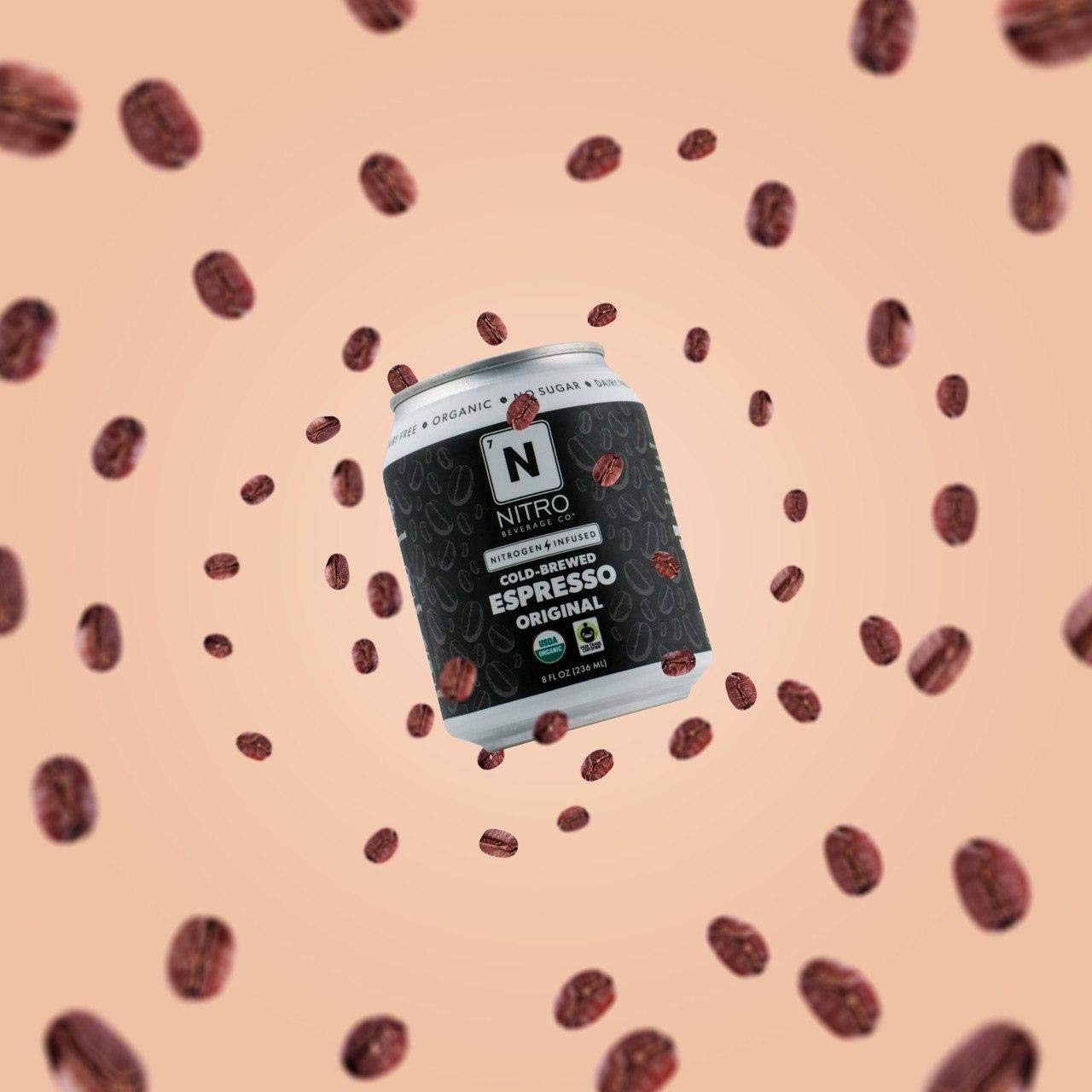 Nitro cold brew and traditional cold brew actually follow the same brewing process. In both cases, coffee grounds are steeped in cold, pure water for several hours (usually 12 or more). Therefore, you’ll get a lot of the same flavors in both manners of preparation when using the same beans.

However, nitro cold brew improves upon traditional, flat cold brew by adding nitrogen to the equation. This produces a thicker beverage that’s smooth and creamy. Many people enjoy the more substantial feel of nitro cold brew and claim that it tastes like a barista-crafted, milk-based coffee drink but without the calories, sugar or dairy.

Although most premade nitro cold brew can be stored at room temperature, it definitely tastes better cold. Chill the cans in the refrigerator, then, when you’re ready to drink your nitro cold brew, shake the can once or twice before pouring it rapidly into a glass. This will activate the nitrogen to create the drink’s desirable frothy, silky texture.

And, don’t forget to pay attention to the expiration dates. Nitro cold brew doesn’t have the same shelf life as many other canned beverages.

Now that you know a little bit more about nitro cold brew, let’s discuss the best pre-made options. Below we’ve listed the six best nitro cold brew products that you can buy to try in the comfort of your own home.

Caveman Coffee Co. was one of the first companies to can and sell pre-made nitro cold brew. That’s part of the reason why its version is one of the most popular and well-reviewed on the market today. The other reason is that Caveman Coffee Co. sells its nitro cold brew in 11.5-ounce cans, which are considerably larger than the standard seven-ounce cans produced by many competing companies. The coffee inside the can is made from sustainably-sourced South American coffee beans which have been soaked in pure water for 12 hours. The liquid is then canned along with nitrogen to create a velvety beverage that’s hard to resist. 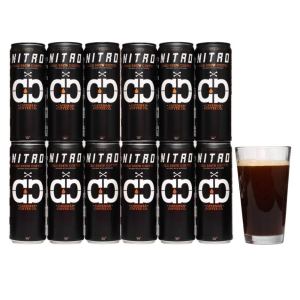 While drinking nitro cold brew on its own is enjoyable, adding oat milk to create a cross between nitro cold brew and a latte is divine. The Califia Farms manages to accomplish this in a shelf-stable, canned beverage known as the Nitro Cold Brew Coffee Oat Milk Latte, which makes them somewhat like miracle workers in our opinion. Each can includes a nitrogen widget that stores the gas until the can is opened, leaving you with a frothy mixture of strong cold brew and allergen-free oat milk. This is an ideal alternative to the iced latte you buy at $5 a cup from the local coffee shop. 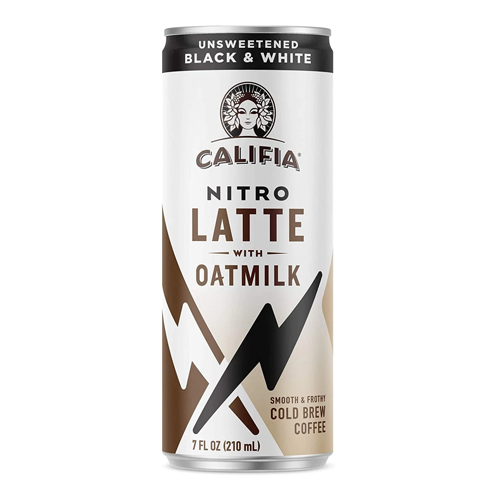 We can’t write about nitro cold brew without talking about Starbucks. The coffee giant really brought nitro cold brew to the main stage when they released their in-house version in select cafes in summer 2016. Until then, very few people had ever contemplated adding nitrogen to coffee. But when the Starbucks taps began serving up such a delicious and unique coffee beverage, people couldn’t resist. Today, you can buy the Starbucks Nitro Cold Brew in cans to enjoy in the comfort of your home. 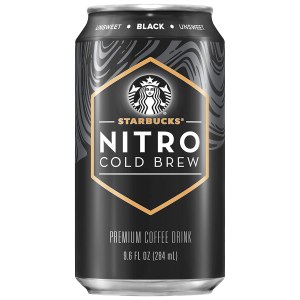 The ingredients list of the RISE Brewing Co. Nitro Cold Brew is simple. It contains only purified water and organic coffee along with a nitrogen-filled widget for creating a cascade of wonderous froth when the can is opened. The award-winning coffee is cold brewed from USDA-organic coffee beans imported from Peru. The brewing process creates a product that’s 70% less acidic than your typical cup of joe. When combined with the velvety texture of nitro, this less acidic coffee creates a beverage that’s easy to drink and feels luxurious on the tongue. 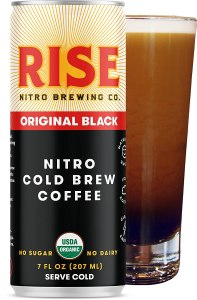 In addition to being fair trade and organic, the NITRO Beverage Co. Cold-Brewed Espresso is also the strongest beverage in terms of caffeine on our list. To create this beverage, dark roasted beans are steeped for 24 hours in pure water. A nitrogen infusion is added to the resulting concentrate to create a drink that is creamy and rich out of the can. When enjoying this espresso, you can expect to taste notes of graham cracker and dark chocolate, making this a decadent, low-calorie treat that will give you a boost of energy when you need it most. 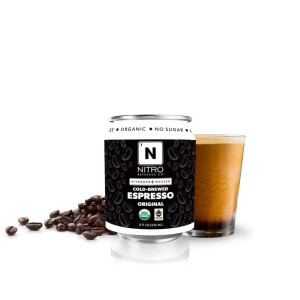 It might sound really strange, but the La Colombe Lemon Shandy is a delight to the senses. La Colombe has paired their nitro cold brew coffee made from pure Colombian beans with lemonade from ripe, Sicilian lemons to create a refreshing and uplifting beverage unlike anything you’ve tasted before. The silky, thick texture of the coffee makes this drink taste much more decadent than it actually is. In fact, each can only has 60 calories and offers a good dose of vitamin C thanks to the included lemonade. 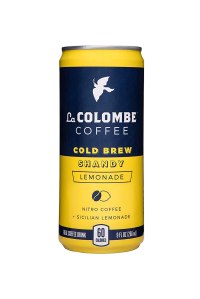