It doesn’t matter how old you are: S’mores are the absolute bomb. But if you’re anything like us, you seldom get to make them because you’re never near a campfire. That’s where some of the best s’mores kits can help turn just another night indoors into an evening of sweetness and childhood reminiscence.

The best s’mores kits will have everything you need to get your toasted marshmallow on indoors without burning the place down. That typically includes some kind of indoor-safe heating element as well as some kind of skewer or fork. Some kits include the raw ingredients too, but most don’t because it’s fairly easy to pick up the graham crackers, chocolate and marshmallows at just about any grocery store.

But in the interest of trying to make the next few months indoors as fun as possible, we’ve rounded up some of the best s’mores kits below. Every one of them, if not able to fully replicate the campfire experience, will at least give you some warm marshmallows and warm memories of days spent outside with a tasty s’more at the end of the night.

We’ll be damned if this isn’t the sexiest, best s’mores kit we’ve ever laid eyes upon. The Uncommon Goods Indoor S’mores Fire Pit has exactly what we want in a s’mores kit: a live fire pit that’s easy to use, clean and modern design for our millennial sensibilities, six stainless steel skewers and a glass votive to hold extra or dirty skewers.

It couldn’t be simpler to use either. You just fill the concrete fire pit with five ounces of 70% isopropyl alcohol or vodka and light it up. That’s literally it and the fire will burn for 50 minutes, without making any kind of soot or mess. Being able to use isopropyl alcohol and vodka is also super convenient because they’re much cheaper than the canned fuels you’ll need for other s’mores kits.

Good things aside, there are a couple of other things to know before making this splurge. First, this s’mores kit costs exactly as much as you think it would cost if you doubled the number in your head, which is the long way of saying it’s exorbitantly priced at $175. We would also be remiss if we didn’t mention that you’re dealing with live fire here, so make sure you use the snuffer to fully extinguish the fire before refilling or calling it a night.

Overall, if you’ve got the money to spend, the Uncommon Goods s’mores kit is one of the classiest, best s’more kits you can get your hands on. 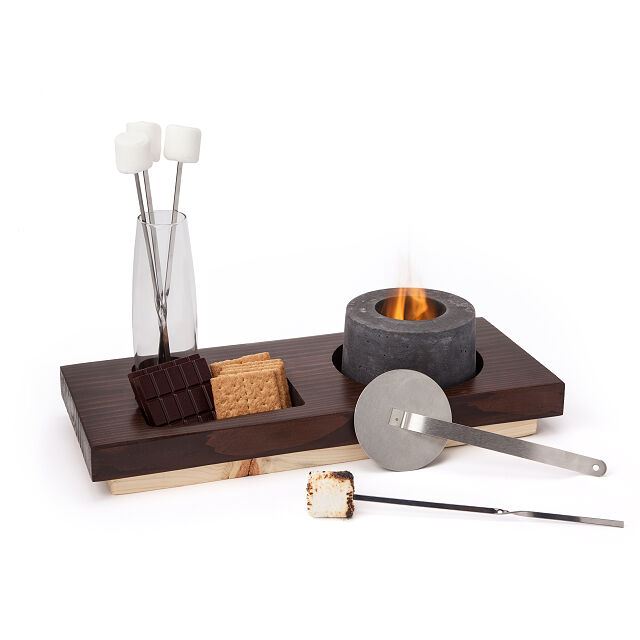 So you want a classy s’mores kit but you agree paying more than $100 for most things is absurd. You might enjoy the Chicago Metallic S’mores Maker.

The roasting chimney and the serving tray are made from a lovely ceramic, which can easily stand up to any heat from the fire for safe use indoors or outdoors.

But thankfully you get a complete set for your money here. You’ll get a metal grill top for the chimney to help keep the fire even, a metal burner and top to actually hold the fuel and fire, a snuffer to quickly put the fire out and of course four stainless steel roasting forks.

The only downside is you have to purchase the fuel separately, but overall, this is a modern s’mores kit with everything you need for s’mores indoors. We definitely think it’s one of the best s’mores kits for your money and are certain you’ll get a lot of enjoyment out of it. 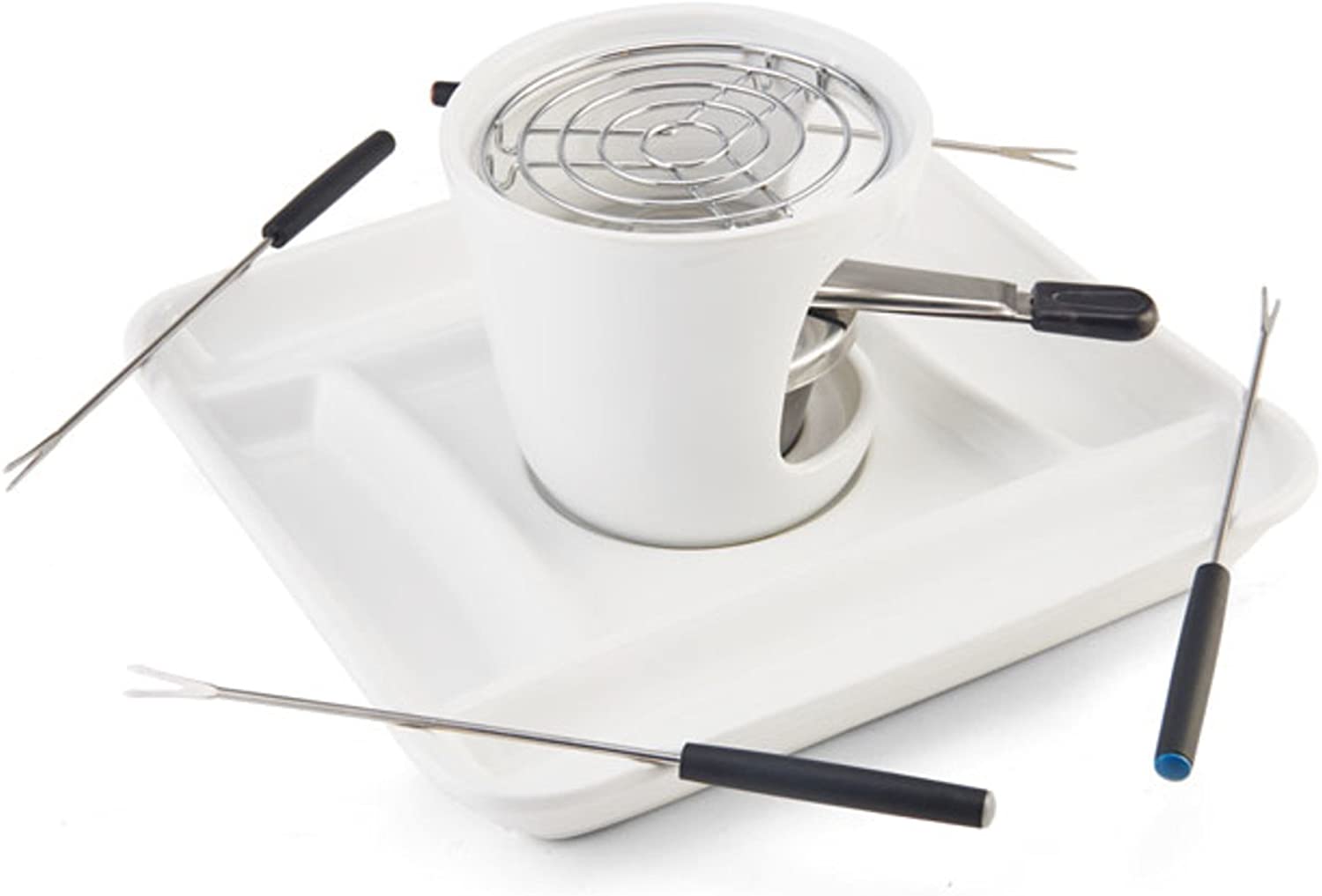 The kit is super basic, consisting of a tray with two s’mores stations, a roasting screen, two stainless steel roasting forks and one can of fuel, but it 100% works.

You just place the fuel in the center of the tray, light it up, pop the screen over it and you’re good to start toasting and roasting.

Sure, we admit it’s not a very classy-looking s’mores kit, hence the honorable mention, but if you’re just looking for the bare essentials to make s’mores indoors you can’t do any better than the Sterno S’mores Maker, which gives you everything you need out of the box except for the actual s’mores stuff.

You can pick up the Sterno S’mores Heat Fuel Cans just below or you can check out our pick for the best fuel at the bottom. 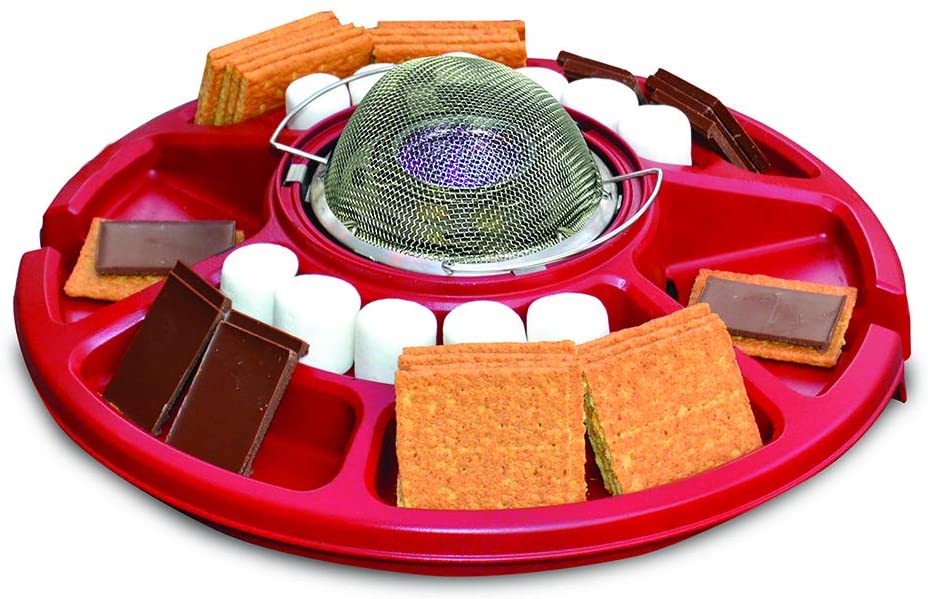 While we’re firmly in the camp of actual fire or bust when it comes to making s’mores, an electric s’mores maker costs a lot less in both the short term and the long term and is just a lot more convenient than any kits involving real flames.

The Nostalgia Indoor Electric Stainless Steel S’mores Maker plugs into the wall and starts heating with the flip of a switch for no-fuss indoor s’mores. The kit also comes with a serving tray with four compartments for ingredients and two roasting forks.

No doubt this is a basic package, but being able to make s’mores at home for under $20 is always a proposition worth considering.

If you don’t like that flame-burnt marshmallow flavor or just want the most convenient s’mores-making solution, the Nostalgia electric s’mores maker is definitely the best s’mores kit for you. 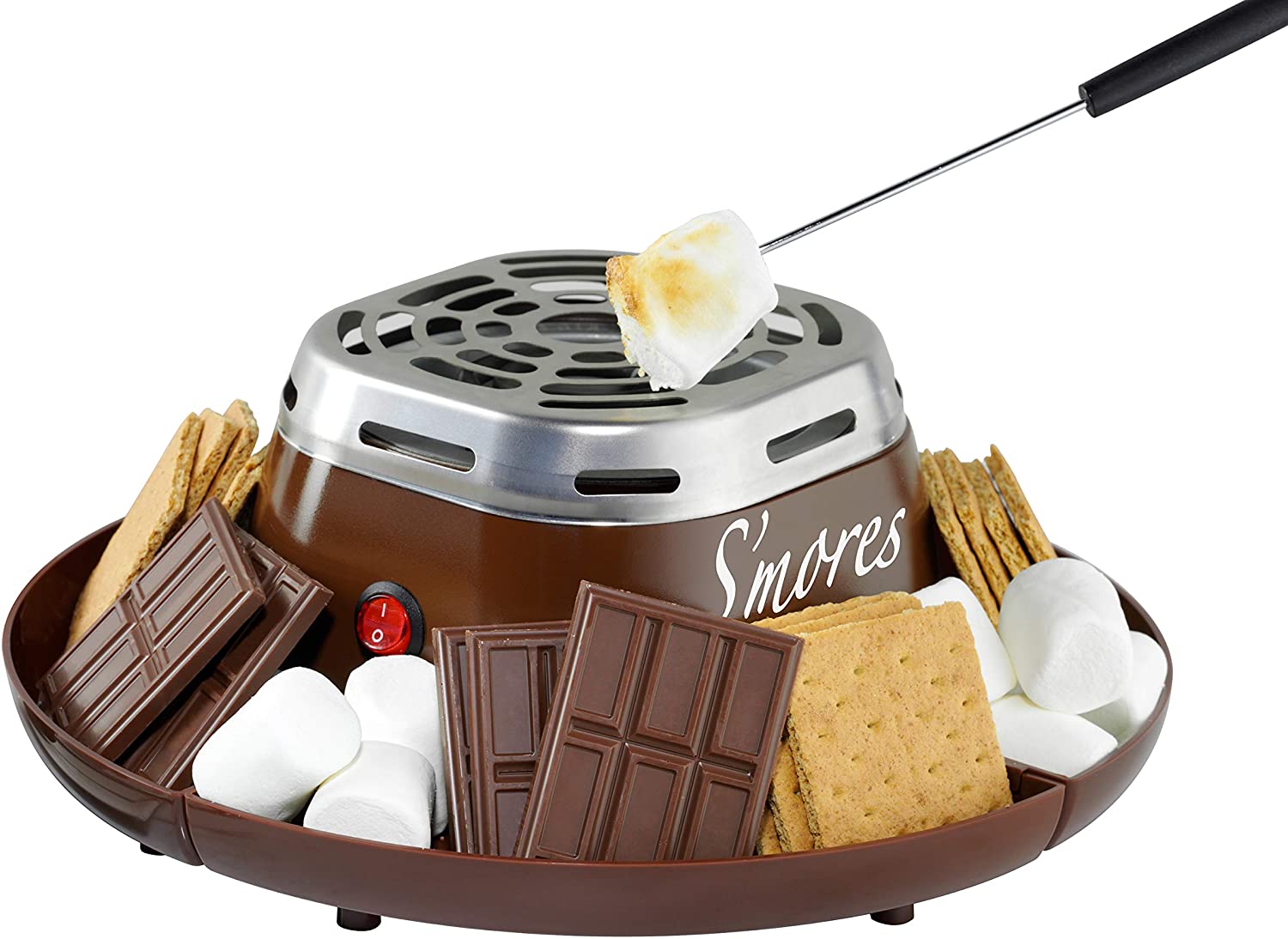 Any time you’re dealing with live fire or heating elements, you run the small risk of burning yourself or your possessions. But you eliminate that risk if you make s’mores in the microwave. That’s exactly what this neat little tool, the Progressive Prep Solutions Microwave S’mores Maker, will help you do.

It works in the opposite direction of normal s’mores making: You pour water into the reservoir to help with the melting process, assemble the s’mores, stick them under the little hands and throw them in the microwave. The arms press down on the s’mores as they soften and boom, in under 30 seconds, you’ve got two tasty s’mores in a quarter of the time and for a quarter of the effort for traditional roasted s’mores.

The maker is dishwasher safe too, which is super convenient because making s’mores under any circumstances can be a messy business.

There are only two downsides. You have to make sure to change the water after two uses; it’s not clear why, but we suspect it’s to make sure there’s sufficient water to help make the s’mores. The other downside is more subjective: Microwaved s’mores just aren’t the same as roasted s’mores, no matter how much more convenient they are.

But if you’re just craving quick s’mores on the cheap, the Progressive Prep Solutions s’mores maker is definitely the best s’mores kit for you. 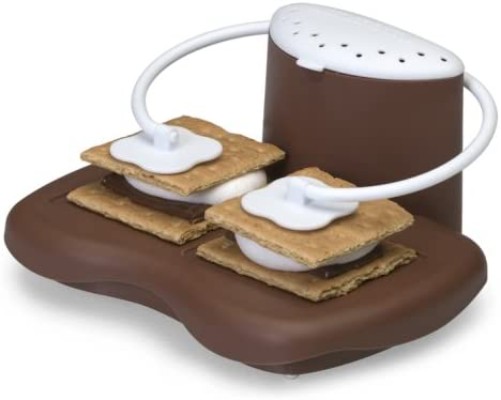 BEST FOR GRILLS AND OVENS

You’d think we’d covered all the best s’mores kits by now, but there’s one other great tool for making s’mores: The S’more to Love Six S’more Maker.

It’s basically a metal rack with six slots for s’mores that locks closed. That means you can basically use it to cook s’mores with any cooking appliance except a microwave. You can stick the whole thing over a campfire, set it inside a grill or even pop the rack into the oven for batch s’mores-making made simple.

As an added bonus, because the rack is made of metal, it’s easily washable and crazy cheap. Of course, because the s’mores rest inside the maker, don’t expect any forks or accouterments because you don’t need them with this.

If you’re looking for a multi-use s’mores maker, the S’more to Love S’more Maker will definitely be the best s’mores kits for you. 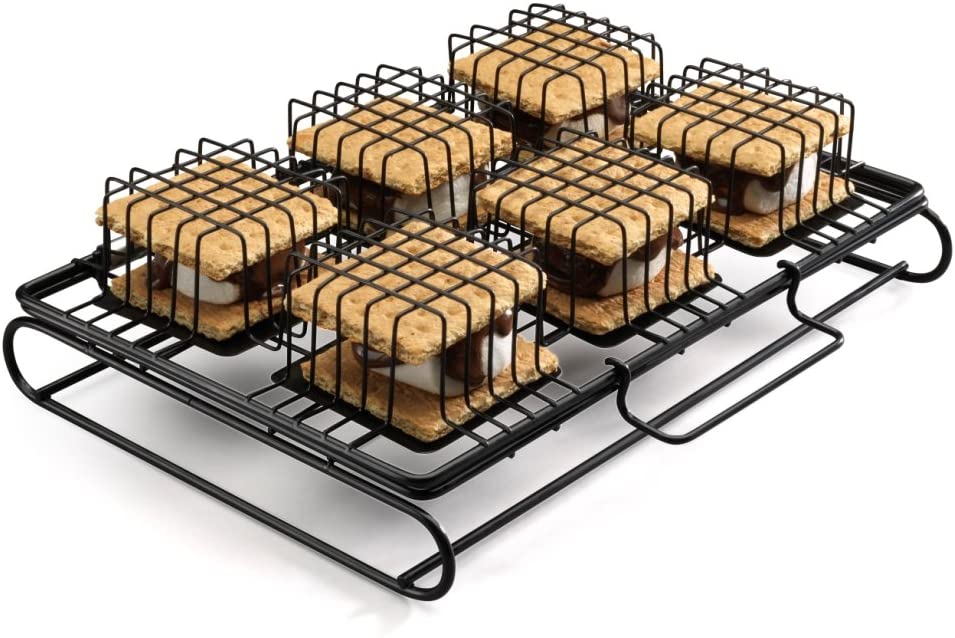 If you’re able to get outside and make a campfire (you lucky dog, you) then the only thing you’re going to need is a great set of forks or wooden skewers. The Ajmyonsp Marshmallow Roasting Sticks are more than serviceable to safely toast marshmallows.

The stainless steel forks use wooden handles to make sure you don’t burn your fingers and they telescope up to 32 inches to ensure your hands never get too close to the flame.

We think the pack of eight forks is the right amount, so you have plenty to go around if needed without having to wash the same two forks again and again. The forks are also color-coded so you don’t confuse your fork with your buddy’s.

And hey, at the end of the day, whether you use them for s’mores or not, they’re fireproof forks that can be used to cook just about any food over an open fire, so you’ll definitely get your money’s worth in the long run. 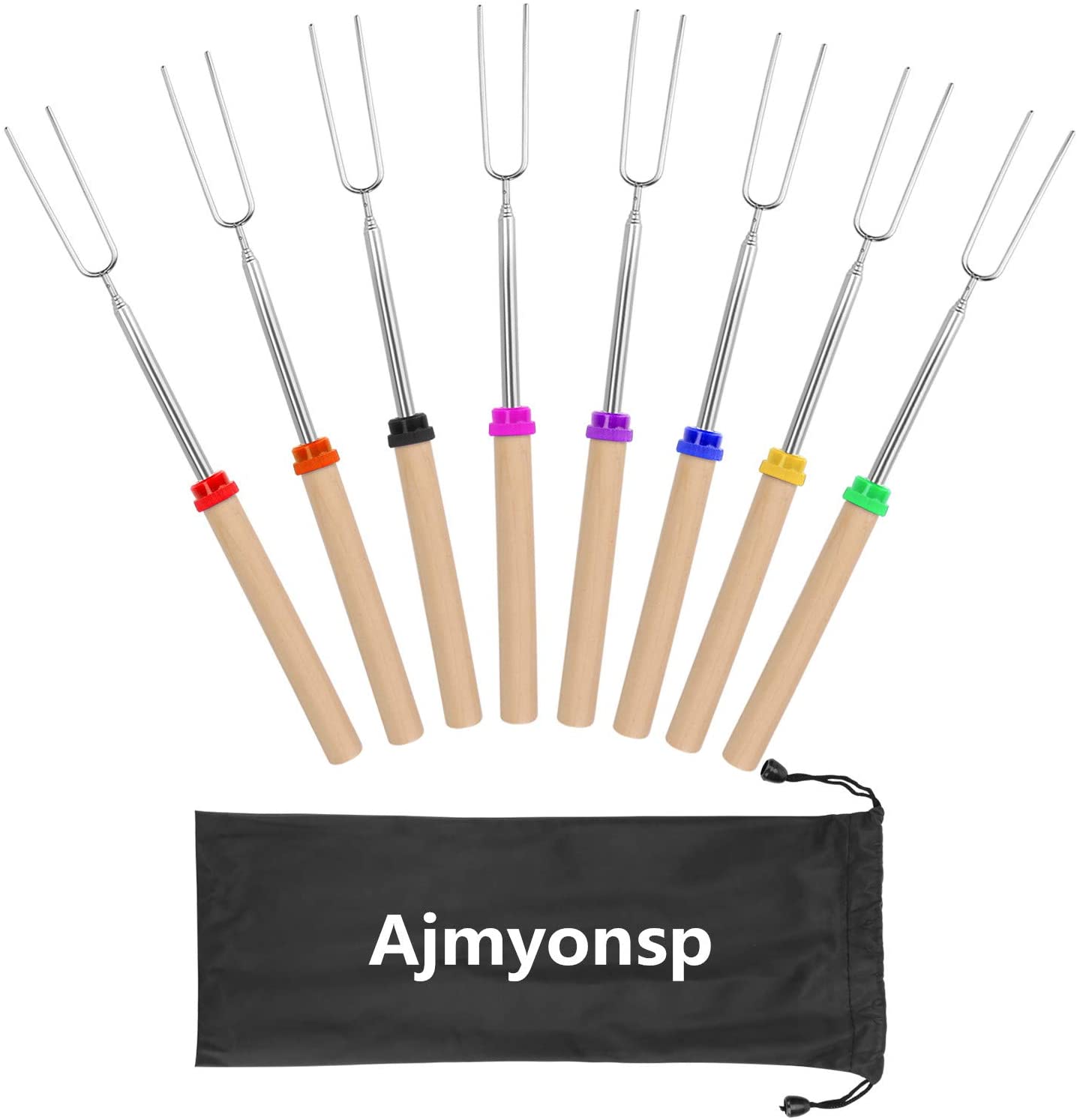 Camps would never have enough forks to go around for s’mores night, which is why we’re willing to bet you mostly used wooden sticks for s’mores making growing up. Not only can you get a ton of them on the cheap but they’re biodegradable so you can chuck them in the woods when you’re finished instead of trying to hand-scrub burnt marshmallow off metal forks.

The Jungle Stix Marshmallow S’mores Roasting Sticks are thick, 36 inches long and come in a pack of 110. With that many sticks, you’ll be set for s’mores for years. 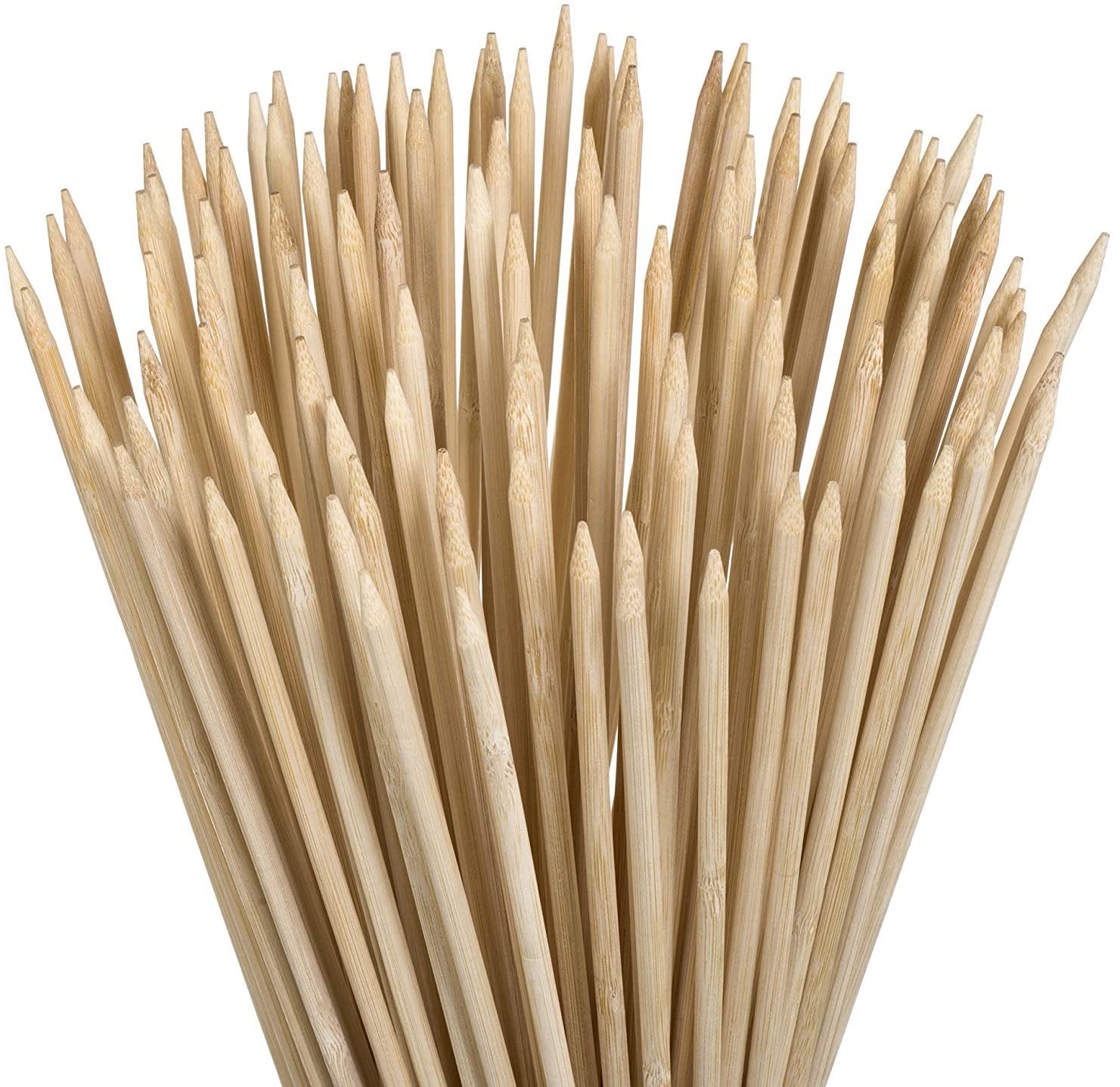 These cans will burn for six hours and you can always put the top back on to kill the fire and save the fuel for another time. If you’re picking up one of the best s’mores kits, make sure to pick up some of the best fuel too if the kit doesn’t come with it. 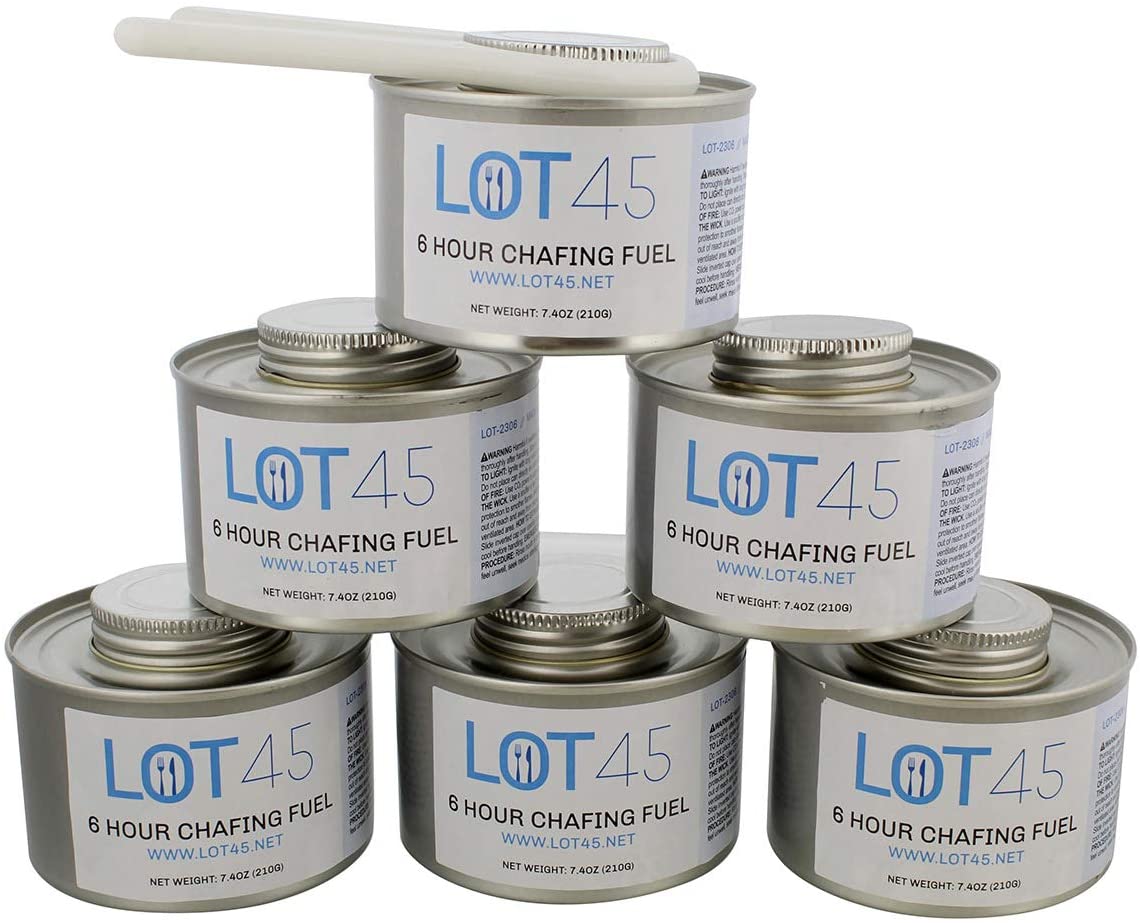 The Best Milkshake Makers to Satisfy That Sweet Tooth of Yours