Is it starting to feel like your favorite vodka and whiskey cocktails are going stale? Or is vodka too bland while whiskey is too strong for you? Consider turning your palette towards spiced rum. Spiced rum is a fun and delicious spirit that is often overlooked, probably because it is associated with island mix drinks, and vacation settings. But we could all use a vacation right about now, and spiced rum can liven up your liquor cabinet that has suddenly gone stale.

Spiced rum is a much sweeter liquor than the likes of vodka and whiskey. Rum is made by fermenting sugarcane/molasses and then aging the resulting liquor in oak barrels. But much like gin, the real magic happens when all of the spices, fruit and other tasting notes are added or steeped into the rum. This is essentially what adds the “spice” to the rum.

The main tasting notes in spiced rum are vanilla, cinnamon and fruit. Of course, depending on the brand, some are sweeter than others, while some are boozier (see Sailor Jerrys or Captain Morgan 100 Proof). Because of their sweeter profiles, they make for a great base in a festive cocktail. If you’ve never had a perfectly made Mai Tai or Mojito on a summer day, you’re doing it all wrong.

It’s time to try something new, broaden those horizons and add a little more flavor to your liquor cabinet. Below you’ll find our recommendations for the best spiced rum for sipping and cocktails.

Any spiced rum list would not be complete without The Captain. Captain Morgan is known for its smooth and sweet taste. It leans harder on vanilla and butterscotch flavors compared to most other spiced rums. That’s why it mixes so well with Coke-a-Cola (think rum and Coke). If you like your spiced rum on the sweeter side, give The Captain a try.

Don’t let the dark coloration or label of this delicious liquid fool you into thinking it’s a harsh spiced rum. On the contrary, it’s mild and sweet with vanilla and dried fruit flavorings. Its blend of fruity tones makes it great for tropical party cocktails like Mia Tais, California Surfers or a Jungle Birds.

This Barbados spiced rum will get your tastebuds dancing with cinnamon, nutmeg and butterscotch tasting notes. It’s a little more subtle than other “spicy” rums, so there isn’t as much seasoning “burn” making it ideal for Mojitos or for mellowing out the acidity in a pineapple rum cocktail.

Even though Bacardi is arguably one of the most recognizable brands in the rum world, it also delivers one of the most unique tasting experiences. Smokey flavors are usually reserved for barrel-aged scotch or mezcal, but there’s a little smokiness in the finish here with Bacardi. It blends nicely with the caramelly vanilla flavoring along with dried fruit notes. It’s a great mixer for Rum Mules, Rum and Cokes, and ginger beers.

If you enjoy your cocktails with a little more kick (AKA more booze), Sailor Jerry is a great rum for the base layer of your drink. It’s a boozy 92 proof, but the strong vanilla and cinnamon flavorings mellow out the harshness substantially. This one is a little more spicy than sweet and goes great with sodas and Mojitos.

If you thought the distilling process of gin was complex, Chairman’s Reserve Spiced Rum gives it a run for its money. It’s distilled like gin, and aged like bourbon, and soaked in fruits and spices. It’s quite an intense process, but the finished product is an award-winning spiced rum that’s delicious both neat or in the cocktail of your choice. 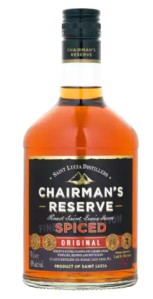 Don Q is relatively new to the spice rum world, but the new kid on the block brings big flavors to the game. This one is pretty boozy (45 percent alcohol by volume) and really sweet with heavy vanilla flavorings, but the oak barrel taste gives it a great finish. If this one is a little too sweet for you neat, put it in a pineapple rum cocktail to balance out the sweetness with a little acidity.

When you think of Louisiana (especially New Orleans) you think of great food, parties and vibrant colors and flavors. This Louisiana-born rum matches that description perfectly. It’s sweet with locally produce sugarcane and Creole spices with mellow vanilla and cinnamon. It’s so delicious that we recommend trying this rum neat or in a glass with some ice before putting it in a cocktail. 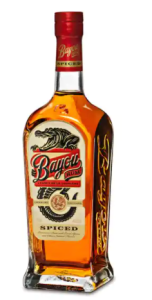 This Florida-based spiced rum is equal parts spicy and sweet. Burnt brown sugar and fruits provide the first wave of sweetness as a good dose of cinnamon and white pepper give the spiced rum a little bite. At 35% ABV, it’s not overly boozy, and its unique mix of sweet and spice make it a great candidate for just about any rum cocktail.

When you love The Captain, but also wouldn’t mind cranking up the alcohol content, Captain Morgan 100 Proof Spiced Rum is probably more your speed. It’s the more boozy version of this classic Rum and Coke titan. It’s time to show who’s really the captain of the party brigade.