Many home cooks will say that there are certain Thanksgiving side dishes that there’s never enough no matter how much they make. One might be the mashed potatoes or the side of mac and cheese. Another would be the gravy, of course. But high up there on the list as well for many of us would be the stuffing. If we’re being honest, we like the stuffing more than I like the turkey.

Of course, there’s a lot of ways to enjoy your stuffing. Some families may do a bread-based, while others go for sausage. Some may make sage or another herb the central ingredient of their stuffing. No matter how you prefer to enjoy your holiday stuffing, it’s probably a fair amount of work and somewhat time-consuming, unless you decide to use good ole’ stuffing from a box.

While that may feel like a cheat, it is, in fact, a good plan, and there are some surprisingly delicious options out there that won’t feel like cutting corners at all. You may even end up discovering you like it even more than the homemade version that takes hours out of your holiday.

Thanksgiving is all about spending time with those you love. Save some time this year and spend less of it cooking in the kitchen and more time with your guests enjoying the food.

This vegetarian stuffing can be a side dish option for guests who don’t eat meat — assuming you keep it outside the bird. It’s a simple traditional recipe that can be enjoyed as is, or make it your own by adding some onions, celery or a favorite spice blend. The stuffing mix will give just the right texture and flavor to your family’s stuffing recipe without all the accompanying fuss. 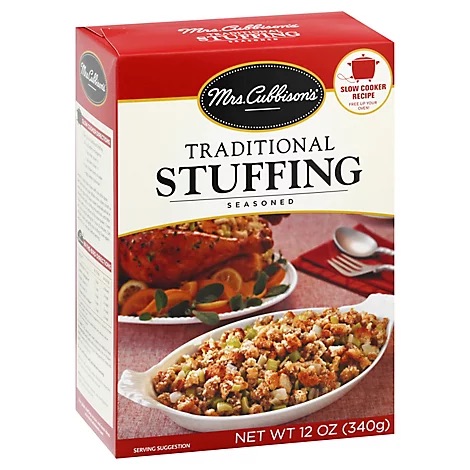 This classic herb-based stuffing is so good; it might just become a family favorite side dish even when it’s not the holidays. A simple mix of white and wheat bread with herbs and spices comes with an easy prep guide right on the bag. It contains only vegetarian ingredients (though the prep recommends adding chicken broth, you can easily substitute for vegetable broth), so it’s safe for plant-based guests as well. 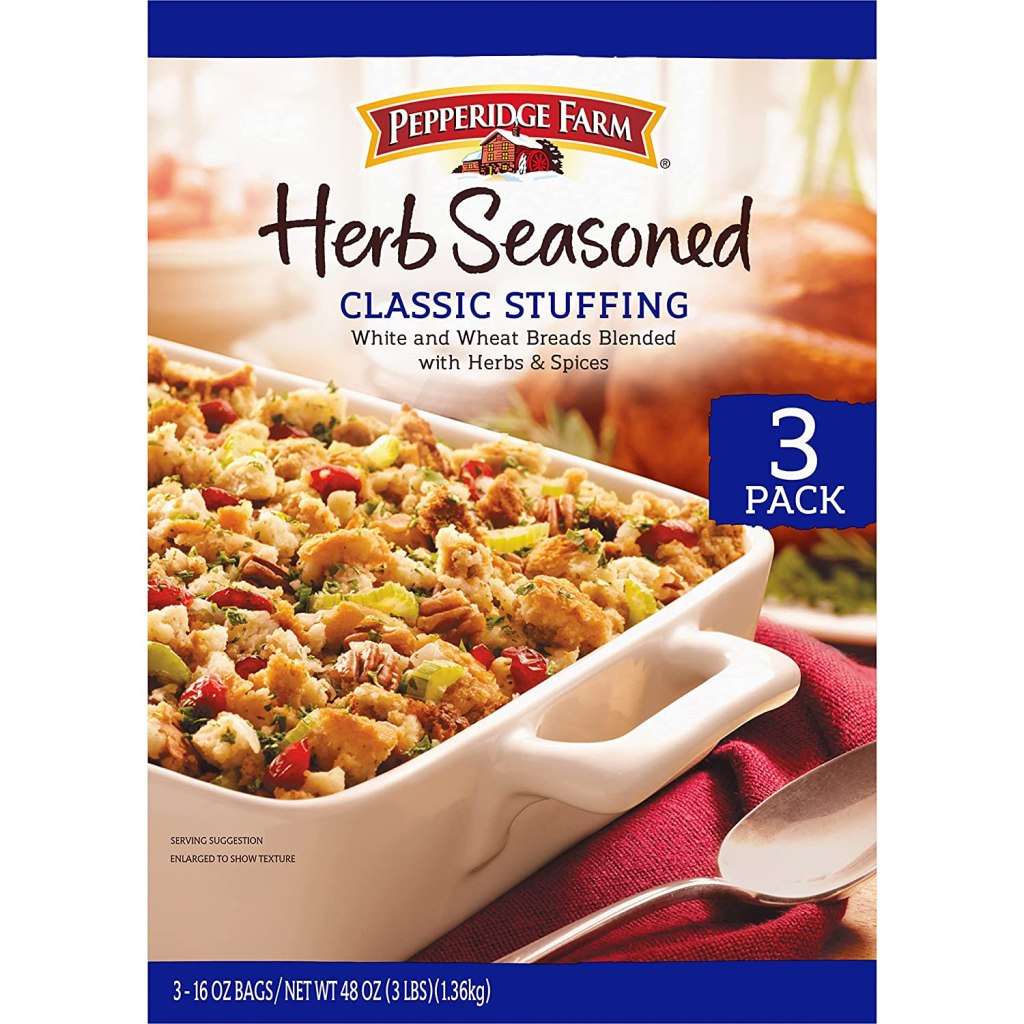 Those of us craving stuffing every season probably aren’t doing so because we crave the herbs and vegetables mixed in. We want it to be a starchy, carby, saucy mess. It should be salty and buttery, and that’s precisely what you’ll get in this easy-to-prepare Stove Top mix. 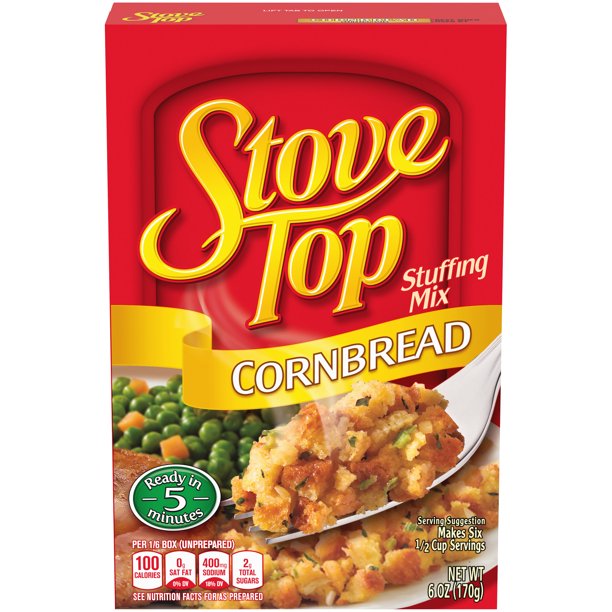 OK, so maybe some of you are trying to keep things healthy even when eating stuffing. It’s not surprising you’d find that option at Whole Foods with a vegan-friendly stuffing mix that incorporates whole grains. It’s easy to make and can easily be made more seasoned by adding veggies or fresh herbs to the mix. 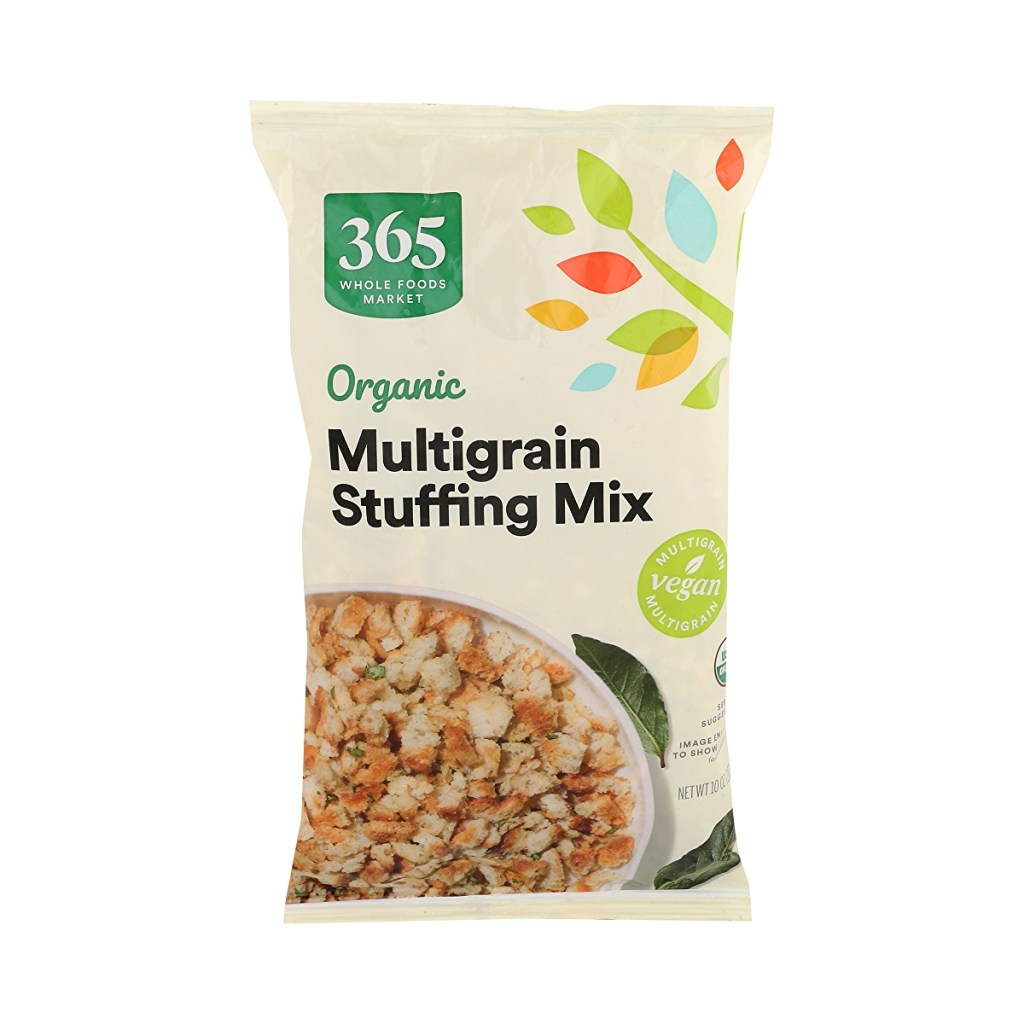 This cauliflower-based stuffing is a solid option for those avoiding excessive carbs (at Thanksgiving dinner? Really?). It’s low-carb and gluten-free and has almost half the calories of many traditional wheat-based stuffings. While this may be a kind of jarring switch for traditional stuffing lovers, they’ll be surprised at how tasty and satisfying it actually is. 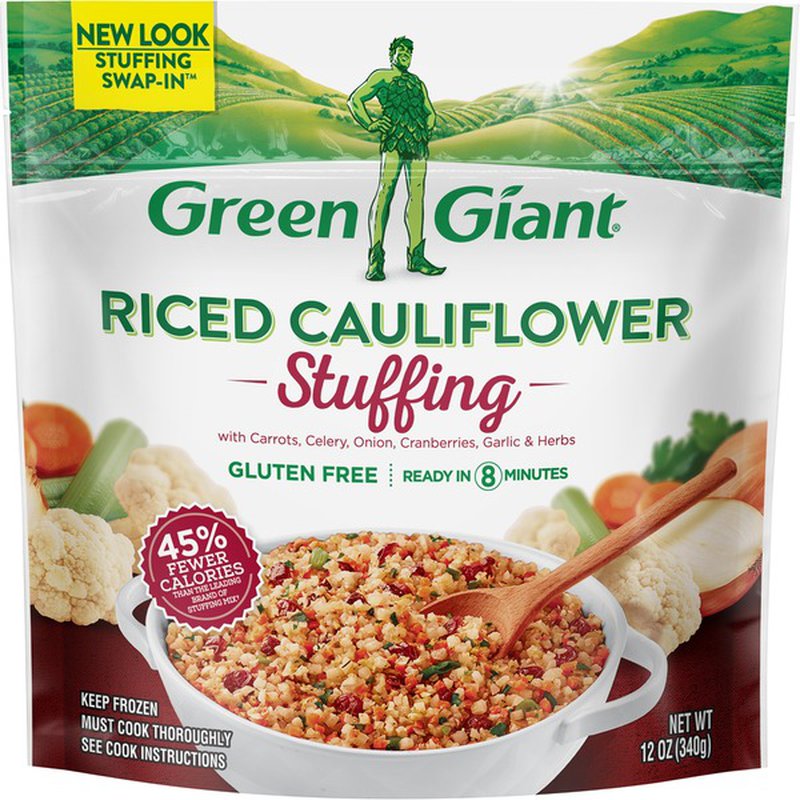 BEST WITH A HINT OF SWEET

The difference between bread-based and potato-based stuffings will be seen in the texture first and foremost. This stuffing is thankfully not dry, as sometimes we fear with grain-based stuffings, but is also not all that dense — and is instead reminiscent of the potato rolls we love. They are squishy and have a touch of sweetness. We generally consider stuffing a more savory dish — not sweet — but this delicious rendition from Martin’s works! 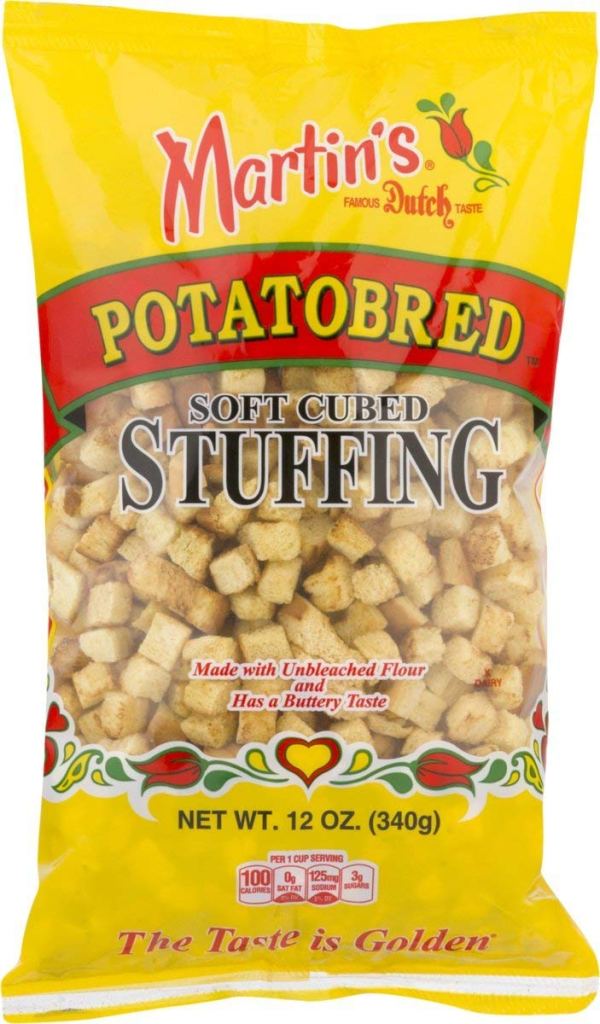 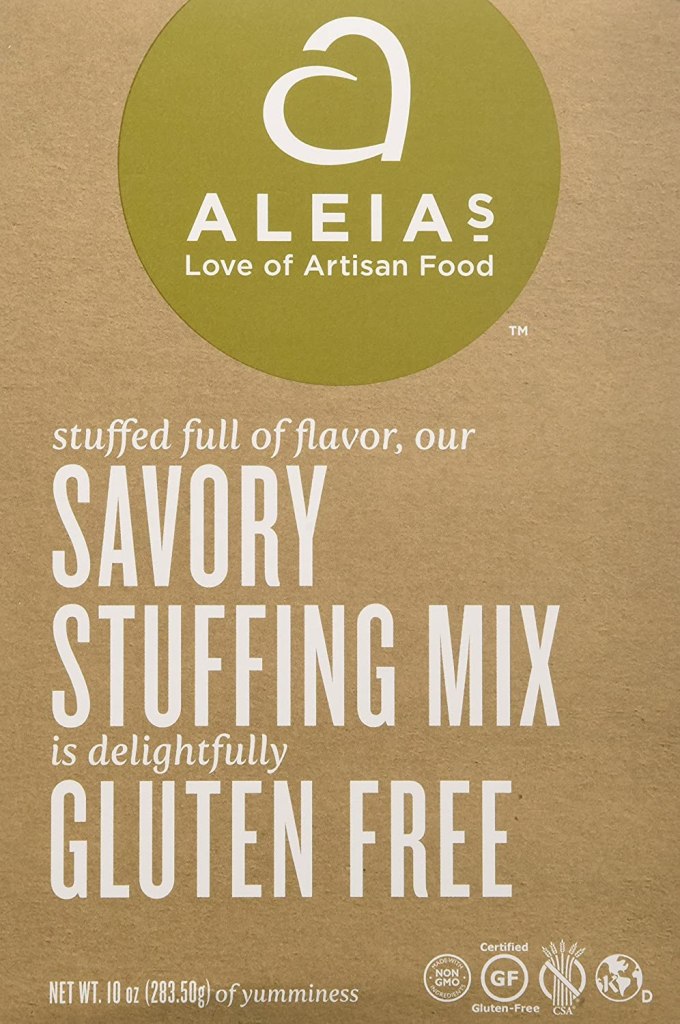 This option from William Sonoma is a little fancy but a lot delicious. It has an almost crunchy crouton element, and the process of preparing the mix is slightly more involved than a lot of the other mixes, but the ultimate payoff is well worth it. The bread blends with all the flavors associated with that epic turkey dinner, including thyme, rosemary, fennel and basil, making it an aromatic addition that pairs perfectly with rich gravy. 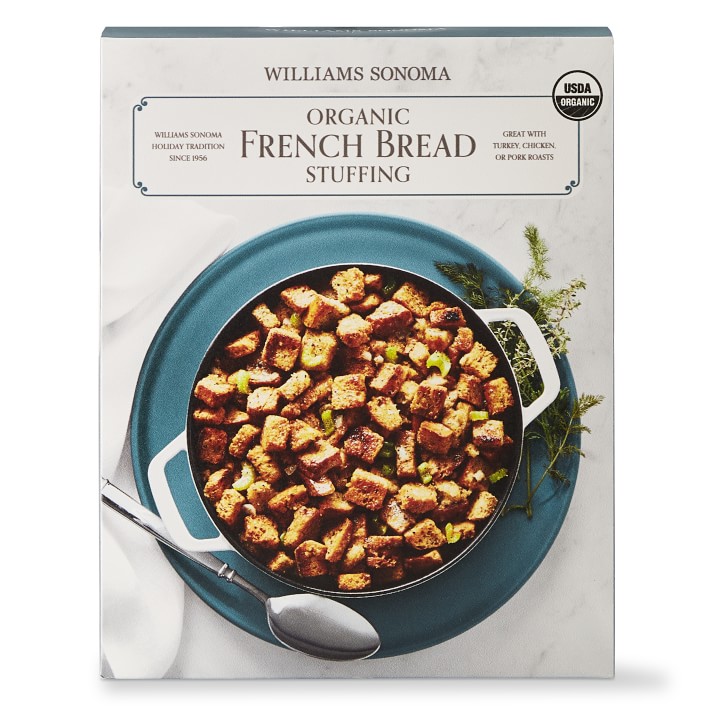 This stuffing mix is light and fluffy, blending organic herbs like sage, thyme and rosemary. It’s easy to prepare — add some broth and olive oil — and it can be vegetarian or vegan if you skip the chicken broth and use veggie broth instead. Spruce it up even more with additional vegetables if you want, or add in some sausage to give it an even more robust flavor. 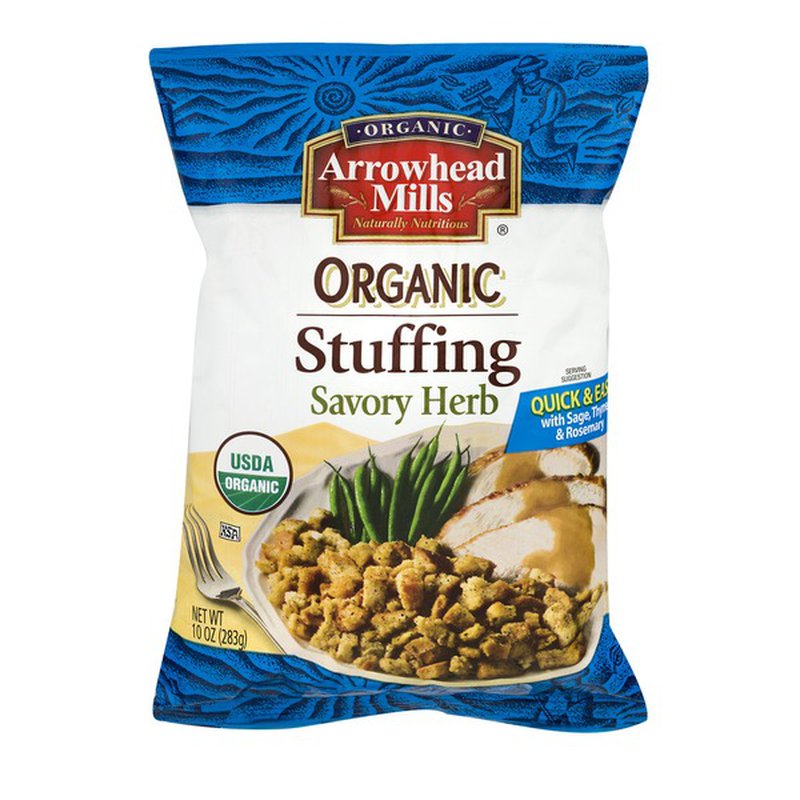 This delicious stuffing is as easy as it gets. It arrives in an oven-safe tray, which means all you need to do is heat it up and serve. This is no simple stuffing; it includes fennel, walnuts, Granny Smith apples, and crumbled Italian pork sausage, making for an incredibly savory, flavorful blend. This is a stuffing you can totally take credit for and pretend you created yourself. 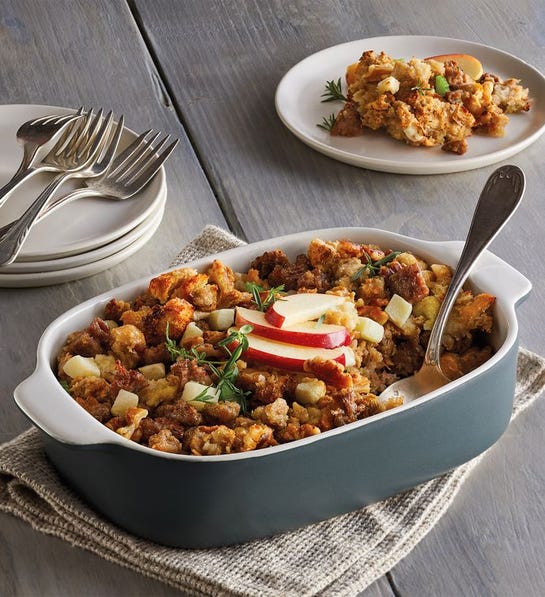 These Thanksgiving Meal Kits Take the Hassle Out of the Holiday