Vodka is the most popular spirit in the world. But like everything uber-popular, it has a mixed reputation. While some of us associate vodka with the classy martinis sipped by James Bond, others remember vodka as the go-to for shots at their college frat.

Because vodka is usually flavorless it’s one of the most versatile spirits. Vodka goes down as a shot much easier than other liquors, but that’s not to say you can’t sip. Some of the best vodka brands are worthy of a glass on the rocks.

Vodka also yields a plethora of respected cocktails. You’ve probably tasted the famous ones — bloody marys, cosmopolitans, screwdrivers, Moscow mules, and so on — but craft cocktail experts and adventurous DIY bartenders have been using vodka for all kinds of exciting new drinks.

But what is vodka, really, and where does it come from? Find out the answers (plus a list of the 11 best vodka brands) below!

Where Did Vodka Come From?

Nowadays vodka is synonymous with Russia, but the liquor’s origin isn’t necessarily Russian. Indeed, the debate rages on between Russia and Poland as the true country of origin. All we know for sure is that vodka became what it is today around the 15th or early 16th century. As with most liquors, vodka was first used as a medicine. Polish physician Stefan Falimierz said in his book, On Herbs and Their Potency (1534), that vodka was used “to increase fertility and awaken lust” — words we still (partially) believe in.

Skip forward a few hundred years to the 1950s and vodka starts to explode around the U.S. As Americans started getting a taste for Moscow mules, bloody marys and vodka martinis
(and James Bond hit the screen with his martini in hand), vodka gained a reputation as a suave and exotic liquor. In the ‘90s, craft cocktails cemented vodka’s popularity. The rest is history.

Most vodka is produced from grains including sorghum, corn, rye or wheat (rye and wheat being more high-quality), but some vodka is also made using potatoes, sugar, soybeans and other plant matter. These ingredients are first fermented (like wine), bringing the alcohol content up to around 16%, and then distilled to create real liquid courage with about 40% alcohol content. Vodka is even sometimes flavored with fruits, other herbs or even spiked with other liquors.

As any fitness geek or dieter knows, vodka has the special quality of being one of the best low calorie liquors. Vodka averages about 97 calories per shot, compared to around 150 calories in regular beer and around 130 in a glass of wine. Plus, vodka’s nearly tasteless flavor profile means you can mix it with equally light refreshments, such as sparkling water, to keep calorie intake down while at the bar.

From cheap Russian classics like Smirnoff to premium French vodkas such as Grey Goose, there’s a lot to choose from when shopping for vodka. And when it comes to the minimal, clean taste of great vodka, there’s more differentiation between brands than you might think. Before fixing your next martini, taking a shot or sipping some Russian ice, read our best vodka brands.

Belvedere can do it all — and it can do it all well. The Polish vodka is slightly on the premium side, but we think it’s completely worth the few extra bucks. You can enjoy Belvedere on the rocks, in a killer martini or lemon drop or as smooth a shot. The recipe is beautifully minimal with only premium Dankowskie rye, water and Polish passion. The vodka is quadruple-distilled without any additives, creating that signature clean taste that makes it one of the best vodka brands available. The bottle also looks chic on any bar cart or counter, showing an illustration of Belweder, the Polish presidential palace in Warsaw.

Yes, shots might only last a second or two, but it’s still worthwhile to buy the right vodka for the job. Russian Standard is our suggestion for effectively getting any party started or ramping things up. The famous Russian vodka can be found in most liquor stores, and it’s actually nicer than most budget options. This slight bump in quality is what makes it perfect for enjoyable shots (i.e. no gagging), and it can even be used in cocktails for those guests who pretend to be above taking shots. Crafted in vodka’s motherland (one of them, at least) using wheat, Russian Standard is quadruple-distilled and filtered through charcoal for a smooth finish.

Another vodka that’s great on its own is Reyka. Reyka is one of a few vodkas from Iceland and by far the best vodka brand from there. The mid-level vodka is made from Arctic spring water and filtered with lava rocks — just as one might expect from an Icelandic alcohol. The company was founded in 2005, making it relatively young for liquor brands. Reyka also boasts a zero-emission distillery, meaning you can sip, shoot or mix it without stressing the environmental impacts.

If you need some booze on a budget, go for Smirnoff. It’s made right here in the U.S., triple-distilled and filtered 10 times for a flavor that’s better than the other affordable guys. You probably know the taste, but the famous brand has a fascinating history that most people aren’t familiar with. It was created in 1864 by Pyotr Smirnov, a Russian peasant, who used some ingenious marketing to build his brand and become one of the richest men in Russia. The Bolshevik revolution drove the brand out of Russia, forcing Smirnoff to spread around the globe.

When you think of vodka you think of Russia, and this is one of the best vodka brands from the area. Russian Standard Gold is a mid-level vodka that’s an upgraded version of Russian Standard’s famous vodka. It’s infused with a hint of Siberian ginseng into the wheat vodka. It’s not flavored, but has subtle hints of caramel and vanilla for a unique experience that’s still authentic. This subtle flavor makes the vodka ideal for sipping neat or on the rocks, but it can still inject some character in a vodka cocktail.

Martinis do an excellent job of bringing alcohol to center stage of a cocktail and letting it shine. This means the alcohol needs some serious talent, or the whole martini will fall flat. We like this Elyx vodka from Absolut because it’s simply an upgraded version of Absolut’s best-selling liquor — nothing too fancy, but high enough quality to impress any mixologist. It’s one of the best vodka brands for martinis. Elyx comes out of Sweden, uses grain sourced from a single estate, and gets distilled in vintage copper stills for smoothness.

7. Ketel One Botanical Grapefruit and Rose

Because vodka is essentially flavorless, it’s fun to experiment with flavored alternatives. Ketel One’s Botanical vodkas are some of the best in this category because they’re lightly flavored without sugar or artificial ingredients and have a low alcohol content (30%) for easy sipping. This low alcohol and slight flavor makes them great for pairing with appetizers or mixing with club soda for a light and refreshing cocktail. The Botanical vodkas come in three flavors — Cucumber & Mint, Peach & Orange Blossom, and Grapefruit & Rose — but the Grapefruit & Rose (below) is our favorite.

Courtesy of Amazon
Buy: Ketel One Botanical Grapefruit and Rose $19.99
Buy It

Tito’s is another bottle of vodka that can do it all. It’s arguably America’s most versatile vodka, coming out of Austin, Texas, and boasting a classic taste that works in any form. Tito’s uses a rare micro-distillation process with an old-school pot still like cognac or single malt scotch. The flavor is crisp and clean, making it refreshing in a cocktail and smooth on the rocks. It’s one the best vodka brands due to its versatility, familiar flavor and trusted brand.

When it comes to alcohol, every detail matters — from seed to the glass you drink from. That’s why vodka lovers have been applauding Prairie’s use of organic, non-GMO corn in their vodka. After the organic corn is harvested, it’s distilled over three years for a premium taste. The vodka has slight hints fruitiness — making it perfect for sweet cocktails like cosmopolitans or screwdrivers — and a low price tag for the budget shoppers.

We all want our home bars to look their best. If you really want to wow your guests, pick up this bottle of Crystal Head. The name says it all; the bottle is label-free, shaped like a skull and made of fancy crystal. But inside the eye-catching head you’ll find some vodka that’s just as good as its packaging. The brand was created in 2007 by Hollywood renaissance man Dan Aykroyd and has since gained impressive traction in the vodka business. The conversation-starting crystal skull and premium taste make this one of the best bottles of vodka for gifting. 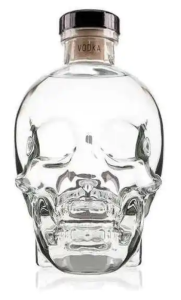 Stoli (short for Stolichnaya) was a Soviet vodka, but it gained so much popularity that the business continued after the dissolution of the Soviet Union. You’ve probably seen or sipped their regular best-selling bottle, but this Elit is special. It upgrades normal Stoli with pure winter wheat and a freeze filtering process that produces an incredibly smooth taste. As Vodka Buzz reviewer Robert Brodrecht puts it, Soli Elit, “takes all the good characteristics of Stoli and refines away all the bad.” Although you can certainly mix Elit, we don’t recommend it. Instead, enjoy this stuff straight, on the rocks or in a very dry martini.

This vodka brand founded by Kate Hudson is relatively new but already receiving rave reviews, making it one of the best vodka brands founded by a celebrity. Upon realizing that no other vodka brands were quite to her liking, and none of them were founded by women, so she decided to create her own. King St. vodka is made with alkaline water which gives it a smooth, round mouthfeel and a delightful finish. It’s also distilled seven times and made using entirely non-GMO corn making it as clean, pure and healthy as possible. It’s also completely gluten-free. 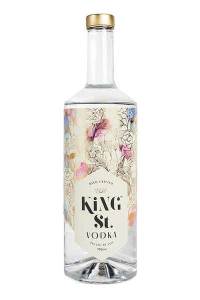 This vodka brand comes from Japan’s most famous whiskey manufacturers who make it clean, crisp and one of the best vodka brands available. It’s got a mix of green mint, citrus and sweet pea flavors with just a hint of white pepper on the tongue for the finish. It’s zesty, sweet and spicy. This vodka is made to be enjoyed on its own without any mixers. Keep it in the freezer and pour it straight into a glass whenever you’re ready to enjoy.