You can expect consistency when you walk into a Blue Bottle, which has shops across California, New York, Boston and Chicago. White walls, light wood and an unyielding commitment to pour-over coffee are hallmarks of the Blue Bottle experience, as well as a love of light roast that goes beyond even most other specialty roasters. But Blue Bottle is also willing to push the envelope and explore the outer reaches of what coffee can be, which is what they did with the Colombia Mauricio Shattah Wush Wush, part of Blue Bottle’s “exceedingly rare” series of coffees. The coffee retails at $75 for a single 100g tin (for context, a regular coffee bag is 12oz., or 340g. A full bag’s worth would theoretically cost $255).

I had a chance to taste test Blue Bottle’s Exceedingly Rare coffee at Blue Bottle’s Downtown L.A. location. I talked to Shaun Puklavetz, Blue Bottle’s Coffee Sourcing and Relationship Manager, to find out what makes the XR coffee special. 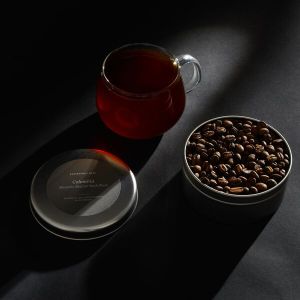 If you’re used to coffees called “French Roast,” the name “Colombia Mauricio Shattah Wush Wush” might be a lot to unpack. The first part of the equation refers to Colombia; this coffee is grown in Tolima, Colombia, a region of the country that’s prized for exceptional coffee.

Mauricio Shattah is a doctor-turned-coffee grower who takes a meticulous approach to growing and processing coffee. Puklavetz explained, “I sent him an email just to share my admiration and let him know we’d love to talk about working with him. He called me about 10 minutes later, and we had a long conversation about his farm, ways we may be able to work together and coffee, in general. He shared several samples with us, and we selected a naturally processed bourbon, which was released as part of our Exceedingly Rare program last year. This year, we went into the harvest season with the plan to purchase this Wush Wush.”

Wush Wush coffee is a type of arabica that originated in southwestern Ethiopia and is now found in Colombia. Puklavetz says it’s “known for being floral, fruit-forward, and tea-like.” A lot of steps have to happen before the little red fruits that grow on coffee plants can be turned into the hot beverage that you knock back while scrolling through Twitter. And growers like Shattah and experts like Puklavetz all occupy space along the steps on the ladder. After the coffee cherry is harvested, it’s processed, and Puklavetz says the processing is what gives Shattah’s Wush Wush coffee its unique characteristics.

This coffee is “black honey” processed. Puklavetz explained that honey processing “refers to a category of processes wherein coffee cherries are pulped (i.e., the seed is removed from the fruit) then dried with a certain amount of mucilage left on the seeds.”  He added, “The amount of mucilage left on the seed is referred to by color, with black meaning lots of mucilage is intact, and white meaning almost none. Black Honey-processing typically results in very fruit-forward, expressive coffees.”

Other coffees are black honey processed, but Shattah takes the extra step of fermenting the coffee twice in an oxygen-free environment, which “effectively exaggerates the impact of black honey processing,” according to Puklavetz.

So what does this coffee taste like, anyway? In a word, good. But it’s also different, and before you even smell it, let alone taste it, you’ll likely take note of its reddish color. The notes describe “Blackberry Jam, Pink Lemonade, and Rosewater.” The word “jammy” comes up often, and while it’s a bit of coffee nerd lingo, it’s also something the average drinker (like myself) can actually pick up on. It really does taste like jam, with a tartness and sweetness that reminds you that what you’re drinking started as a fruit.

It may be good branding, but it’s also true: This coffee is exceedingly rare. It’s limited to 850 units, and at the tasting, they explained that most of what was available in Los Angeles was in front of me: a handful of small tins arranged on the counter. If you want to try it yourself, you can get one 100g tin for $75 directly from Blue Bottle or two at a slight discount of $140. I asked Puklavetz for the best way to prepare this coffee. You guessed it: pour-over. 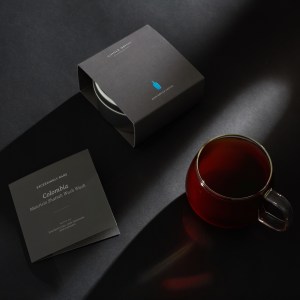 Buy Now
Love Cold Brew? Skip Your Local Cafe and Save Hundreds by Brewing at Home