Ordering a coffee used to be a simple thing — “coffee” was a drink, not a category. Of course, more choice is a good thing, but it can be confusing when you’re at the cafe’s counter scanning the menu and there’s a line forming behind you. Take iced coffee and cold brew, which at a glance might seem like the same thing. But if you’ve set foot in a Starbucks in the past five or so years, you’ll notice that cold brew and iced coffee are two different drinks, with two different prices. So, what’s the difference? And which, if either, is better?

The fundamental difference between iced coffee and cold brew is how each is brewed. Iced coffee is simply hot coffee that’s been chilled, whether that’s by popping it in the fridge right out of the Chemex or even “flash” brewing it directly over ice. Cold brew is made by brewing the ground coffee in “cold” water (it’s actually usually room temp). Since you’re not using hot water, it takes much longer to actually brew — as few as eight or as many as 18 hours. Unsurprisingly, brewing in cold water results in a very different flavor profile. Novelty and curiosity might have spurred the hype around cold brew, but it’s the distinct flavor that’s sustained cold brew’s success.

The Case for Cold Brew

One of the big problems with iced coffee is that it’s hard to know how fresh it is when you order it from a coffee shop. You could be drinking yesterday’s hot coffee, and getting charged more for it. Because cold brew takes longer to brew, the flavors are more slowly being extracted from the grounds over an extended period, rather than gradually going stale once it’s reached peak freshness. 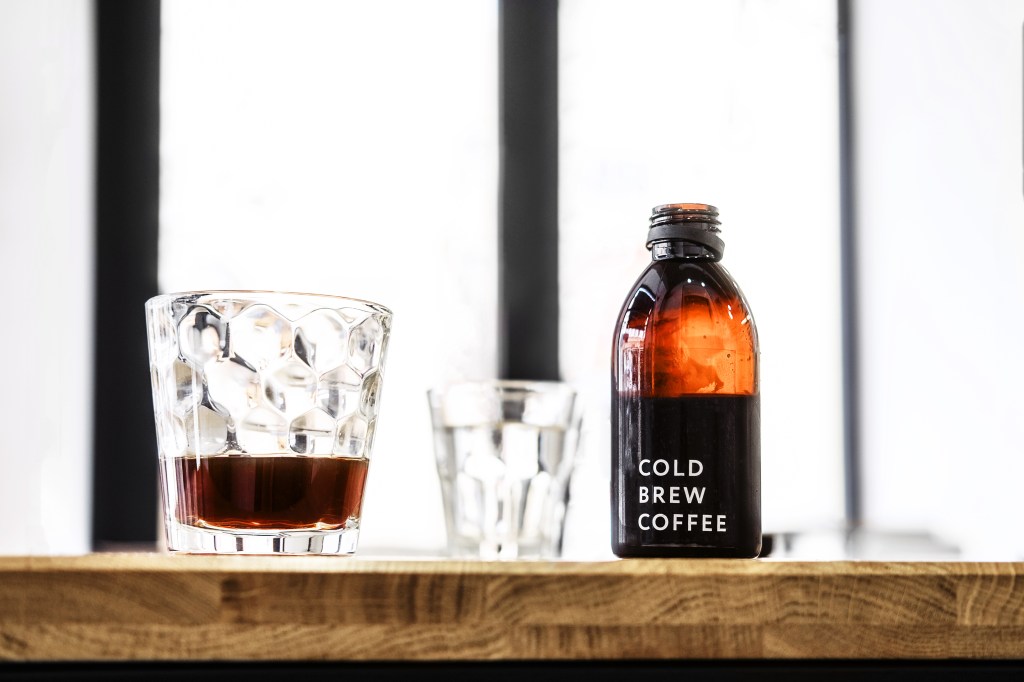 Cold brew is smooth and less bitter-tasting than other methods, and it’s slightly less acidic than hot brewed coffee. Cold brew’s flavor profile sets it apart from any other coffee drink, making the time-consuming process of brewing it worth it.

The Case for Iced Coffee

Despite cold brew’s ascendence, iced coffee still has ardent fans. The obvious benefit of making iced coffee is you need, at most, an hour’s foresight to go from craving iced coffee to sipping it — enough time to brew it hot and let it cool in the fridge. And if you’re getting it from a coffee shop, you’re probably dropping substantially less money on iced coffee than cold brew. 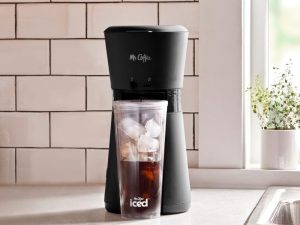 Proponents of iced coffee also point to the flavor. Cold water can’t extract all of the flavors of the coffee bean, meaning some of the nuanced flavors are lost. And cold brew may have fewer antioxidants that provide coffee’s health benefits. Iced coffee can be a better way to enjoy a coffee’s complex flavors.

How To Make Cold Brew

Despite requiring patience, cold brew isn’t exactly difficult to make. You can do it with your French press, or even just a mason jar. Another great option for cold brew enthusiasts is cold brew concentrate, which simply needs to be mixed with water or cream to your preferred ratio. That said, there is gear out there that can make cold brewing easier, quicker and less messy. These are some of our top cold brewing products that’ll ensure you never go without the good stuff.

With even the most basic kitchen gear, OXO finds a way to improve and innovate. That’s why it’s no surprise the brand has taken a unique approach to cold brew. It features a rainmaker top to more evenly cover the coffee grounds. An easy switch allows you to pour the coffee right into a carafe or cup once the coffee is ready. 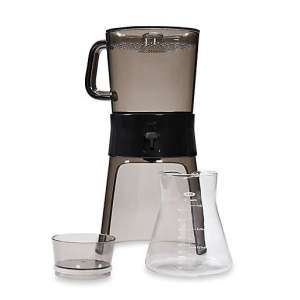 Image Courtesy of Bed Bath and Beyond

Takeya’s cold brew coffee maker is one of the most popular options on the market because it ticks a lot of boxes. It’s not too expensive, and it’s slender enough to fit in most fridge doors. Despite its space-saving stature, it’s not too small — it can hold a liter of coffee. Plus, it’s easy to use. The removable and reusable filter pops out of the coffee maker for easy filling with coarse-ground coffee. That said, the coffee produced can be weaker than some other options. 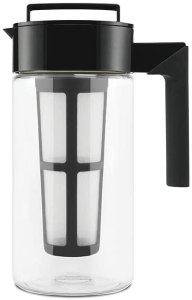 The French press is one of the easiest ways to make cold brew, and it’s a lot more versatile than other cold brew coffee makers. That’s because you can easily use a French press for purposes other than cold brew. Hot coffee is the most obvious application, but you can use it for frothing milk, brewing tea, and even making soup stock. For cold brew, simply add coarsely ground coffee, pour filtered water, and wait. When it’s ready, simply press the plunger and pour. The results can be somewhat gritty, but you can always filter it again using a paper filter. It’s slightly less convenient, but it doesn’t involve buying a single-use kitchen tool. 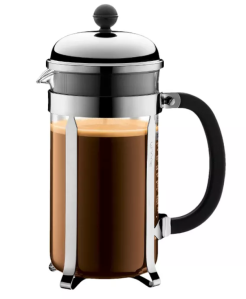 How To Make Iced Coffee

You can always just brew hot coffee and chill it, but if you want something even quicker, brewing over ice will get you results in as little time as it takes to make hot coffee. The trouble is that you have to get the ratios right — brewing your regular hot brew directly onto ice will lead to a watered-down drink, as the ice quickly melts and dilutes the coffee. These gadgets will allow you to make iced coffee quickly.

Ninja’s hot and iced coffee maker has a button for brewing directly over ice. Plus, you can customize your brew based on how much coffee you need, whether you want a whole pot, just one cup or you want to fill a travel thermos. The coffee maker uses a thermal carafe, rather than a glass carafe with a hot plate — this has the advantage of keeping your coffee hot without the burnt taste that comes from a hot plate. The included scoop attaches to the side of the coffee maker, so you never have to search for it. 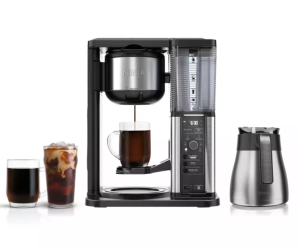 They may not be the most premium brand, but Mr. Coffee represents one of the best values when it comes to coffee makers. This innovative coffee maker includes a reusable tumbler that you can brew directly into. It’s designed to make a concentrated brew that goes directly on ice, making for a balanced cup of coffee. 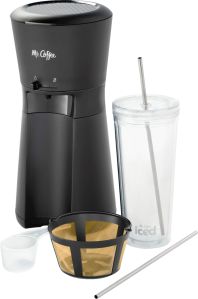 The great thing about manual brewing is that you never have to worry about mechanical parts failing. Plus, the Chemex looks way better than the average coffee maker. The Chemex lends itself well to flash brewing, which is the process of brewing hot coffee directly over ice. That’s because the large base can be easily filled with ice. If you’re worried about putting ice and hot water in the same glass, note that Chemex is made from tempered borosilicate glass, which is resistant to thermal shock. 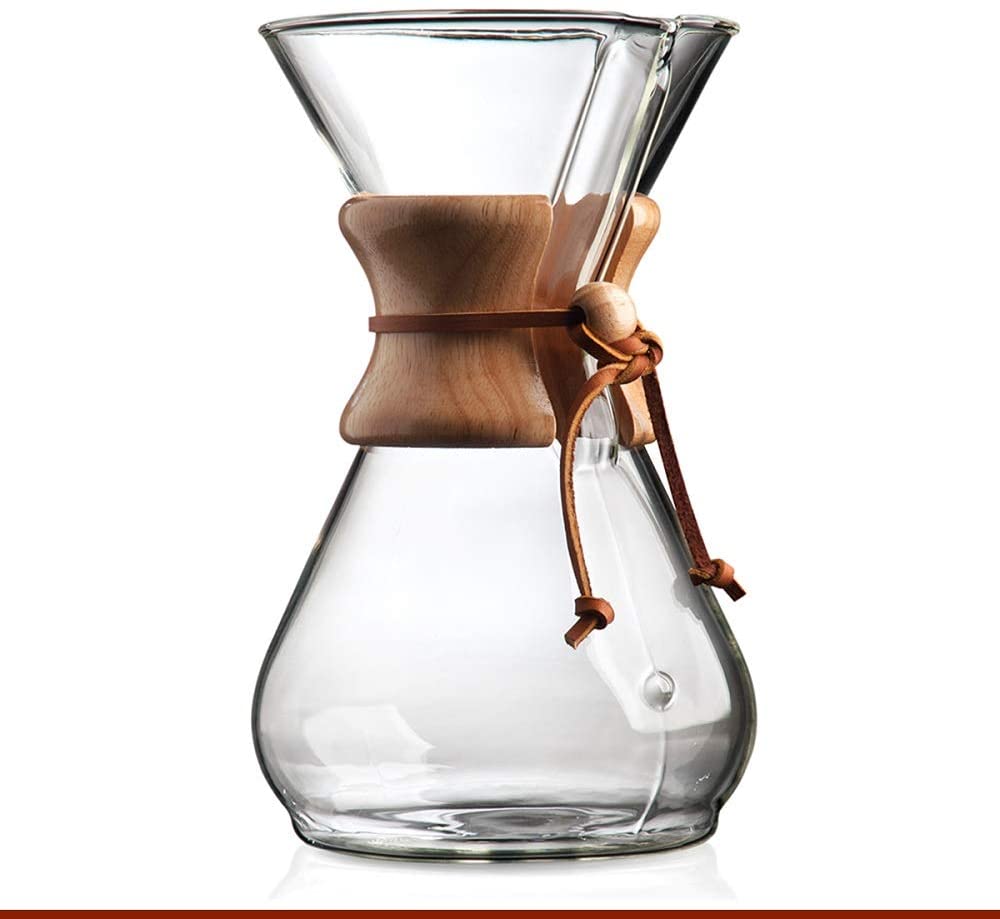