Ah, the Moscow Mule. Possibly the best vodka cocktail in the world. By mixing your favorite vodka, lime juice and ginger beer into the ever-so-recognizable copper Moscow Mule mug, this drink is one of the most popular mixed drinks and summer cocktails here in the United States.

The Moscow Mule has sort of a diluted history, meaning, nobody can really separate fact from fiction when it comes to the drink’s origin. It’s safe to say that the drink is an American creation, even if we can’t say for sure whether it was first mixed in Los Angeles or New York City

Per The New York Times, the most popular story goes something like this: back in 1941, the president of Heublin, then a major distributor of alcoholic beverages, was trying to get Americans to buy Smirnoff vodka. He teamed up with Los Angeles bar-owner and ginger beer maker Jack Morgan in hopes that they could mix their two unpopular beverages and create something super special. This is where it gets a bit confusing — though Morgan owned a bar in Los Angeles, there are also rumors that the first Moscow Mule was actually birthed by the two crafty bartenders somewhere in New York City. Therefore, nobody really knows exactly how the Moscow Mule came to be. All we know for sure is that afterward, the Moscow Mule blew up among folks in Hollywood and soon after the rest of the United States.

But what about the signature copper mug? How the hell did the famous copper Moscow Mule mug come into play? Well, it’s said that an unidentified woman was also in the mix of Morgan and Martin’s conversation. (She, too, was struggling to sell her own wares: copper mugs). It’s said that the men chose to use these mugs to help her out as well, and low and behold, the copper Moscow Mule mug became a staple of the American bar scene for both aesthetic and flavor.

When you pour a chilled drink into a copper mug, the vessel cools down, which makes the Moscow Mule an especially refreshing summer cocktail.

Now, you can order a Moscow Mule at just about any bar in the country. Bartenders have even created vodka-less mules by switching the recipe with their best whiskeys, top-notch bourbons and even tequila in some cases. It’s so popular because ginger beer has a similar bite to vodka but one that’s much more palatable for drinkers, making the drink go down smooth.

A Moscow Mule without the copper mug is kind of a no-no. If you’re ever trying to make your favorite mule in the comfort of your own home, you’re going to need a couple of the best Moscow Mule mugs on your bar cart. Lucky for you, copper Moscow Mule mugs are really easy to find online. If there’s a lady in your life that loves vodka drinks, they also make some of the best gifts for her.

Read on and find our top picks to snag before you get sipping.

A full set of Moscow Mule mugs will take you a long way, especially if you have friends over for drinks every once in a while. This set of four is the perfect gift set to add to any bar cart. It doesn’t only come with four copper mugs, but additional accessories such as copper cocktail straws, a stirring spoon, a cleaning brush, coasters and even a shot glass to ensure a stellar look on your bar cart even when the set isn’t in use. The makers are so sure of the set’s quality that it comes with a lifetime warranty and a 100% no-questions-asked refund guarantee. 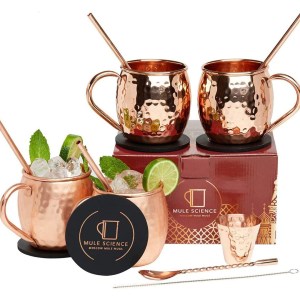 Not everybody needs four copper Moscow Mule mugs. Maybe you’re the type of person who has most of their cocktails solo in front of the TV or hanging out in the backyard. If that’s the case, this two-pack is perfect for your drinking habits. Both mugs are made from food-grade, corrosion-resistant stainless steel and copper materials for a lightweight hold and classic look. Both mugs come with a copper straw as well, so you won’t have to waste any plastic or paper straws of your own. 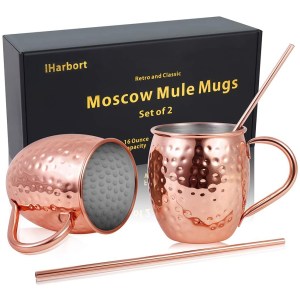 BEST FROM A VODKA BRAND

Although the Moscow Mule was partially invented by the creator of Smirnoff, we do have our preferences in 2021. Like, come on, we all know that Tito’s is our go-to vodka at the bar nowadays. These one-of-a-kind Tito’s copper Moscow Mule mugs are perfect for vodka connoisseurs and collectors alike. Simply pour it up in these mugs using Tito’s and you’ll be drinking the best mule you’ve ever made at home. 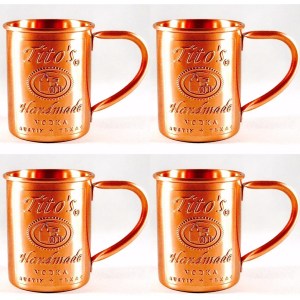 Made with 100% pure, solid-as-hell copper, these heavy-duty Moscow Mule mugs are the real deal. The color is unbeatable, the handles are tremendously durable and totally tarnish-resistant. These mugs are built to stand the test of time and will look the same today as they will in 50 years from now. Consider them a future family heirloom, your grandkids never have to know they’re from Amazon. With included wooden coasters and thick copper straws, these are pretty much a bang for your buck, too. 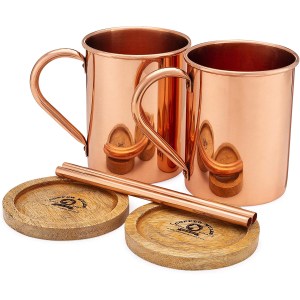 Alright, it’s technically not copper, but at least it looks copper. If you’re not familiar with YETI by now, we’re just about certain you’ve been living in the 90s or something because these babies are everywhere. Not only will you come correct looking like you’re drinking a Moscow Mule the correct way, but the double-insulated stainless steel interior promises your mule will stay freezing cold at all times. So, if you’re a lover of incredibly cool drinks, we suggest you ditch the copper mug for this look-alike. 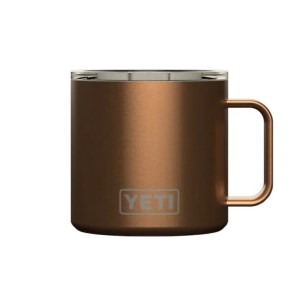 These timelessly good-looking black stainless steel mugs are perfect for anybody who doesn’t mind not drinking their mule from a copper mug. Yeah, we’re ditching the copper once again for these ones. Instead, these mirror-esque stainless steel Moscow Mule mugs are still perfect for holding your go-to mule recipe whether you’re using vodka like the rest of us or any other spirit. Alongside the set, you’ll get four stainless steel straws, a jigger and even a couple of fun toothpicks. 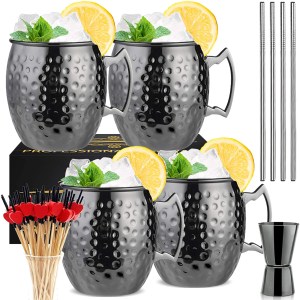 Don’t be fooled — although they’re black on the outside, these Moscow Mule mugs are completely copper on the inside. Yup, just like the OG 1941 mule glass, full copper is what you’re going to get with this two-pack, so you won’t lose any of that crave-worthy flavor copper adds to your drink. These are a stylish, trendy and handsome additive atop any bar cart. Ready for your first sip? 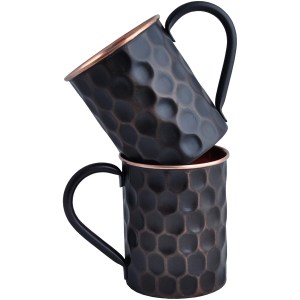 Though we might not be sharing drinks as regularly as we used to pre-COVID, this giant Moscow mule mug is a hilariously sized mug that all mule lovers need in their home — even if you’re just using it for decoration. This mug is made from 100% solid copper and will stay shiny for as long as you have it. It’s perfect for sharing with friends or even after a long stressful day. You know, when you need a bottle of vodka to yourself. 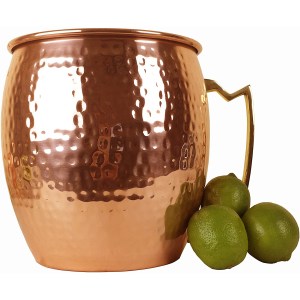