Dewar’s White Label is a very popular blended scotch that most whisky drinkers are familiar with. (Scotch whisky, like Japanese whisky, is spelled without the “e”, and so that’s how we’ll refer to all whisky in this piece for simplicity’s sake.) For those who might not be familiar, the term “blended scotch” means that the spirit is a blend of malt and grain whisky produced at various distilleries around Scotland, as opposed to a single malt, which is made from 100% malted barley whisky from just one distillery. Single malts might get more recognition and acclaim from whisky connoisseurs these days, but blends actually far surpass them in terms of sales. Dewar’s is definitely a major player in this field, and some other well-known brands include Johnnie Walker, Chivas, Grant’s, Ballantine’s and Famous Grouse.

Over the past few years, Dewar’s has been releasing some cask-finished whiskies at very affordable prices, each one providing a different spin on the familiar flavors of the core expressions. Previous releases have included whisky finished in mezcal and rum casks, but this current release offers what is arguably the most pronounced effect on the whisky’s flavor thus far by finishing it in ruby port casks from Portugal. This imparts this eight-year-old whisky with really bright notes of stone fruit, ripe cherry, candied orange and spice, adding an extra layer to the vanilla, citrus and cinnamon flavors already on the palate. Fans of sherry and port cask-finished whiskies from distilleries like The Macallan and The Dalmore will definitely enjoy this release. And if your past experience with blends has left you unimpressed or even disappointed with the flat, harsh flavors that can result from using cheaply made grain whisky, you’ll find that’s not the case here.

Dewar’s uses what it calls a “double aging” system to make its whisky. Simply put, this means that the malt and grain whiskies are aged separately, blended together, and then aged again for a period of time to allow them to marry together. In the case of the Cask Series, that blend is then put into a particular barrel type (port, in this case) for a final finishing period. Portuguese Smooth is definitely a blend worthy of sipping neat or over a couple of ice cubes, but it will also work in a variety of cocktails. Dewar’s recommends combining this new bottle with aromatic tonic (or regular tonic and a few dashes of bitters) to make a version of a classic highball. But this whisky would also work well in a Rob Roy, the scotch version of a Manhattan cocktail, with the big fruit and spice flavors of the palate playing off of the botanicals and inherent sweetness of the vermouth.

Look out for some more releases coming from Dewar’s in the coming months, which we’ll be sure to let you know about here. 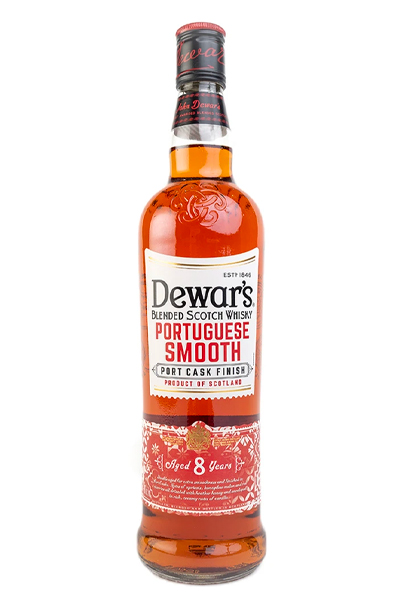