Move over whipped coffee, there’s a new opponent in town and it’s completely challenging the way we have our daily caffeine intake.

Golden Ratio is the newest java brand serving us a whole new category in coffee we never thought was possible: gold brew. Sounds sort of straightforward, right? Wrong. This cup of joe merges that classic coffee taste with the functionality, lightness and smoothness of tea. The beans are roasted at a lower temperate than your average coffee bean creating an alternative that’s five times less acidic with zero bitterness. Unbelievable, right?

Well, believe it. It’s real. I was given a couple bags of Golden Ratio’s chai and vanilla coconut flavors to whip up myself as SPY’s gold brew guinea pig. The overall goal was to brew both flavors hot and cold in order to make sure this stuff was worth buying.

Upon arrival, I have to admit I was a bit skeptical. I was assuming that the coffee grounds would arrive in a can of sorts, but they actually come dressed in seven individual large sachets per bag. So, they essentially all looked chunky tea pouches. This made me doubtful because I’m definitely more of a strong coffee type myself and I unintentionally correlate tea with weak, flavored water. A steamy, uncarbonated La Croix, if you will.

Nonetheless, to the tea kettle, I went.

While the water boiled, I set aside two mason jars filled to the brim with tap water and stuck a pouch in each. I placed these two in the fridge to have with breakfast the following morning because Golden Ratio suggests you let them brew cold overnight.

After the water in my kettle finally heated up, I added a pouch of the two flavors to separate mugs and waited for a few minutes for the flavor to evenly distribute throughout the cup. You know, classic tea stuff. 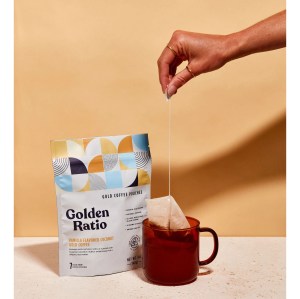 I tried the vanilla coconut flavor first and let me tell you, I was pleasantly surprised. It was, for whatever reason, reminiscent of sick days in the winter during elementary school, when mom would make a funky, hot drink and pamper you with toast and Scooby-Doo reruns. This was the funky hot drink. The taste really had more of a tea vibe than a coffee flavor, which didn’t really surprise me much given the packaging. It was more watery and it sipped like tea. Overall, it was flavorful but absolutely felt like a coffee-infused tea. 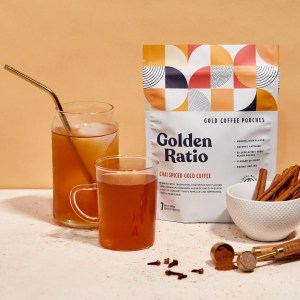 Chai, on the other hand, was perfect. I don’t love chai so much myself, so the coffee/tea blend really worked here for me. The coffee flavor was a little more masked by the chai which makes sense, considering chai itself is pretty overpowering. I even ended up adding a little bit of oat milk to play with the taste and that made me like it even more. If you’re 100% chai or die though, I don’t see this usurping the throne of your favorite chai drink. I would suggest the chai flavor for people who somewhat like the taste but don’t necessarily crave it regularly.

But How is Gold When Its Cold?

Now, it’s time to get real. The following day I tried some of the cold-brewed gold brew I prepared and I wasn’t entirely sold. Don’t get me wrong, I love me some cold brew coffee. I’m low-key obsessed. But as I was sipping, I couldn’t stop thinking about how much it reminded me of a weird iced tea. The consistency doesn’t make much sense in a cold setting. I tried adding oat milk to make it remind me more of coffee, but all it did was make it a milky iced tea. If you’re looking to transition into cold coffees from hot but don’t know how, I’m thinking maybe this could act as a nice transition. It’s definitely not meant to be slurped cold for iced coffee fiends like myself.

All in all, I enjoyed my Golden Ratio experience hot way more than I did cold. Additionally, I really wouldn’t necessarily consider this as much of a coffee drink as the brand portrays. Maybe because I love my coffee the same consistency as mud. I think this is a great start for people who want to get into drinking coffee but can’t handle the strong punch just yet. It’s perfectly light and delectably tasty when hot. Overall, I can already sense that this is going to be a staple to my mornings when the weather gets a bit cooler.

Want to try Golden Ratio yourself? Individual pouches of seven are sold for $14.99 on Golden Ratio’s website.