Well, it snowed here in New York City. The first snowstorm of the season, actually. While the majority of people spent the days before preparing by purchasing bread, milk, toilet paper and other household snowed-in essentials, I stocked up on my kind of snowed-in essentials. Yes, we’ve officially run out of toilet paper in my apartment and do not know what to do. But, we now have enough mulled wine to last us until, like, tomorrow at least. So that has to count for something, right?

Yep, I spent last night mulling wine. It’s something I’ve been wanting to do since September since I hadn’t gotten my yearly fix, but I’m a mess in the kitchen. If it can’t go in the air fryer, there’s a good chance I’m not making it. Like, having to put something on the stovetop? With fire? Sounds terrifying.

Nonetheless, I stormed out of my apartment yesterday afternoon before the snow began to fall and snagged every single ingredient I was going to need in hopes that tonight I would have delicious mulled wine and a still-standing apartment building.

If you want to learn how to make mulled wine the right way, I’ve got everything you need below.

I followed this recipe from Gimme Some Oven which called for the following: 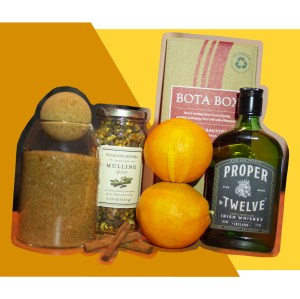 “Optional” was a cute word to use because I was obviously going to add some more from my bar cart whether the recipe called for it or not. Additionally, I had already purchased mulling spices from Williams-Sonoma around a month ago in anticipation of this day.

All I needed was some red wine and oranges because the rest of the products I happened to have already in my apartment. I chose Bota Box’s Cabernet Sauvignon because I’m a big boxed wine stan and I regularly purchase the brand’s Sauvignon Blanc. Also, I didn’t read the measurements on the recipe I used before heading to the liquor store, so I wanted to make sure I had more than enough. On my way back, I stopped at the bodega down the street for some large oranges, then scurried my way home to make my concoction.

I busted out my roommate’s enormous red pot, eyeballed how much wine I was pouring inside by my own standards (which ended up being the entire box) and combined the rest of the ingredients — fresh cut oranges, cinnamon sticks, mulling spices, sugar and an entire pint of Proper No. Twelve Irish Whiskey. I didn’t mean to use the whole pint, but my hand slipped.

I turned the heat on medium and let the mixture get itself to a simmer, stirring whenever I felt like it. When the simmering began, I turned the heat down to low and let it sit for 15 minutes, which was the lowest time recommended for serving. I’m impatient, so the second my 15-minute timer went off, I poured myself a cup.

The result? It was good-ish. Was I impressed with it, though? Not necessarily. It was way, way too bitter, and quite frankly, really strong. So, I poured a little bit more sugar in, added a little more cinnamon and let it sit for another 45 minutes and forced the saying “good things take time” into my cranium. 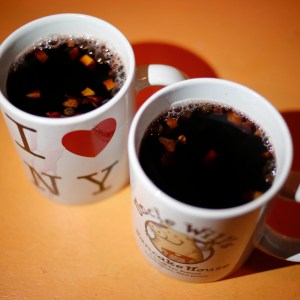 Upon my second tasting, I was shocked, to say the least. The mulled wine was absolutely delicious and I truly think I outdid myself. Occasionally while sipping, it did feel like my mouth was going a little numb, but I wasn’t sure if that was because of the copious amount of alcohol I included or the fact that I forgot to wash the skin of the oranges. Nonetheless, it was delicious.

I kept the burner on for the rest of the night, and the more it sat in the pot, the better the flavor got. And, hey, my apartment is still standing. I did it. I conquered my air fryer-less cooking fear and created a real masterpiece that made my snowy night. So, if I can do it, you can too.

One thing I suggest? Don’t skimp out on the sugar and maybe, just maybe, tone it down on the extra added alcohol. Don’t fully drop it, but definitely don’t add an entire pint of whiskey as I did. Nonetheless, it’s probably one of the easiest, most delicious things I’ve ever made on my stovetop. And when it comes to a warming winter-time drink, that’s precisely what I wanted.