Ah, internet debates. Silly disagreements that can turn into viral sensations at the drop of a hat because anyone — no matter how ill-informed — has the ability to weigh in.

Today, we’ve discovered a product that’s a direct result of one of the great internet debates of our time.

Is it pronounced Gif? Or Jif?

This is one of the biggest and most hotly-contested questions of the 21st century. As the humorous moving images have become the best way to spice up a work email or group text conversation, the debate has intensified.

According to the creator of the GIF, it’s a soft “g” sound — like Jif. But like anything on the internet, so many people, including Hillary Clinton on her 2016 campaign trail, have disagreed.

Well, now it’s time for a big brand to get involved. Specifically, a brand that has a unique attachment to this particular internet debate.

Jif peanut butter has collaborated with GIPHY, the largest online database of shareable gifs, to create the Gif Jif peanut butter, which will be available on Amazon sometime in the near future. 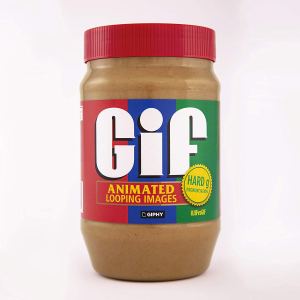 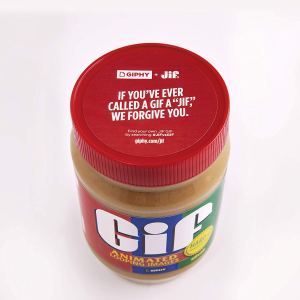 The brand clearly wanted to clarify its stance on the issue. They declare that using a hard “g” is the way to go, and that their peanut butter’s name, Jif, is distinctly articulated using a soft “g.”

No matter where you stand, this peanut butter is sure to be as delicious as their regular product and go on just as smoothly. Their stance, on the other hand, will probably receive some backlash. But hey, that’s what you get for stepping into the gif arena.

Unfortunately, this $10 peanut butter jar sold out on Amazon immediately, but you can sign up to receive updates on their Jif GIPHY peanut butter collaboration. In the meantime, we’ll keep an eye on eBay for you.