If you’ve been treating yourself with scrumptious snacks all year long in a valiant attempt to find any sense of happiness in this hellscape we are calling 2020, know that you’re not alone, I’ve been doing the same.

It initially started at the beginning of the pandemic in order to help my favorite local restaurants stay afloat by ordering takeout a couple of times a week. At that point, I wasn’t the most comfortable leaving my apartment to go to the grocery store. Also, I love me a prepared meal (as well as massive boxes of wine) delivered straight to my door, so it was a win-win.

Although I’m long beyond the days in which I’d order most of my meals right to my apartment, I was brought right back after I received an email from my new friends at Marco Sweets & Spices, who offered me a chance to try some of their gourmet ice creams. I am beyond lactose-intolerant, but ice cream straight to my front door? How the hell was I going to say no? And boy, am I glad I didn’t. My tastebuds have not been the same since.

Marco Sweets & Spices is a new culinary-inspired, direct-to-consumer ice cream brand offering five wild flavors including Ginger Dreamsicle, Vanilla Chai, Spicy PB Caramel, Thai-Coco Lime and Aztec Chocolate. Although I hadn’t ever even dreamed of any of these flavors before in my life, once I tasted each, I couldn’t put my spoon down. Did I eat four pints of ice cream in within 36 hours? Maybe so. Mind your business.

I was given one of each flavor to try out minus the Ginger Creamsicle, but given the creamy, sweet goodness each pint had to offer, I’m assuming it’s topnotch. But, without further adieu, let me start off by talking about my girl Vanilla Chai.

Let me first say that I do like chai, but I don’t love chai. If I’m going to Starbucks, I will never, ever order a chai latte. It’s kind of one of those things that I enjoy the idea of more than I enjoy drinking. Like, if it’s handed to me for free, I’ll drink it, but I’ll never get it myself. With that being said, damn, did this flavor fool my ass. From here on out, Marco’s Vanilla Chai is my chai exception. My chaiception. It was absolutely phenomenal. The spice blended so well with the vanilla in a way that I’m still so confused about. The taste began with the chai almost masking the vanilla entirely until bam, my mouth was infiltrated with the sweet, smooth blend of both. It was gritty in the way some vanilla bean ice creams are, yet creamy in texture and smooth on the way down. 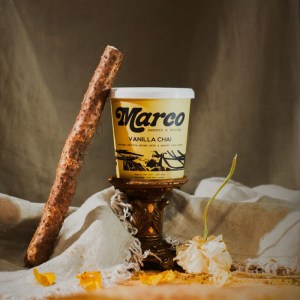 After my date with Vanilla Chai, I was in the mood to disappoint myself a little because I didn’t want to eat another whole pint of ice cream in one sitting as I watched Glow Up season two in my sweats. So, I figured I’d crack open the pint I assumed I’d like the least so I could just stuff it back into the freezer for a rainy day. On to Thai Coco-Lime I went.

The reason I thought I wouldn’t love it is that I don’t love lime unless it’s paired with tequila and salt. It’s never anything I thought I’d want in my ice cream, but I gave it a shot anyway. It wasn’t until I opened the pint and saw the light orange color of the ice cream before I read the label and noticed that this pint is also packed with dried chili. I was intrigued, so I took my first bite. I felt like I was sipping a pina colada in the sunshine in Puerto Rico. It was beyond creamy with a strong taste of coconut and only a hint of lime. I didn’t realize I was still in my small Brooklyn apartment until I went to swallow and there it was — the dried chili. It took me by surprise at first but it added so much flavor to the mix. I finished the pint. One thing it’s missing? Tequila. I was right. This is the perfect ice cream to blend and make into a fun summer cocktail with a punch of heat, so next time I get my hands on some Thai Coco-Lime, that’s going to be my first move. 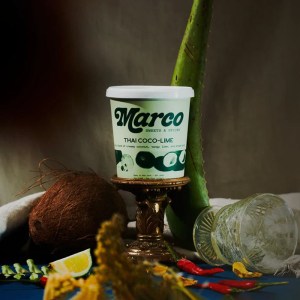 After that pint, I had to wait a few hours and recuperate and think about my life choices for a minute. Once fully recovered, it was time to tackle Aztec Chocolate.

I had no idea what to expect until I read the label and discovered that this flavor is rich dark chocolate mixed with cinnamon and chilies. You got me Marco, I was intrigued yet again. I took my first bite. With Aztec Chocolate, the chili isn’t as well hidden as it was with the Thai Coco-Lime, which kind of surprised me. I totally figured dark chocolate would overpower the other two flavors immensely, but I was able to even taste the cinnamon right away too. I don’t know if this explanation makes any sense in the slightest, but this flavor reminds me of a hellish Christmas. Like, the chocolate and cinnamon mix is giving me some deck the halls type of vibe, but the chili is trying to drag me by the feet into the ground. She is spicy! But, oh is she delicious. 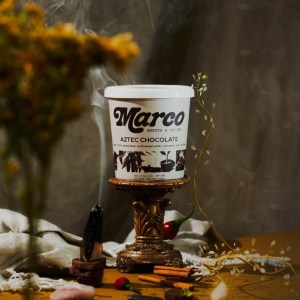 Last but not least, I was about to try the flavor I was most curious about. Let me start by saying I am a sucker for both caramel and peanut butter. I love them both to my core and I would take a bullet for either. But the word “Spicy” infiltrated with “PB Caramel” really had me shook, and yet again, very intrigued. So, I popped the pint out of the fridge and cracked open the lid.

Appearance-wise, Spicy PB Caramel gave us a whole new look. She’s drowned in an almost floral shaping of caramel directly in the middle, and the ice cream itself is where the spicy peanut butter comes in. I just have to say, I was absolutely gobsmacked. The spiciness in the ice cream is not overwhelming in the slightest but brings a much-needed break from the over-sweetness caramel tends to have. The two flavors blend so well with the peanut butter ice cream in a way that shouldn’t make sense at all. And yet it works. All I know is that I’m so glad I saved Spicy PB Caramel for last. 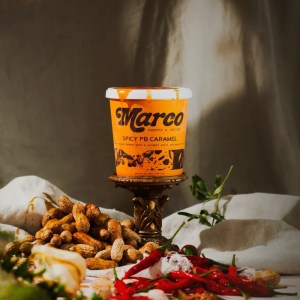 I will come out and say that if you have any hesitations in the slightest, you shouldn’t. This ice cream has completely changed the game of gourmet ice cream and I’m beyond impressed. I have to say, although Spicy PB Caramel was the clear winner for me, I am most surprised with my experience tasting the Thai Coco-Lime. Out of all the flavors, that is easily the most versatile and really was the first time Marco threw me for a loop, so for that, Miss Thai Coco-Lime will always have a special place in my heart.

If you’re ready to snag your order, you can get five delicious pints for just $55 — which means you can try one of each. And hey, if you get your hands on that Ginger Creamsicle flavor, hit me up. I want to know how it is!