I first became aware of Momofuku back in 2012 when its Canadian location opened in Toronto. Admittedly, most of my trips there included making a beeline to the back of the restaurant for the small Milk Bar location, allowing me to get my weekly fix of B’Day truffles. Thankfully, both companies have now made it possible for fans to enjoy their offerings from home.

While Milk Bar delivers its goods pre-made, Momofuku requires a bit more elbow grease. But after sampling its new lineup of noodles and pantry staples, we can safely say it’s worth a few minutes in the kitchen to get a restaurant-quality dish. (And that’s coming from a cooking-adverse chef who previously ate dessert truffles as a full meal.)

Momofuku was founded by chef David Chang, who opened his first restaurant in 2004. Under the Momofuku brand of restaurants, Chang has become known for his high-quality ramen dishes. His Momofuku Ko location was awarded two Michelin stars in 2009. Chang has produced and starred in several TV shows and podcasts, including Netflix’s Ugly Delicious and Breakfast, Lunch and Dinner, and he’s written several best-selling cookbooks. So yeah, we were pretty excited to try our hand at becoming a chef with the new line of at-home noodles and pantry staples created by Chang.

We tested out the three noodles offered by Momofuku: Soy & Scallion, Spicy Soy and Tingly Chili. We also tried the items included in its Pantry Starter Pack, including the Tamari, Chili Crunch and its three seasoned salts Spicy, Savory and Tingly. The Pantry Starter Pack online includes the Momofuku Soy Sauce as well, but ours came with the new Rice Vinegar instead. 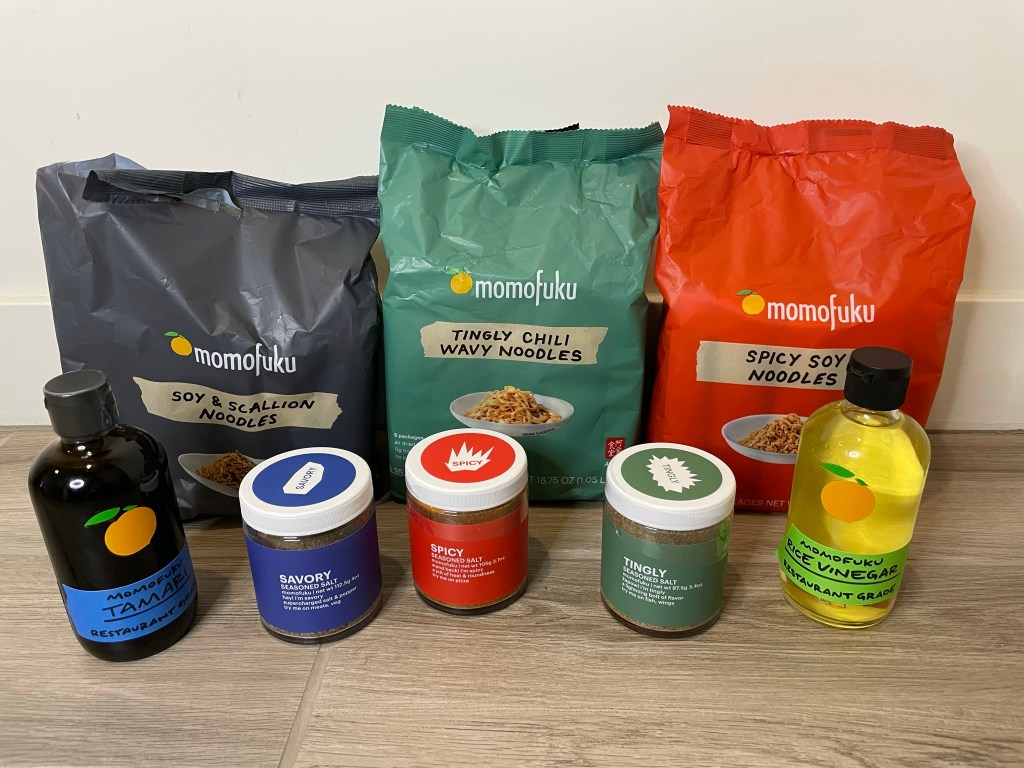 The design of all the products is colorful and fun enough to make even microwave chefs excited to cook new recipes. The seasoned salts all boast their own color-coded label explaining the flavor and suggesting how to use the salt. Essentially, they offer an easy way to add more flavor to just about any dish. 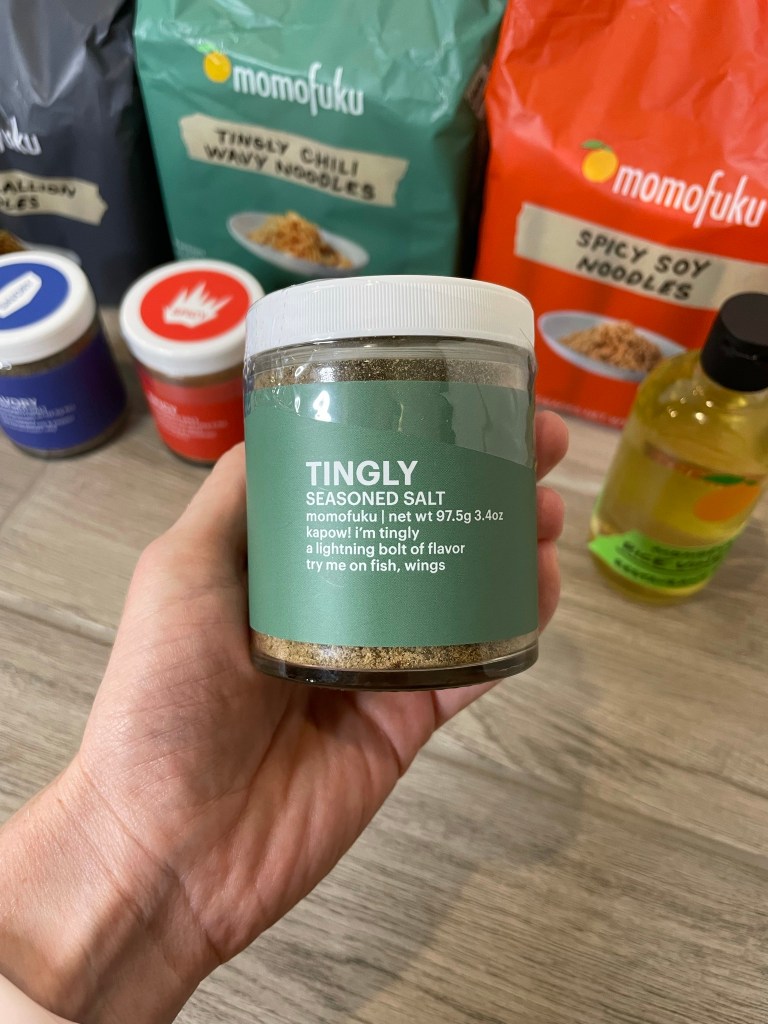 The noodles are also color coordinated based on flavor, making it easy to glance inside your pantry and quickly identify which noodles you’re in the mood for (spoiler – it may be all three). Inside the large bag of noodles are five individually packed servings, which includes one serving of noodles and their corresponding sauce. The white individual noodle packages, like the one shown below, don’t have the flavor written on the outside, so be careful to not mix up your noodles when removing them from their larger packaging (you can kinda read the seasoning packet through the white package if necessary). 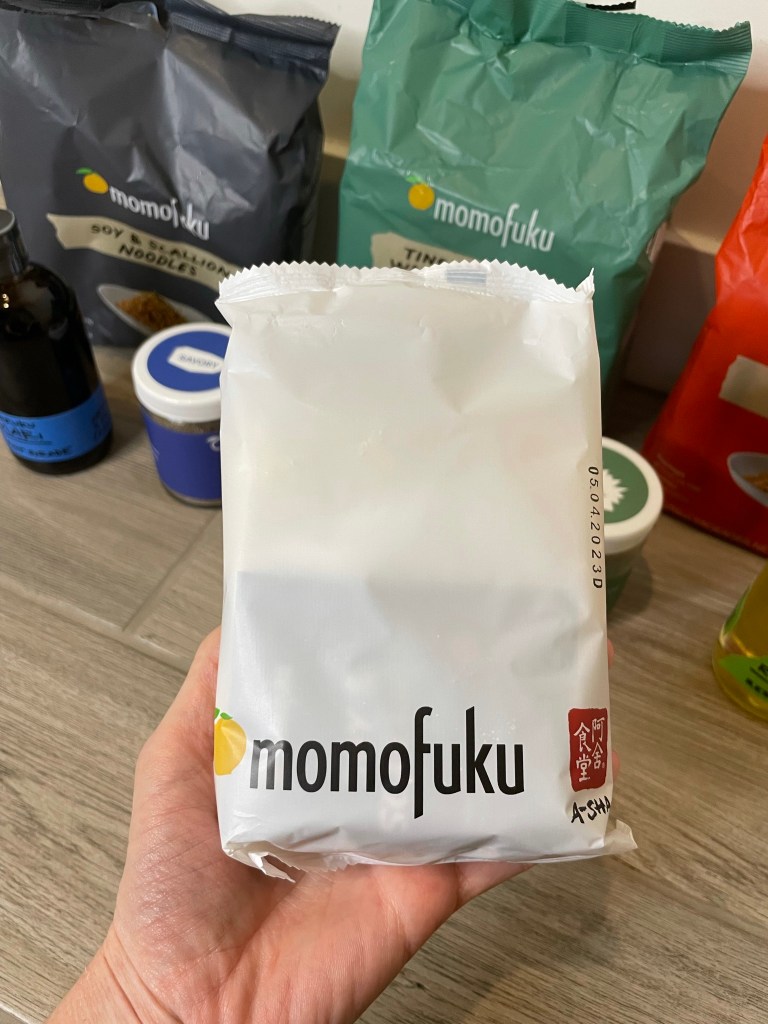 The Tamari and Rice Vinegar have labels designed to look handwritten and taped on by Chang. We really liked this design element, as it made the Momofuku items stand out in our pantry and us excited to cook like a “real” chef. 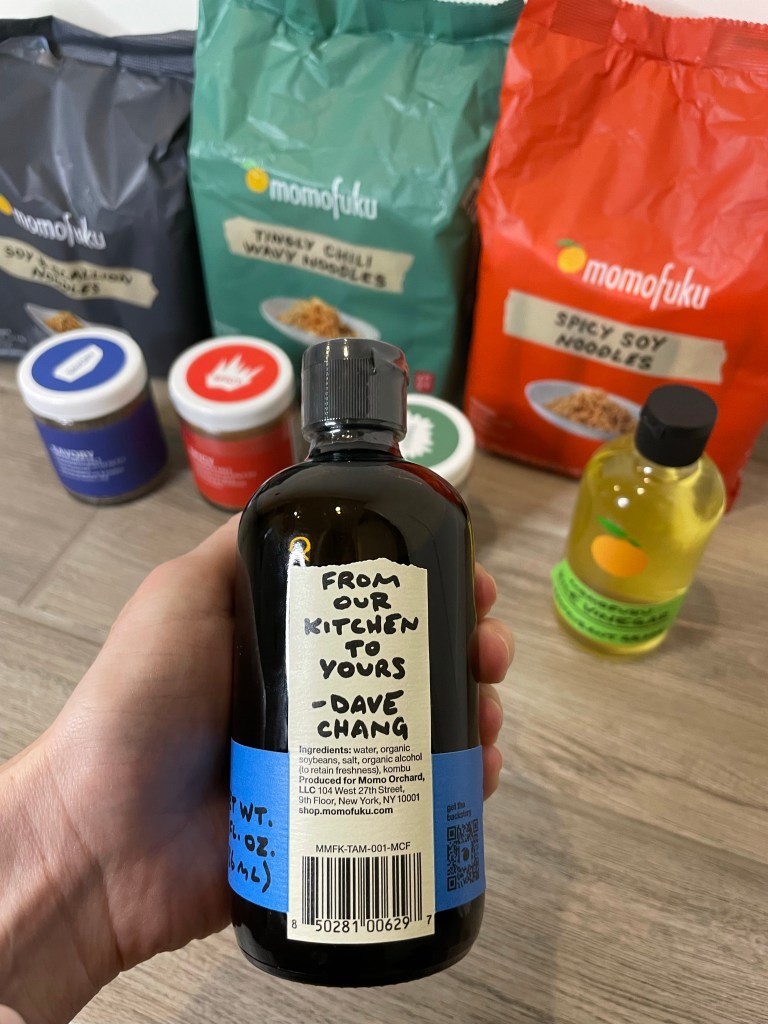 The seasoned salts, Tamari and Rice Vinegar all have short ingredient lists, which is always a plus when looking for items that haven’t been heavily processed. Similarly, the noodles are made from high-quality ingredients and aren’t packed with preservatives. The Rice Vinegar is organic, but it appears to be the only item sold by Momofuku that is USDA certified. 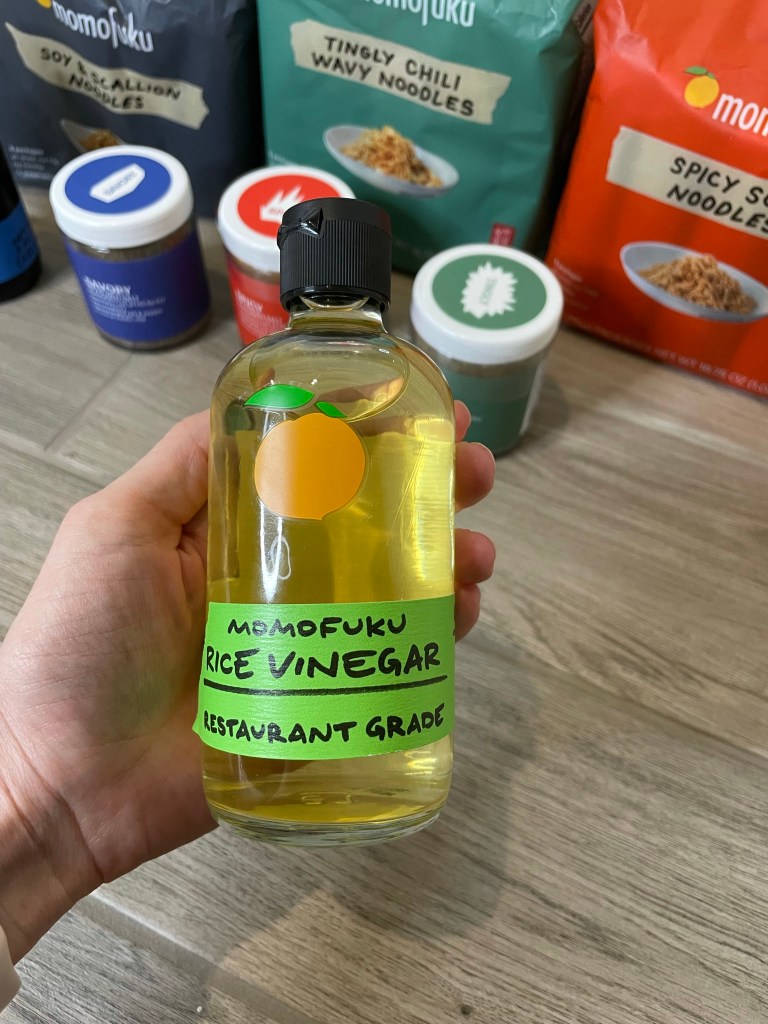 The downside to the noodles is that they contain soy and wheat, which will be an issue for those with soy allergies or anyone who is gluten-free. 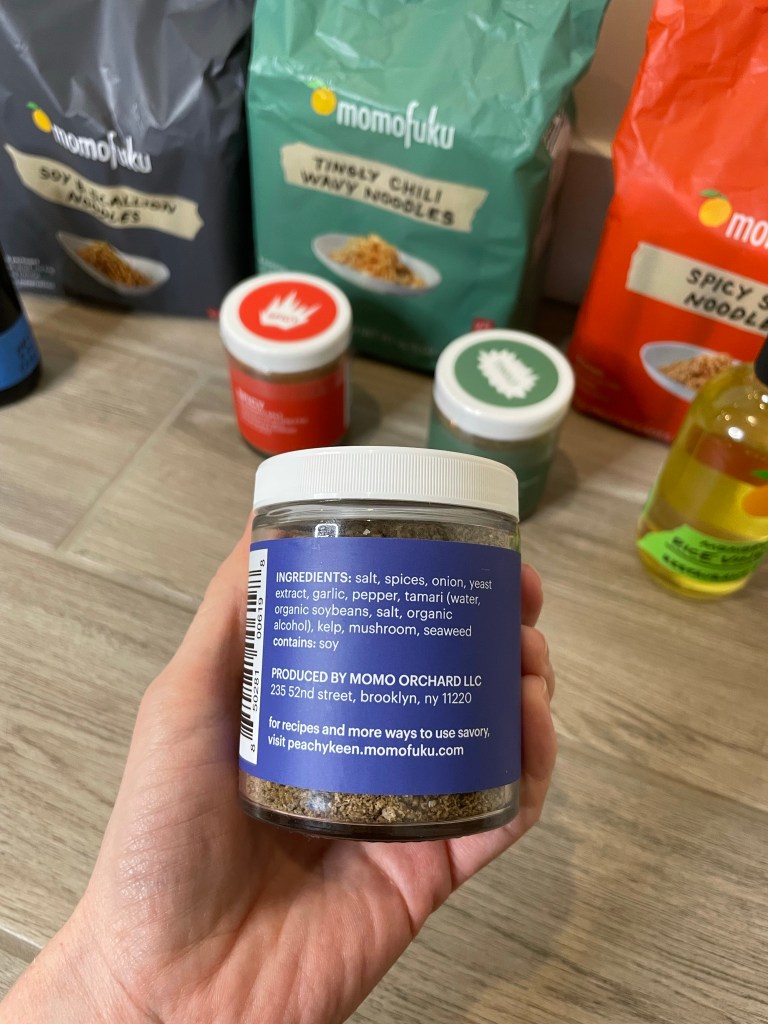 Momofuku has customers covered when it comes to recipes. While the noodles can be enjoyed on their own, there are several ways to stretch the ramen packs by adding more ingredients and turning them into larger dishes, which helps to offset the cost.

The Rice Vinegar is now our go-to with raw veggies. A few dashes of the vinegar on cucumbers is delightful and acts as an instant salad. We liked adding the Chili Crunch to our weekly pizza dinner and tried it as a dip for hot wings, which was also a winner.

The Momofuku site has pages of recipes that can be sorted by product, which makes it easy to start incorporating specific items if you decide to buy things a la carte. We tried a few of the recipes to test out the noodles and pantry staples and while we still prefer when other people cook, these dishes actually tasted like restaurant quality. Are we secret chef geniuses? Meh, it’s probably the Momofuku ingredients.

Since our sampler didn’t include the Momofuku Soy Sauce, we used the Tamari along with the Soy & Scallion Noodles when making David Chang’s Fridge Cleanout Stir Fry. Adding in firm tofu, red peppers, asparagus, olive oil and agave, we can safely say this was the best stir fry we’ve ever made at home and one of the best we’ve had, well, ever.

Admittedly, our stir frys are typically pretty pedestrian with a basic soy sauce on top of tofu and veggies. Adding the Tamari delivers a less salty taste than traditional soy sauce, and the Soy & Scallion Noodles, which are our fave of all three noodles, brought the dish together and nailed the flavor rating. This plate is one noodle packet and was split between two people. We felt full afterward without feeling gross or bloated. 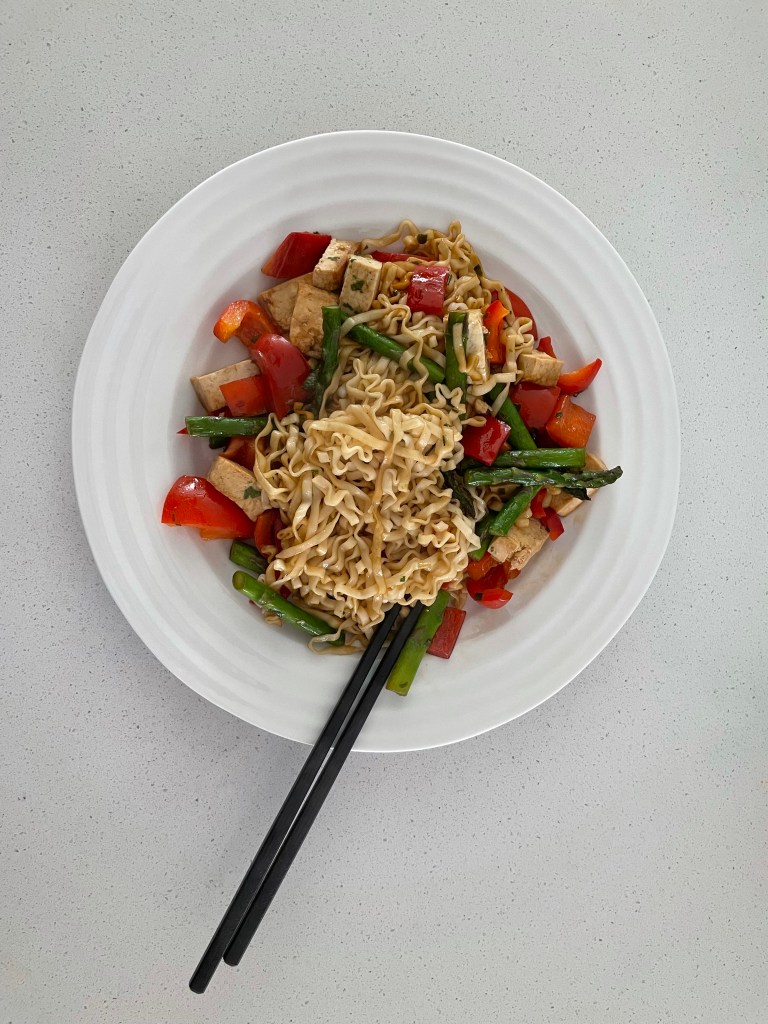 If you’re looking for a comfort dish that is full of flavor, try the Cheesy Tingly Wavy Noodle Bake With Spicy Pork. We were slightly intimidated by this recipe at first, specifically cooking the dish on the stovetop, then the oven, back on the stovetop and then into the broiler. That’s legit chef stuff. Thankfully, the seasoned salts and Tingly Wavy Noodles meant we didn’t have to measure and mix a laundry list of spices, and Momofuku has a video to break down the step-by-step process. 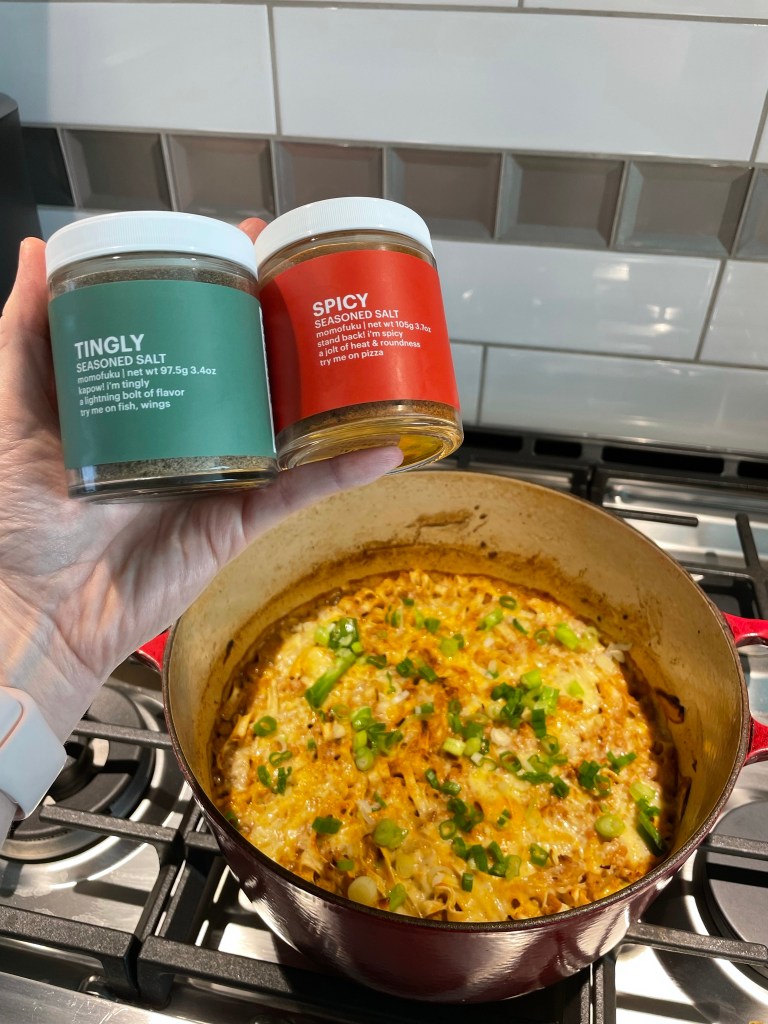 We barely had time to snap a pic before this pot of spicy and savory noodles and pork was gone. We got brave for the last few bites and added extra heat from the Chili Crunch, which was very spicy and very good.

GINGER SCALLION NOODLES FOR ONE

This took us five minutes to make and even less time to eat. It was filling but light and kept us energized for hours thanks to the addition of the egg. The noodles had a ton of flavor without anything being overpowering. This would be a great option for anyone averse to spicy foods. 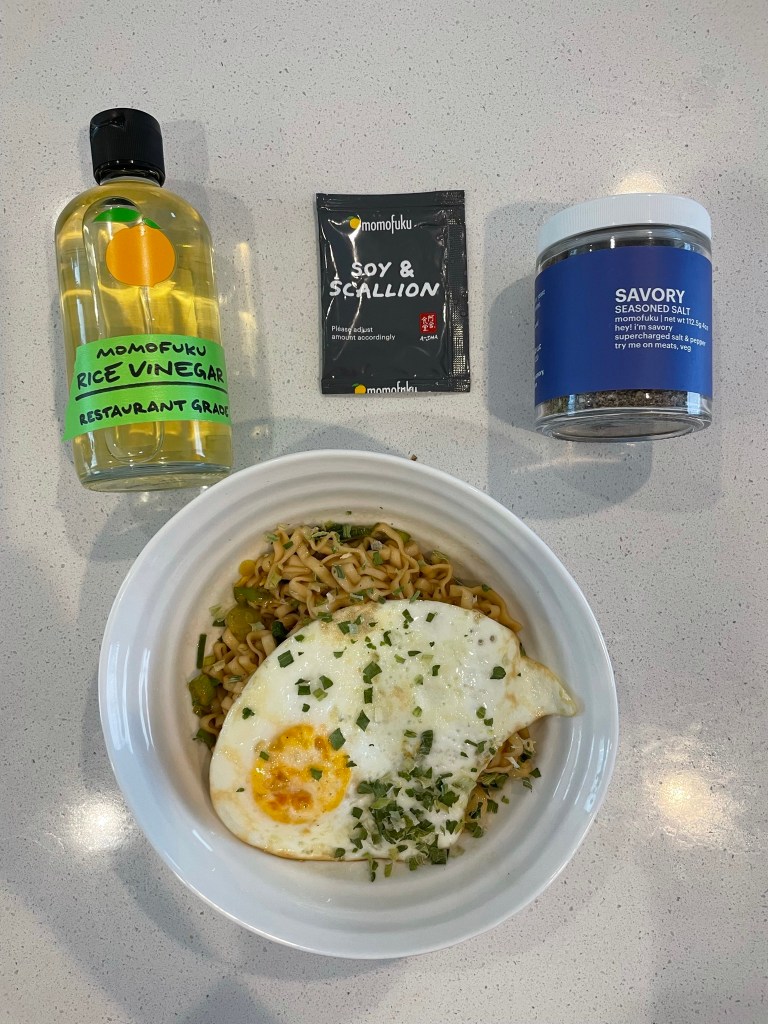 The seasoned salts arrived with a one-year expiration, which is shorter compared to other salts and spices we found in our cupboard. Like most seasoned salts, the Momofuku salts could still be used after their best by date, but the flavors would be muted and there may be some clumping.

The noodles also have a one-year expiration, which is shorter than most ramen packs. This is likely because Momofuku includes a liquid sauce with its noodles, compared to the typical powdered pack included with other ramen options. So the price point is higher and the expiration date shorter, but the taste and quality are better than most competitors.

The Tamari had a long shelf life, about 18 months, and the Rice Vinegar has the shortest, with less than a year.

While the Momofuku Pantry Starter Set and Noodle Variety Set are pricey, you can’t beat the quality or taste. It’s a great option for anyone who likes to cook or for someone who needs help in the kitchen. It also makes a great gift, especially for those living in an area with limited restaurant options.

Should You Buy It?

Yes. We definitely recommend the Pantry Starter Pack. It’s sold at a discount compared to buying each item individually (you essentially get the Tamari for free) and it allows you to play with flavors and figure out what seasoned salts you enjoy. The Tamari and Soy Sauce or Rice Vinegar are all items that can be used in several Asian-style dishes, and the Chili Crunch is a must for anyone who likes spice.

The quality and taste are great, but again, the noodles are significantly more expensive than most other available ramen noodle packs. If you’re a ramen fan, we recommend opting for the variety pack to try each flavor. Buying directly from the Momofuku online shop is also less expensive than buying from Amazon, but only if you meet the $45 minimum for free shipping. 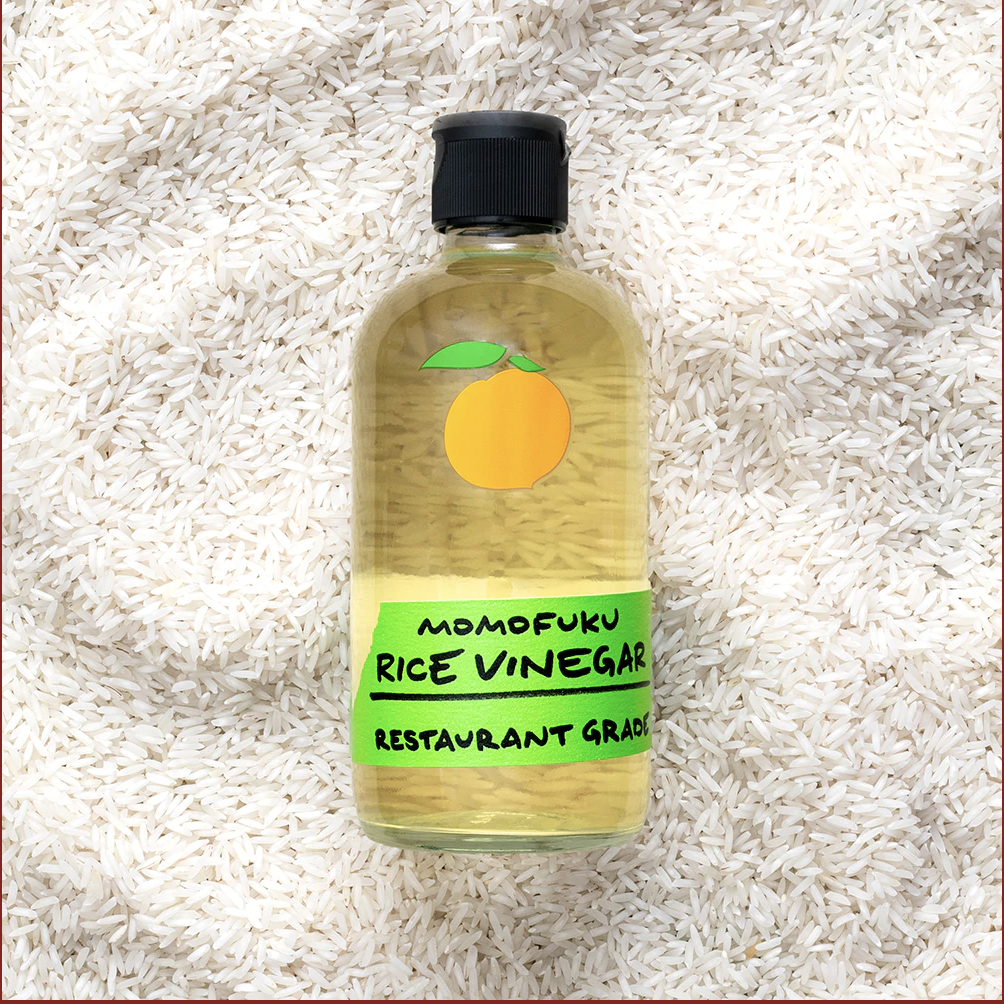 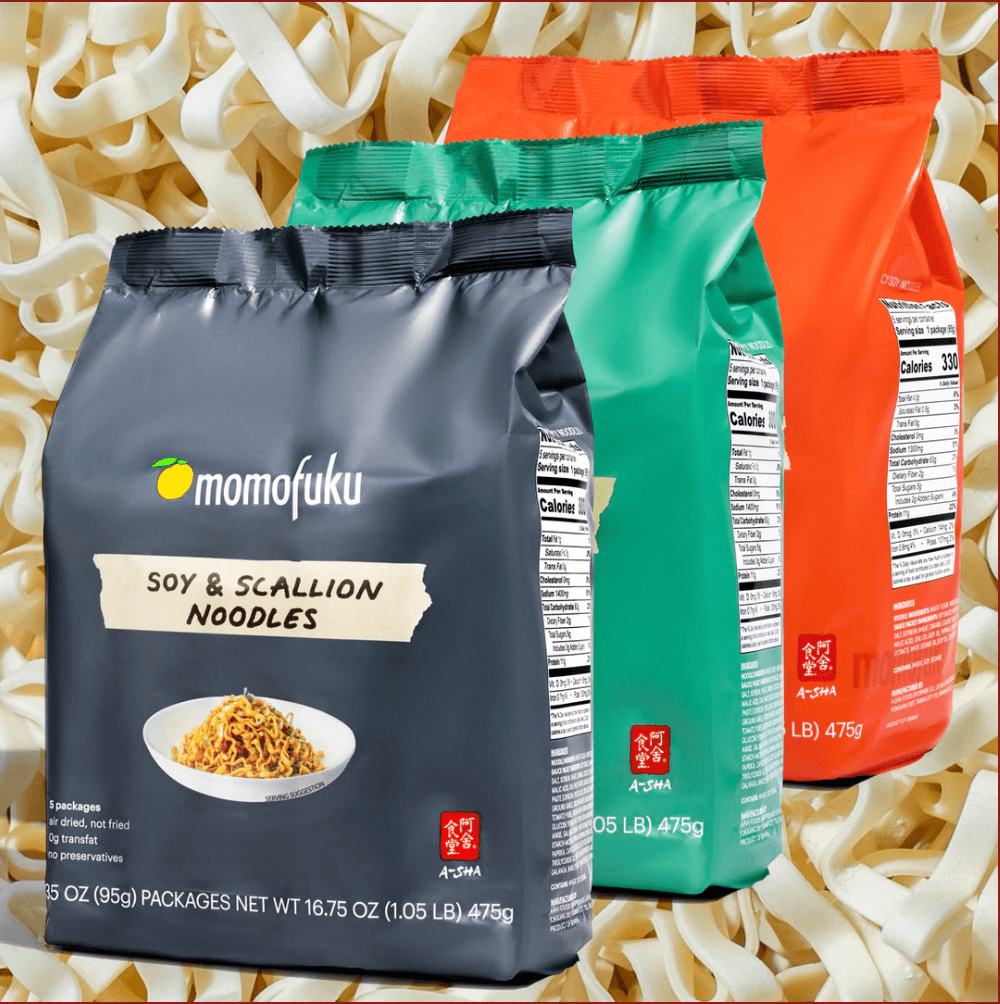