Worried over food preparation for Thanksgiving? Let me make you worry more by reminding you that Thanksgiving is only a few days away. Though you’ve already got your turkey in the freezer and your potatoes are ready for mashing, there’s a good chance you’re forgetting about one important Thanksgiving component: dessert. But, there’s no need to panic, you can get all of your favorite desserts as soon as possible with the help of Senza Gluten, Greenwich Village’s mouthwatering gluten-free bakery.

Senza Gluten (meaning ‘without gluten’ in Italian) is an iconic Italian bakery that doesn’t skimp out on flavor and texture via their baked goods. They have a number of treats on their current menu, ranging from gluten-free goodies like pumpkin pie, chocolate chip cookies, loaves of bread, spicy pumpkin muffins and much, much more. 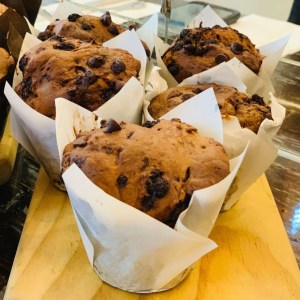 There are a couple of things you might be thinking. First and foremost, if you don’t live near NYC, you might be wondering how in the hell you’re going to pick up these delicious treats in time for Thanksgiving. The answer? Senza Gluten has the ability to deliver all over the United States in just a few days. Secondly, you’re probably wondering, “why in the hell would I purchase gluten-free desserts when I don’t have any gluten restrictions?” We’re glad you asked. Let us tell you why.

I wondered the same thing prior to testing a few treats from Senza Gluten out myself. I have a gluten-free cousin named Madeline who, quite admittedly, isn’t the best baker I’ve ever met. Every holiday we spend together, she will make a gluten-free treat or two for the family to try. Each and every time it tastes like cardboard, so I was expecting the exact same thing from Senza Gluten. Much to my surprise, every single baked good I was given from Senza Gluten was absolutely delicious. I had to convince my roommates through pinky promises that they truly were not chowing down on gluten. Everybody in the house was genuinely shook. 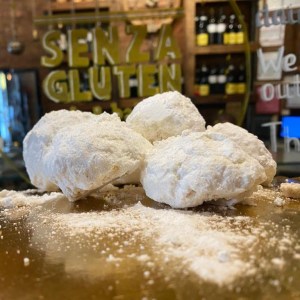 Let me start with the chocolate chip and snowball cookies I was given from Senza Gluten. Upon visual inspection, no part of me would have thought that they did not contain gluten. All desserts made by my cousin Madeline are quite obviously gluten-free because they look like they didn’t bake right inside the oven. Not these cookies. They looked perfect. After thinking I only wanted half of each, I housed like, four in one sitting. Both were totally scrumptious. The chocolate chip cookies were some of the best I’ve ever had and I can’t even point my finger on the reason why. The snowball cookies I had actually never had, but they were excellent. Quite messy, but it’s the kind of cookie that if it were not messy, it wouldn’t be as enjoyable. 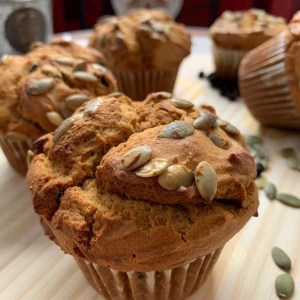 I also had the chance to try Senza Gluten’s spicy pumpkin muffins. They came in a pack of four and, to the eye, looked tasty as can be. Upon my first bite, I wasn’t initially so impressed — and then it hit me. I was jokingly making a video review for my friends on Snapchat as I bit in and the visual I made with my face said it all. I began my chewing slightly unimpressed until flavor hit me like a brick wall. It was a total slow burn. After the first five seconds, it’s safe to say that these muffins can claim a top spot in the best-muffins-I’ve-ever-tried-in-my-life list. And I love a good muffin, so that should say a lot. 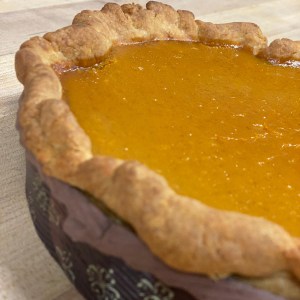 Lastly, Senza Gluten gifted me a medium-sized pumpkin pie. I can’t lie to you, though, I’m saving it for Turkey Day so it’s currently sitting in my freezer. I’m so impressed with Senza Gluten’s baked goods that I want to trick my family into thinking they’re eating a regular pumpkin pie this Thanksgiving, when in fact, it’s completely gluten-free. I can’t wait to see the look on their faces when I spill that tea.

If you’re looking to snag some baked goods from Senza Gluten before Thanksgiving, you have to place your order before this Tuesday, November 24th at 12 PM ET. Senza Gluten only ships on Mondays and Tuesdays, so Tuesday is the very last day you can get these goods before the big day. If you miss the last shipment, we just suggest you hold off until Christmas and bake some last-minute, half-assed cookies instead. That’s no fun, though, so, place your order now before it’s too late.

Say Thanks with the 43 Best Hostess Gifts for Thanksgiving & Christmas