The 2000s have been an amazing time for innovation and globalization in coffee. Since the turn of the millennium, Americans have gone from strictly drip coffee maker brewers to a population who love to experiment with different preparation methods, from pods to pour-overs. However, one preparation method that is increasingly popular in the UK, Europe and Australia but still yet to really catch on in the USA is steeped coffee.

Recently, the appropriately named company, Steeped Coffee, has been making headway into this category of coffee preparation. They even won the “Best New Product” award at the 2019 Specialty Coffee Expo, but still, most Americans have never heard of steeped coffee. That’s a real shame because this is a super easy and environmentally friendly way to make coffee.

Below, we’ll introduce the concept of steeped coffee, answer all your questions about this preparation method and run through some of the best steeped coffee options available for order on Amazon.

What is Steeped Coffee?

Steeped coffee draws on the idea that all you need to do to create a cup of coffee is combine ground beans with hot (or cold) water. While most brewing methods pass hot water through coffee grounds to create a final product, steeped coffee submerges the grounds in hot water. In reality, the process of steeping coffee is very similar to making a cup of tea.

In general, stepped coffee is sold in single-serving bags. These bags contain an individual serving of coffee grounds and are placed in a single mug of hot water for several minutes.

Of course, this has several advantages to the consumer. As steeped coffee requires very little preparation, it could be considered the lazy man’s coffee brewing method. It’s also a great way to create individual servings of coffee without waste or complicated machinery. Read on to learn all about steeped coffee and why you should buy into this new method of coffee preparation.

What is the Difference Between Brewing and Steeping Coffee?

When you brew coffee, whether that’s using a traditional coffee maker, a Keurig or a V60, you’re essentially forcing hot water to pass through ground coffee beans. When the water goes in, it is a clear substance. When it comes out the other side, it’s coffee. In between, it has picked up all the oils and flavors from the coffee beans, giving you the rich, chocolatey, slightly acidic tones usually present in brewed coffee.

On the other hand, when you steep coffee, you have to submerge a bag full of coffee grounds inside a container of hot water. The coffee grounds then sit in contact with the hot water for one minute or more, allowing the oils and flavors to seep out of the beans and into the water. The end result is a very similar cup of coffee with rich, acidic tones.

Although both brewing and steeping will both create a cup of coffee with an approximate 15:1 water to coffee ratio (as long as you aren’t brewing espresso), there are two really major differences. First, steeping coffee really allows you to control how strong or weak your coffee is, as you can simply remove the bag of coffee at any point during the steeping process.

Second, steeping coffee is usually done in individual servings, meaning you likely won’t create a whole pot of steeped coffee. So, brewing may be a better option for a crowd. 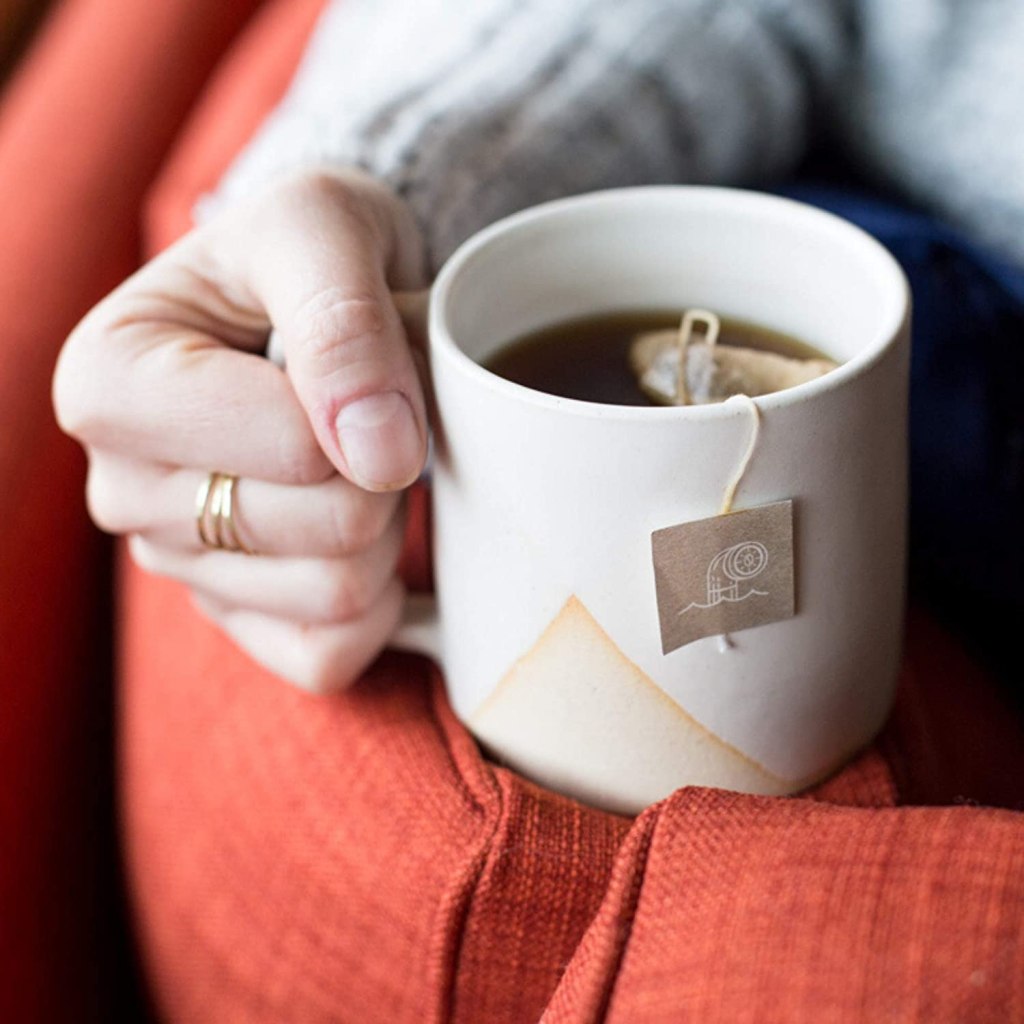 As mentioned above, steeping coffee is really meant for creating individual servings. If you’ve been keeping up with the coffee industry in recent years, you’ll know that single serving is also a trend in a different category of brewing. Yes, we’re talking about pots or K-cups.

Many producers of steeped coffee have created their product in the hope of taking on the single-serve pods that have taken the coffee industry by storm. And, steeped coffee offers three distinct advantages over pods:

As the world begins to care more about the environment, it’s easy to see why the popularity of pods should give way to the convenience and eco-friendliness of steeped coffee bags.

Why Can’t You Just Put Ground Coffee in a Tea Bag/Diffuser?

In reality, you could put ground coffee into a tea bag or tea diffuser and use that to create a cup of coffee through steeping. It does work, but you won’t get the same results as you will when you use a designed-for-purpose coffee steeping bag.

For those reasons, we recommend buying specially designed coffee for steeping rather than trying to DIY this preparation method.

How to Make Steeped Coffee?

Although each brand of steeped coffee offers slightly different recommendations, the basics are the same.

To make steeped coffee, start with a mug full of boiling hot water. Remove the bag of coffee from its exterior packaging, and insert it into the mug of hot water. Wait for one minute, then dip the coffee up and down around the mug for an additional 15 to 30 seconds, depending on how strong you like your coffee. (Note that some brands recommend dipping the coffee at the beginning of the steeping process rather than the end.) Remove the bag of coffee grounds from the cup and dispose of it with your organic waste. Finally, sit back, relax and enjoy your individual serving of coffee.

Without further ado, let’s explore some of the best steeped coffee on the market. As a new category of coffee, there aren’t many options, but the ones you’ll find below will provide both quality and innovation to your daily hot drink habit.

Although other brands had started the steeped coffee movement in the UK and Australia, Steeped Coffee Store Single Serve Coffee really kicked off the trend here in the United States. And, they massively improved on what those other companies abroad were doing by inventing a completely new, biodegradable material for the coffee bags. Instead of using something akin to a tea bag, the CEO and founder, Josh Wilbur, found a plant-based material that’s neither a paper filter or nylon yet allows the oils and flavor to flow from the beans to your cup of joe. Each of the single-serve bags contains ground coffee that’s roasted in micro batches and then sealed in the steeping bags with a bit of nitrogen gas to ensure the coffee arrives at your doorstep fresh and ready to drink. 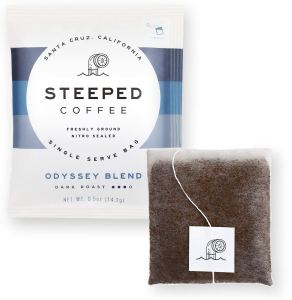 As the steeped coffee trend really starts to gain in popularity, we will likely see more and more brands produce single-serving bags of their coffee. Folgers is really the first major coffee producer to do so. For under $7, which is about half the price you’ll pay for other brands of steeped coffee, you’ll receive 19 brew bags. Why this box comes with 19 bags and not 20 is a mystery to us. However, the bags make a decent cup of coffee that tastes just like a cup of Folgers after only 75 seconds of steeping. So, if you’re looking for a cheaper alternative to some of the best steeped coffees or you just want to try out steeping coffee for the first, this might be the best option for you. 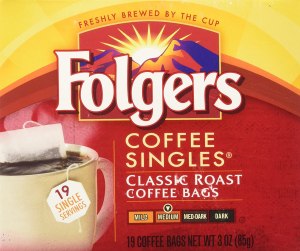 The good people at CrownCode Coffee believe you should buy their steeped coffee for four reasons. First, like all steeped coffee, these bags are convenient for enjoying on the go or when you’re short on time at home. Second, the beans they use are of the highest quality. They are ground and sealed at the peak of freshness to ensure a delicious aroma and strong taste in your cup. Third, their single-serve bags are cost-efficient as they won’t waste your time and won’t waste ground coffee, either. You’ll never have unused brew left over in your coffee pot when you leave for work in the morning. Fourth and finally, CrownCode Coffee makes all their products to be completely environmentally friendly, which is the most impressive feature to us. The bags are fully compostable, meaning you don’t have to throw away any plastic pods or foil wrappers. All in all, CrownCode Coffee is a solid entry into the steeped coffee category. 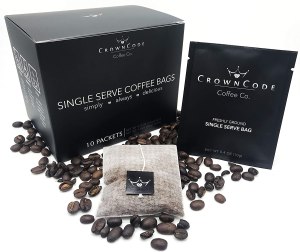 Fans of cold brew might have noticed that steeping coffee is a lot like making a pot of cold brew. Both methods of preparation require letting pods or packs of ground coffee sit in water. So, if you clicked onto this article hoping for some recommendations on cold brew, we’d thought we would include our favorite cold brew coffee for you to try. The Starbucks Cold Brew Coffee packets are an easy way to make cafe-quality cold brew at home. Simply place two packs in 32 ounces of cold water and let the mixture sit for 24 hours. Then, remove the packets of coffee and add three more cups of cold water for a whole pitcher of caffeine-filled goodness. While we don’t think anyone has ever tried making hot steeped coffee using Starbucks Cold Brew Coffee packets, we don’t see why it wouldn’t work. However, if you do try this type of preparation, be sure to steep the Starbucks packets in a large pitcher of hot water rather than a single cup. 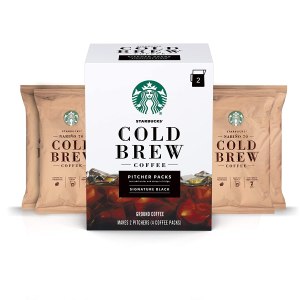 While not exactly the same as steeped coffee, Kuju Coffee Premium Single-Serve Pour-Over Coffee is so similar, we decided to include it in our list. Instead of being a tea-like bag that you place in hot water, these single-serve bags open at the top so that you can create a delicious cup of pour-over. Simply, place the open pouch in your mug, pour in eight to 12 punches of hot water and wait a few minutes until the brew is as strong as you like it. If you don’t have the right equipment to get hot water inside the bag, these pouches can also easily be steeped. 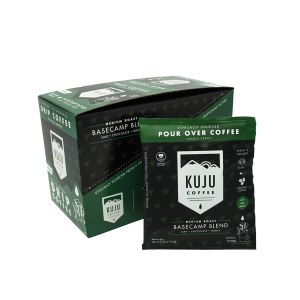 Rise and Shine: Here Are the 11 Best Coffee Creamers to Help You Jumpstart Your Day