Why did you start drinking coffee? We’re going to bet it had something to do with the beverage’s caffeine content. Whether you were a student or an office worker when you enjoyed your first cup of joe, you’re likely still drinking this addicting drink today. And, you probably like your coffee strong, perhaps you even dream of the strongest coffee in the world? Why else would you be reading this article?

Below, we’ll discuss the six strongest coffees in the world that are available for purchase online and in the United States. But, first, there are a few questions we need to clear up, such as:

When discussing the strongest coffee in the world, we must first define what “strong” means. According to scientists, there are two different ways to determine the strength of a cup of coffee. These brews either have:

You might be wondering, what are total dissolved solids? Scientists use this term to describe everything in a cup of coffee that’s not water. A cup with a high number of total dissolved solids tastes thicker and more intense. However, that doesn’t necessarily mean it has a high caffeine content.

On the other hand, the general public mostly adheres to the first type of strong coffee. When you say you want a strong cup of coffee, you most likely are referring to a cup with a lot of caffeine.

The danger here is to mix the two. Although there’s a general misconception that a cup of coffee that tastes strong (ie. has a high percentage of total dissolved solids) is high in caffeine content, that’s simply not the case. In fact, as we’ll learn below, espresso, which many people think of as the strongest form of coffee, has one of the smallest amounts of caffeine per serving.

Therefore, for the purposes of this article, we should note that we are using the term “strongest coffee in the world” to refer to the caffeine content, not the taste.

Keep reading to learn more about how to create both strong-tasting coffee and a cup that’s high in caffeine.

How to Brew a Highly Caffeinated Cup of Coffee

As mentioned above, for this article, the strongest coffee in the world has the highest caffeine content. And, while you could buy some of the coffee beans listed below, which are engineered to be high in caffeine thanks to their bean blends and roasting process, there are a few ways to ensure a normal cup of coffee has an extra bit of caffeine.

Let’s run through three of the factors that may or may not make a difference.

Among coffee lovers, there’s a common myth floating around. That is the thought that a darker roast equals more caffeine. In fact, bean for bean, dark and light roast coffees have the same amount of caffeine.

The verdict here is that the roast ultimately doesn’t make a difference to the caffeine content.

There are two coffee plants used in almost all the coffee produced around the world. They are Arabica and Robusta.

Of the two, Arabica is the most sought after thanks to its complex flavor. Robusta, on the other hand, tends to provide a very earthy, somewhat bitter brew.

But, if you’re looking for the highest caffeine content, look for a bag of beans that’s purely Robusta. These coffee beans contain nearly twice as much caffeine as Arabica beans do. For that reason, many of the strongest coffees in the world tend to include a higher percentage of Robusta beans.

Unless you buy a bag of beans engineered to be high in caffeine content, the biggest difference you can make to the caffeine content in your cup of coffee is the brewing method.

Here is a breakdown of the average amount of caffeine in a standard serving using the following brewing methods (source):

But, it is clear that brewing method has a strong impact on caffeine content.

So, if you want the most caffeinated coffee possible without buying highly caffeinated beans, your best bet is to make nitro coffee using 100% robusta beans. But, if you want an even bigger hit of caffeine, read on to learn more about the strongest coffee in the world.

How to Brew a Strong Tasting Cup of Coffee 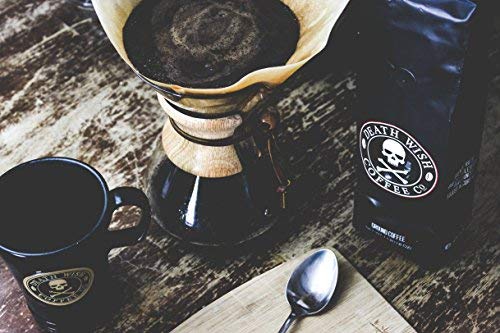 Although the focus of this article is on highly caffeinated coffee, we thought we should briefly outline how to brew a strong-tasting cup of coffee as well. If we use the above three factors, the two most important to a strong taste are the roast and the beans.

Generally, the human palate associates a darker roast with a stronger flavor. That’s because these roasts tend to be bitter, which is the same taste profile created by a high caffeine content.

In addition, anything with a high percentage of total dissolved solids will taste strong to your palate. Espresso and moka pots tend to brew the strongest coffee in this regard.

You can also generally make a stronger tasting cup of coffee using a standard coffee machine if you include more scoops of ground coffee than normal. This will change the water to grounds ratio, creating a “stronger” brew in your pot.

Caffeine is a drug and is addicting. It appears to be safe in moderation, but too much caffeine can have an adverse impact on your health.

According to the Mayo Clinic, about 400 mg of caffeine per day is safe for the average adult. More than that could cause a slew of side effects, including:

That means that a cup of any of the coffees listed below could be considered unhealthy. However, different people have different reactions to caffeine. Only you know your body, but should you start feeling overly jittery or you aren’t getting enough sleep at night after switching to a highly caffeinated coffee, it’s best to go back to your normal beans.

The Strongest Coffee in the World

Without further ado, here are the six strongest coffees in the world when measured by caffeine content.

Devil Mountain Coffee Black Label is the most caffeinated coffee you can buy on Amazon, hands down, making it probably the strongest coffee in the world. With an extremely high caffeine content of 1,555 mg per 12 ounces, this coffee could actually be quite dangerous to people who don’t have a high caffeine tolerance. The smooth, strong coffee isn’t as bitter as you might expect and still boasts a nice aroma with a rich flavor. Although Devil Mountain Coffee has not disclosed the type of beans used, they are organically grown and non-GMO. 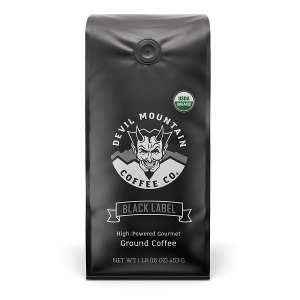 Not far behind Devil Mountain Coffee Black Label comes Black Insomnia Coffee with only 50 mg less caffeine per 12 ounces of brewed coffee. Black Insomnia uses a rich blend of both Arabica and Robusta coffee beans with no additives as well as a unique and highly secretive roasting process to arrive at their final product. The result is a brew with caramel, hazelnut and macadamia aromas as well as a dark chocolate flavor. This coffee is available in both ground or whole bean bags, but we recommend whole beans to ensure that you’re brewing with the freshest beans possible. 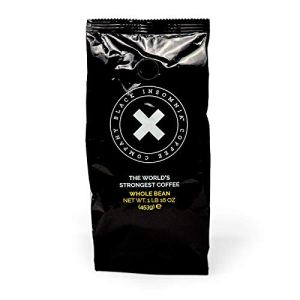 A lot of highly caffeinated coffees tend to be quite bitter. This is due to the type of beans used (mostly Robusta) as well as the roasting process. However, Coffee SIN Performance Coffee delivers a product that’s both high in caffeine content and quite smooth. The dark roast beans have a flavor profile similar to dark chocolate. In addition, many reviewers comment that this is the perfect pre-workout drink as it delivers a lot of energy without the sugar of many other energy drinks. However, it’s important to note that this coffee is very finely ground, so it may be better used in espresso makers or coffee machines with a filter. 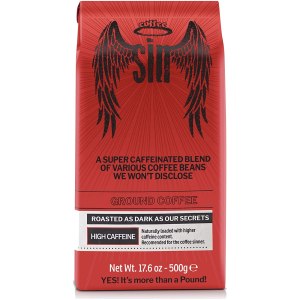 Although less popular than Death Wish Coffee, Biohazard Ground Coffee has phenomenal reviews. One reviewer even went as far as to say this coffee is like “a kick to the face.” While that might not seem like a good thing, it is when you’re looking for an energy boost. Biohazard Ground Coffee boasts 928 mg per 16 ounces of coffee. Note that this is less than the coffees discussed earlier in this article as it’s measured by a 16-ounce cup rather than a 12 ounce one. However, this coffee does have a significantly higher caffeine content than a normal brew. 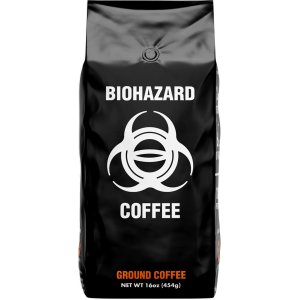 Death Wish Coffee Company has truly made a name for itself. It really popularized the extreme caffeine category of coffee, and as such, it has amassed over 25,000 reviews on Amazon, most of which are five stars. The dark roast gives the coffee a strong taste, but the 728 mg per 12 ounces of coffee really gives it a kick. The blend contains both Arabica and Robusta beans, which are certified USDA Organic and Fair Trade, and is slow roasted for intensity. Death Wish Coffee Company Ground Coffee is best made in a drip coffee maker, and the resulting brew boasts notes of cherry and chocolate. 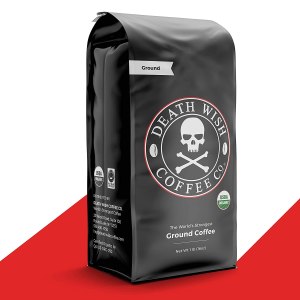 Banned Coffee claims to be the most delicious strong coffee on the market. Of course, that depends on your tastebuds, but the chocolate and berry notes in this brew are intriguing. In addition to being quite tasty, each 18-ounce cup of Banned Coffee has the caffeine equivalent of eight normal cups of coffee. So, if you normally have to drink loads of coffee throughout the day to stay awake, this might be a great option for you. In addition to a variety of preparations, including ground, whole bean and K-Cups, Banned Coffee is also available in pumpkin spice flavor during the autumn. 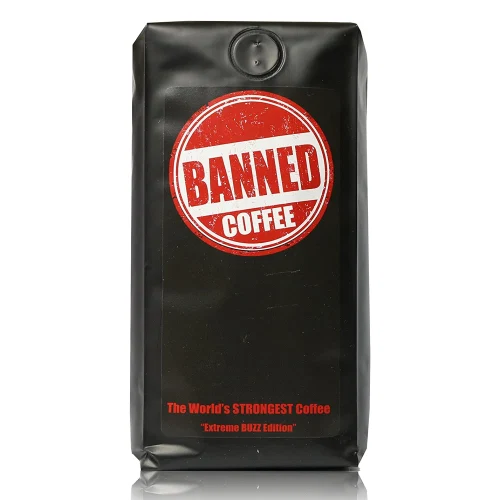