It was May 20, 2020. We were just getting used to quarantine, and the depression was real. We were waking up with nothing to do each and every day. The majority of us were laid-off and happiness was hard to come by.

It couldn’t have come at a better time. New music was sparsely being released due to the pandemic, but of course, Gaga came through when we all needed her the most. The record was an instant distraction amidst all of the noise that we were all going through, a fun way to bop around the house and pretend nothing bad was going on. It had insane features from some of the world’s most prolific music artists like Ariana Grande, BLACKPINK and even Sir Elton John.

All in all, it brought happiness into our bleak, miserable lives, and now it’s doing it again.

How? Through Oreos. Chromatica Oreos.

Yeah, we never thought we’d see it, but almost a year after the album’s release, Lady Gaga has collaborated with Oreo by releasing a Chromatic-themed Oreo for the girls and the gays to enjoy while quarantining. As part of the collaboration, Oreo has also become a sponsor of Gaga’s Born This Way Foundation. 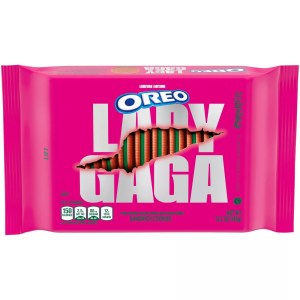 The Chromatica Oreos are brightly colored with two pink cookies and a green filling, which are two colors associated with the dance-pop album. Flavor-wise, they taste almost identical to classic vanilla Oreos. It’s a trendy snack item to buy solely for the fact that you can. Nonetheless, for Little Monsters or Lady Gaga merch collectors, they’re kind of an absolute must-try.

But, here’s the catch: it’s been continuously harder and harder to find them out in the wild due to the gaining popularity the Oreos have attracted on social media platforms such as Twitter and TikTok.

So, where the hell do you even find Chromatica Oreos? Unless you want to make a trip to every single Walmart or Target in a 10-mile radius, we suggest you just snag a couple of containers on the internet. The price is going up as inventory becomes scarcer, but you shouldn’t have to pay more than $12 + delivery to get pink Lady Gaga Oreos of your very own.

For sure, a manhunt for Miss Gaga’s iconic Oreos could be fun, but it’s a total day waster. Lucky for you, the Chromatica Oreos are easy to find and in-stock online at Amazon, Walmart and Target right now for delivery. You’re welcome.

Whether you’re a Gaga fan or you want to get in on the hype, you need to try them for yourself. Like, come on, they’re limited edition — you won’t have the option to do so forever.

Buy Now
Raw or Baked, You Won’t Be Able To Get Enough of These Cookie Doughs