Whiskey of the Week is a new review series on SPY. Each week, we’ll review a different bottle, from newly released small-batch bourbons to our favorite cheap well whiskies.

Black Button has been making whiskey for nearly a decade now, but this might be a bottle that is new to you — it certainly was to me when I got to try it recently. This upstate New York distillery is a grain-to-glass operation, with the grains sourced from local farms with which it has longstanding relationships. It is still very much a craft operation, although Constellation Brands (Casa Noble, High West, Corona) does have a minority stake in the company. A few different types of whiskey are produced at the distillery, including an excellent Empire Rye made with a 94% rye / 6% malted barley mash bill (all grains grown in New York State). But we are going to focus on the Four Grain Bourbon here, a really nice example of a well-made and surprisingly complex young craft whiskey.

The mash bill for this bourbon is 60% corn, 20% wheat, 9% rye, and 11% malted barley. This brings a bit of sweetness and a hint of spice to the palate, which is full of stone fruit, vanilla, and caramel flavors. The nose opens up with a bit of young wood, which is often an indicator of a young whiskey aged in smaller barrels. That is indeed the case here, as the bourbon is just shy of four years old at this point and aged in 30-gallon barrels. The distillery does have a decent amount of 53-gallons aging in the warehouses which should be ready in the not too distant future, likely for a bottled-in-bond release. 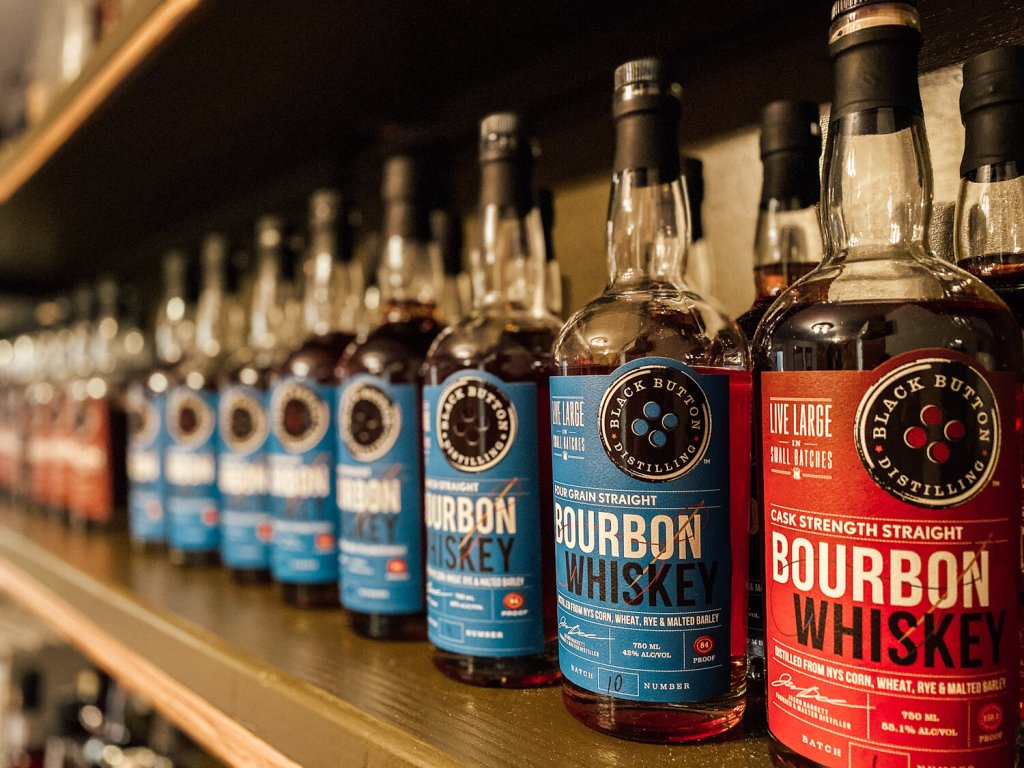 A sip of the bourbon reveals something that really surpasses expectations, and is proof of the careful distillation and maturation methods that founder and master distiller Jason Barrett practices. The whiskey is not chill filtered, so you will see some sediment in the bottle. But that’s just extra flavor, because the chill filtration process might make the whiskey clearer but arguably removes some of its intrinsic character. Barrett says that the warehouses the barrels are aged in have some pretty extreme temperature swings, about 10 degrees per day and 40 degrees per year. So the interaction between wood and whiskey is pretty profound over a shorter period of time than in Kentucky or Scotland.

Try Black Button Four Grain Bourbon in a cocktail like a Boulevardier or a Manhattan, and you’ll be pleased as the flavors can stand up to mixing with different components. But first spend some time sipping and getting to know this tasty New York bourbon on its own.