If you have a fan of the Avengers in your life, then you know that there is no shortage of movies, comic books, video games and toys that are geared towards anyone and everyone who loves this league of extraordinary superheroes. Whether your super fan loves all things Captain Marvel or spends their days pretending they are hanging out with King T’Challa, the Avengers have a superhero for everyone.

Avengers films have been breaking box office records for years and show no sign of slowing down even amidst the ongoing pandemic. The massive list of superheroes boasting membership in the squad means there’s someone that every viewer can identify with, whether they’re saving the world or standing up for their friends. It also means there are plenty of more stories to tell and people to save.

Whether you are looking for a gift for a young Avengers fan who may not be ready to sit through a three-hour movie but still wants to save the world with older siblings, or you need a gift for an adult who has several theories on Quantum Realms and the Nano Gauntlet, we have the toy for you.

Check out our list of the best Avengers toys below when you are taking a break from saving the world.

Help the Avengers fan in your life reenact their favorite scenes and create new storylines with a set of eight superheroes. Safe for ages four and up, the set includes six-inch figurines, including Captain America, Iron Man, Black Panther, Spider-Man, Daredevil, War Machine, the Incredible Hulk and Falcon. Great for kids to play with on their own or in a group, the set makes it easy to let creativity run wild and imagine new and exciting adventures for superheroes to embark upon. 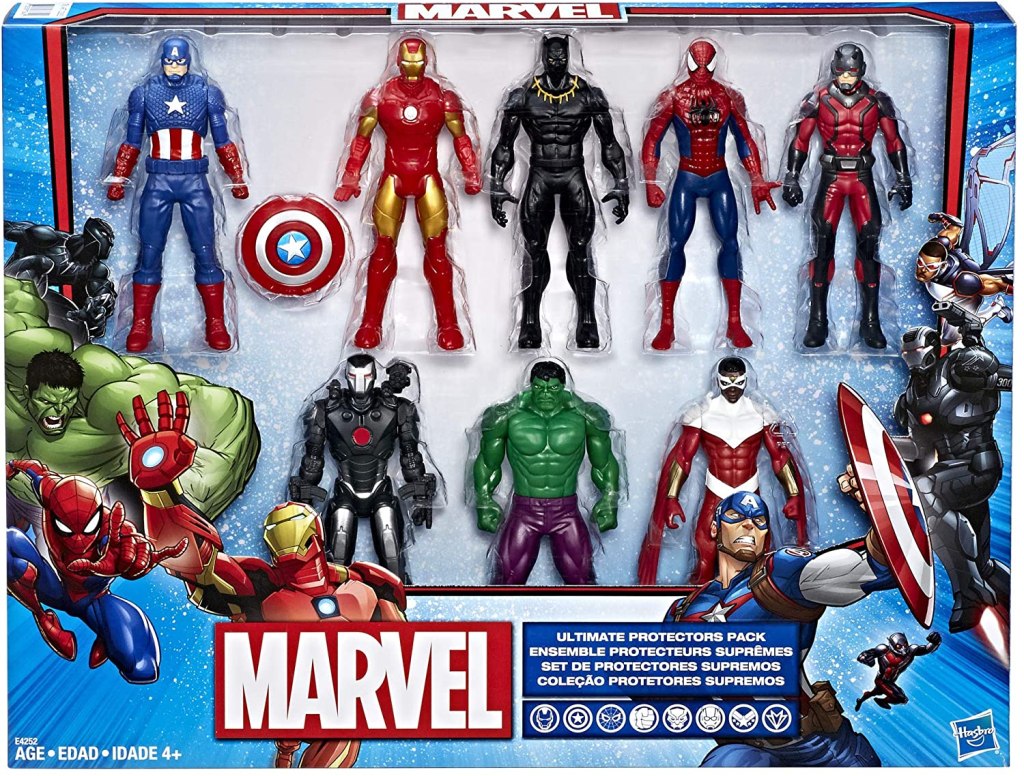 For kids who are excited to role-play as their favorite superhero — (fake) weapons included — Nerf has a line of Avengers gear that is fun and safe to use indoors and outdoors. Kids must first build their blaster using the pieces included in the set before getting to experience what it’s like to be their favorite superhero. The Nerf blaster can be connected with the other blasters in the set to create supersized units that are ready for a very gentle Infinity War. 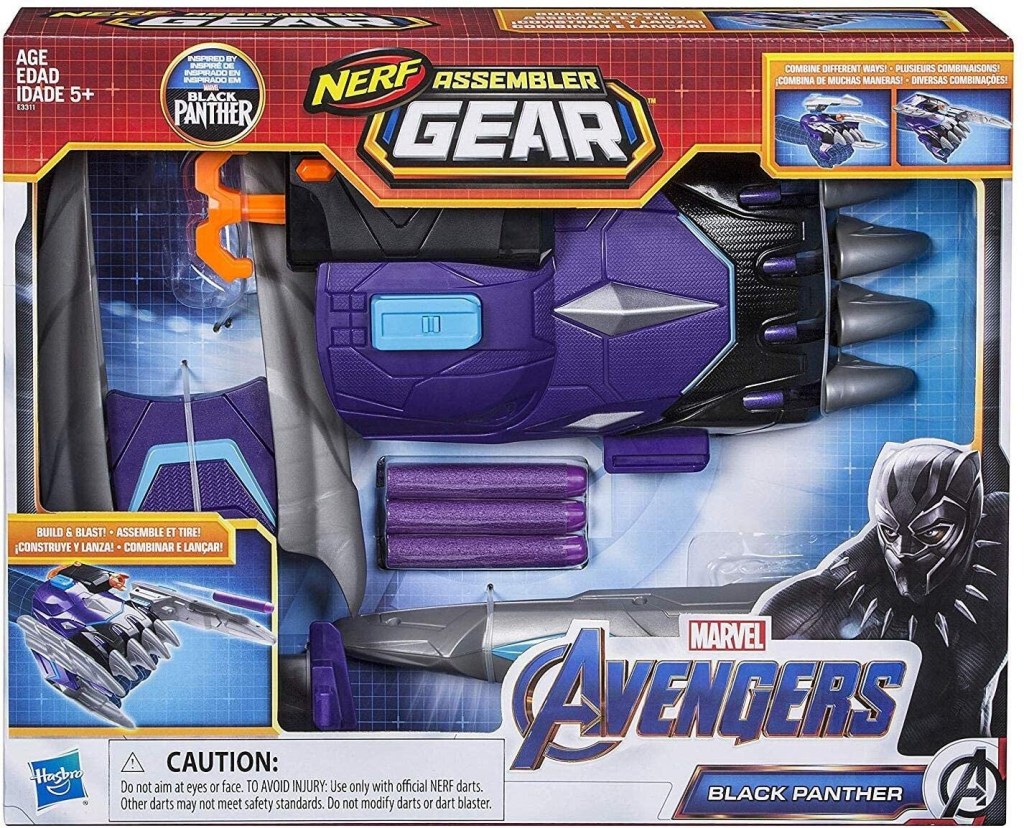 Add some STEM learning to your child’s toy selection with the Avengers Hero Inventor Kit by littleBits. The set comes with the pieces and tools needed for kids to build their own interactive superhero gauntlet (ie. arm controller). By following the in-app tutorials and videos, kids learn how to program their gauntlet to make different Avengers sound effects and create their own. Combining tech, engineering and math, kids will not only learn how to code, but they can also build their gauntlet by adding additional items found from around the home for a truly customized toy. 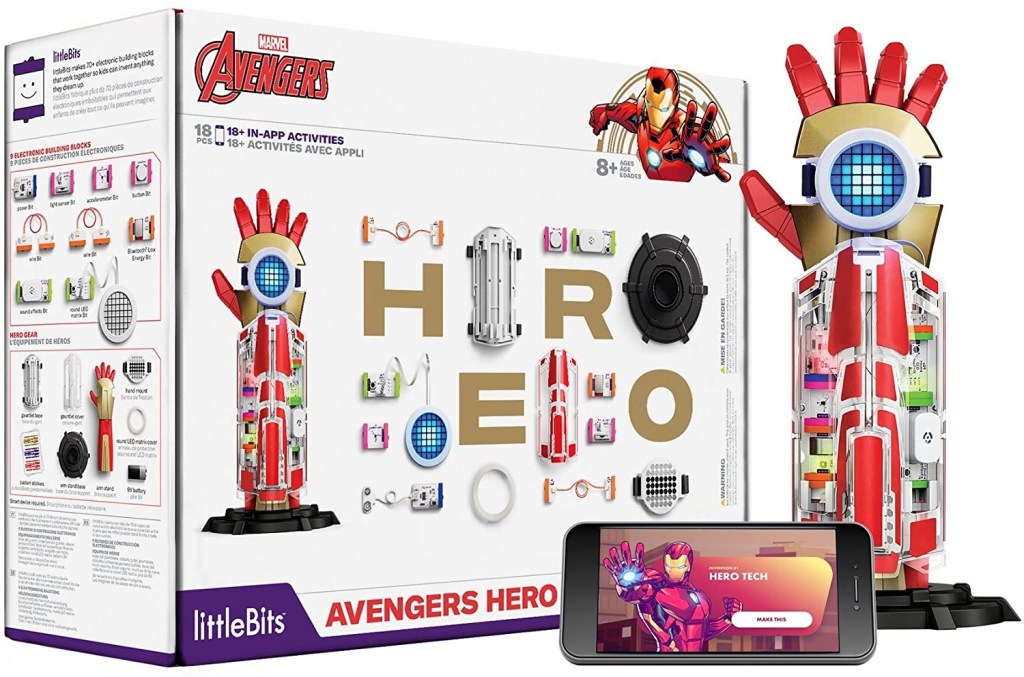 For older kids who are excited to build their own Avenger collectible set, we love the funky and accurate Funko Pop! figures. Each collectible can be bought individually and is designed on top of a rocky base that fits perfectly with the other five collectibles available in the Avengers collection. Fans can choose from Captain America, Black Widow, Iron Man, The Hulk, Thor and Hawkeye. 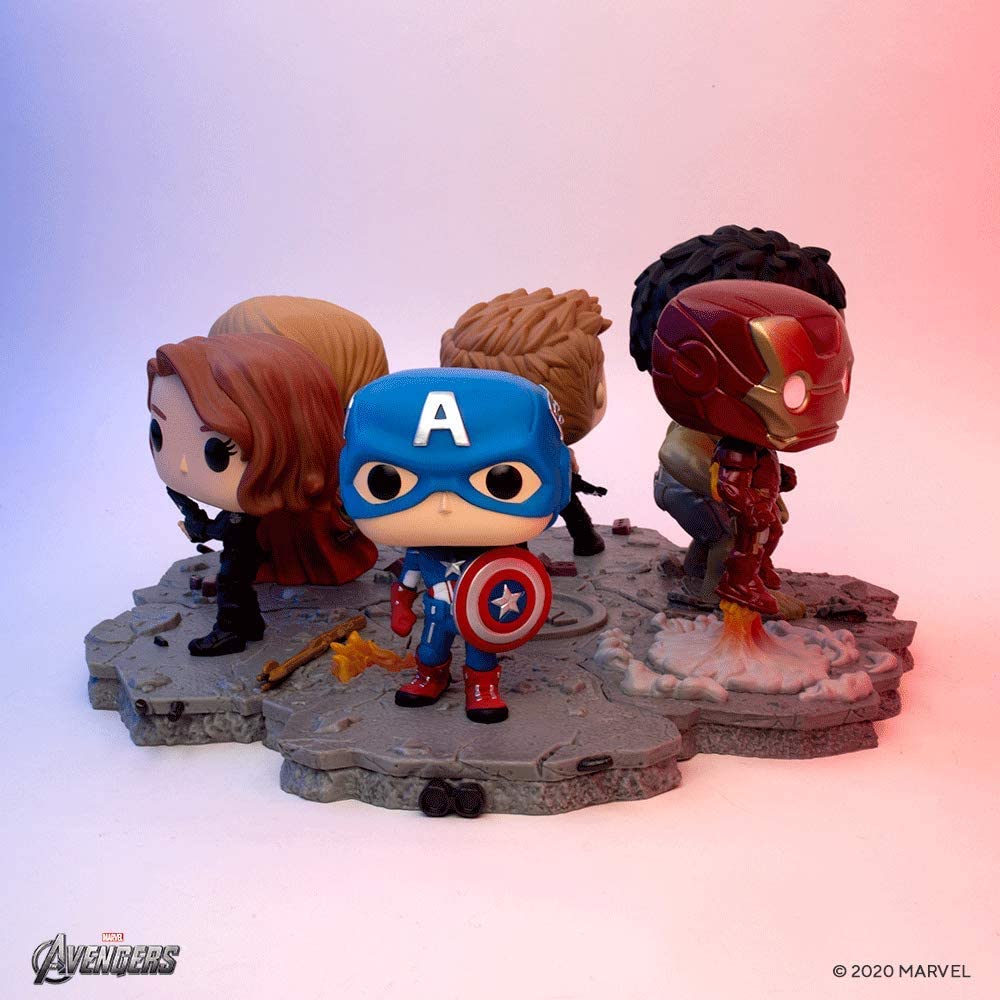 There is no shortage of amazing LEGO sets that are perfect for Avengers fans and one of our favorites is the Iron Man Hall of Armor. Appropriate for ages seven and up, the set has 524 pieces, including five Iron Man mini-figures and everything kids need to build Tony Stark’s Hall of Armor. The set is in-depth enough to be played with on its own or used in addition to other LEGO Avenger sets. Sarcastic comebacks aren’t included, but Iron Man fans will likely be able to add their own. 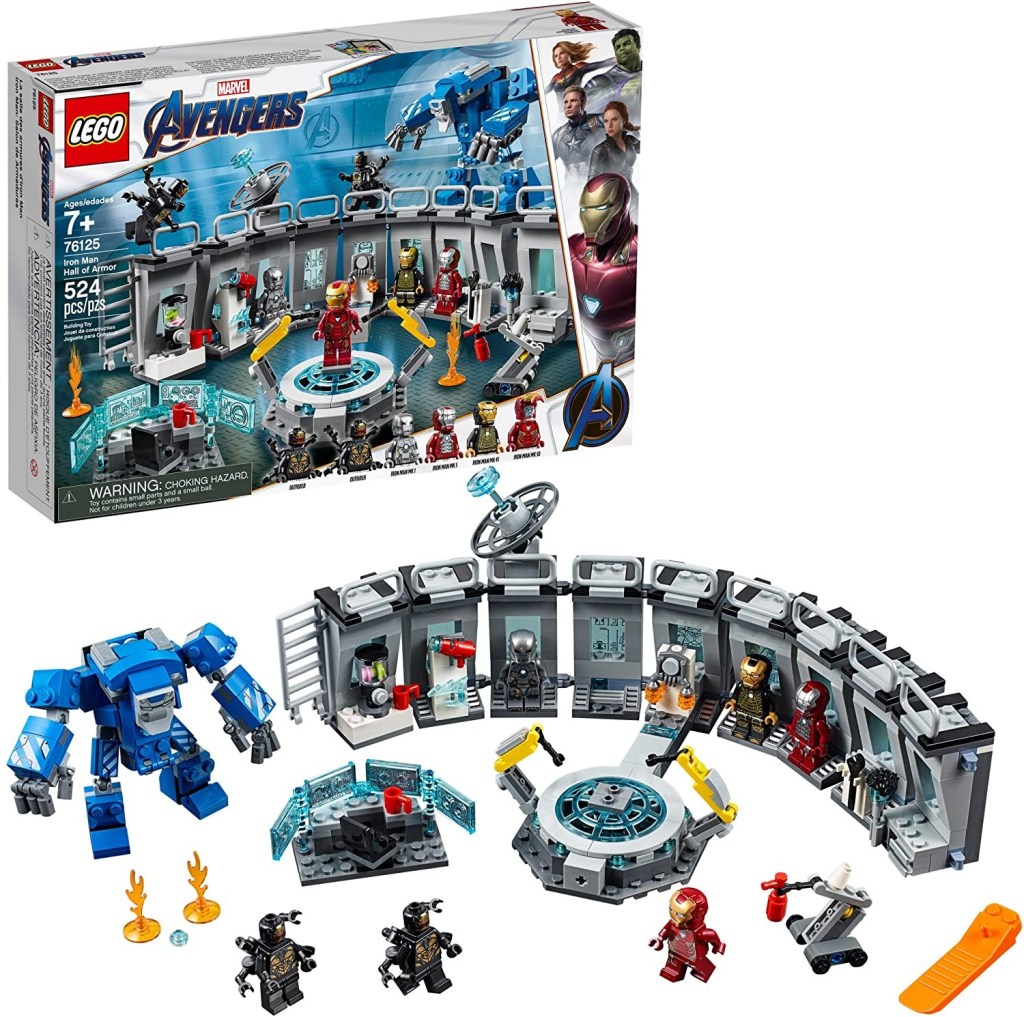 6. Wonder Forge Marvel I Can Do That! Game

Getting kids to sit still and play a board game that can take hours is a mission no superhero parent wants to embark upon. That’s why we like the Wonder Forge Marvel I Can Do That! Game. Designed for players ages three and up, the game can be played by four participants, has easy to follow instructions, and includes several challenges that have physical obstacles. The game includes a Spiderman’s web, Thor’s hammer, Captain America’s shield, Captain Marvel’s energy ball and can be played in 15 minutes. Now that’s how you successfully finish a mission. 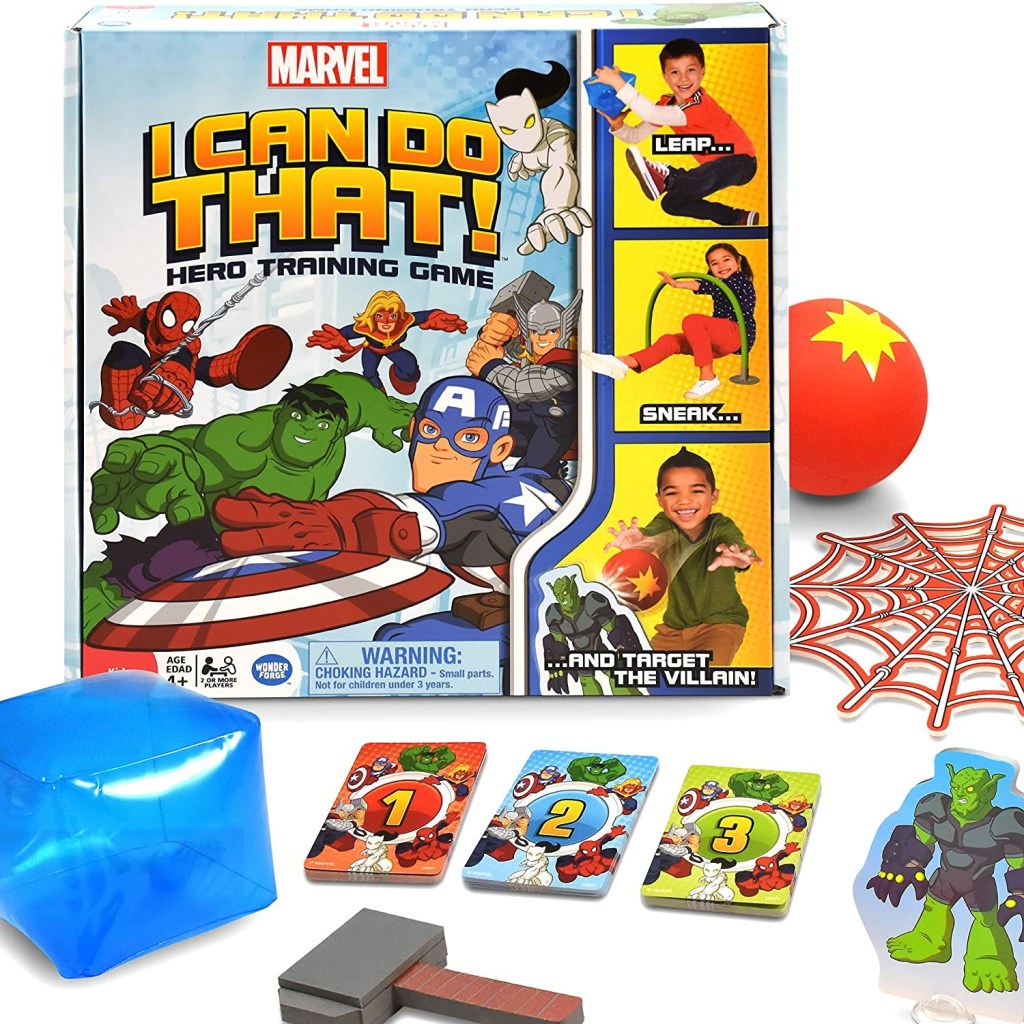 Wonder Forge Marvel I Can Do That! Game

Dressing up as your favorite superhero is fun no matter how old you are (adults, we mean you too), but spending money on elaborate costumes for young kids can feel wasteful since they will quickly outgrow the item. That’s why we like the Marvel Superhero Capes, a set of reversible capes and masks that fit children of any size. The basic costumes are perfect for role-playing and are ideal for group play dates or parties, giving everyone the chance to be their favorite superhero. 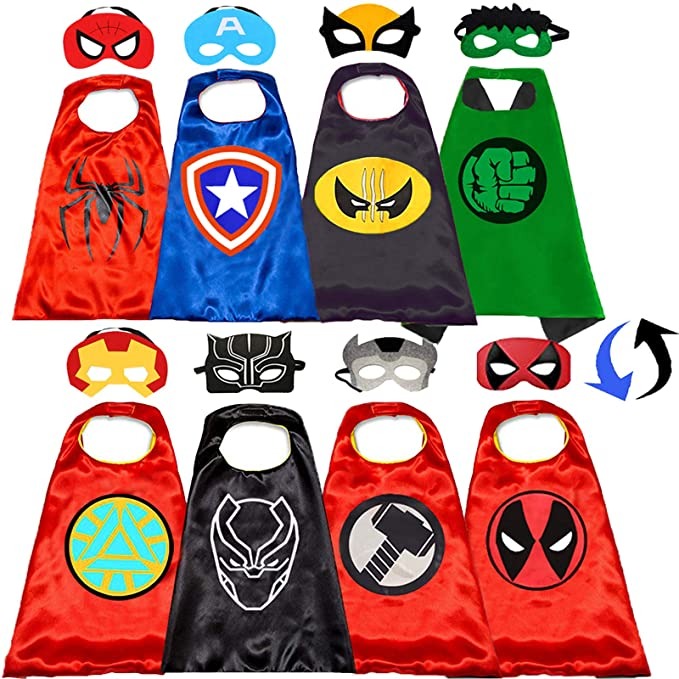 BEST FOR INDOOR AND OUTDOOR PLAY

Walkie-talkies continue to be one of the best toys for kids thanks to their versatility. They can be used indoors and outdoors, with two children or in groups, and with models designed for young kids, like the eKids Avengers Endgame FRS Walkie Talkies, they are user-friendly and appropriate for various age levels. Avengers fans will love that the walkie-talkies are branded and come with special sound effects that mimic noises from the films. The walkie talkies can also alter the user’s voice to sound like an Avenger hero and they have special light effects. Parents will love that their child will stop asking for a smartphone for at least 10 minutes. 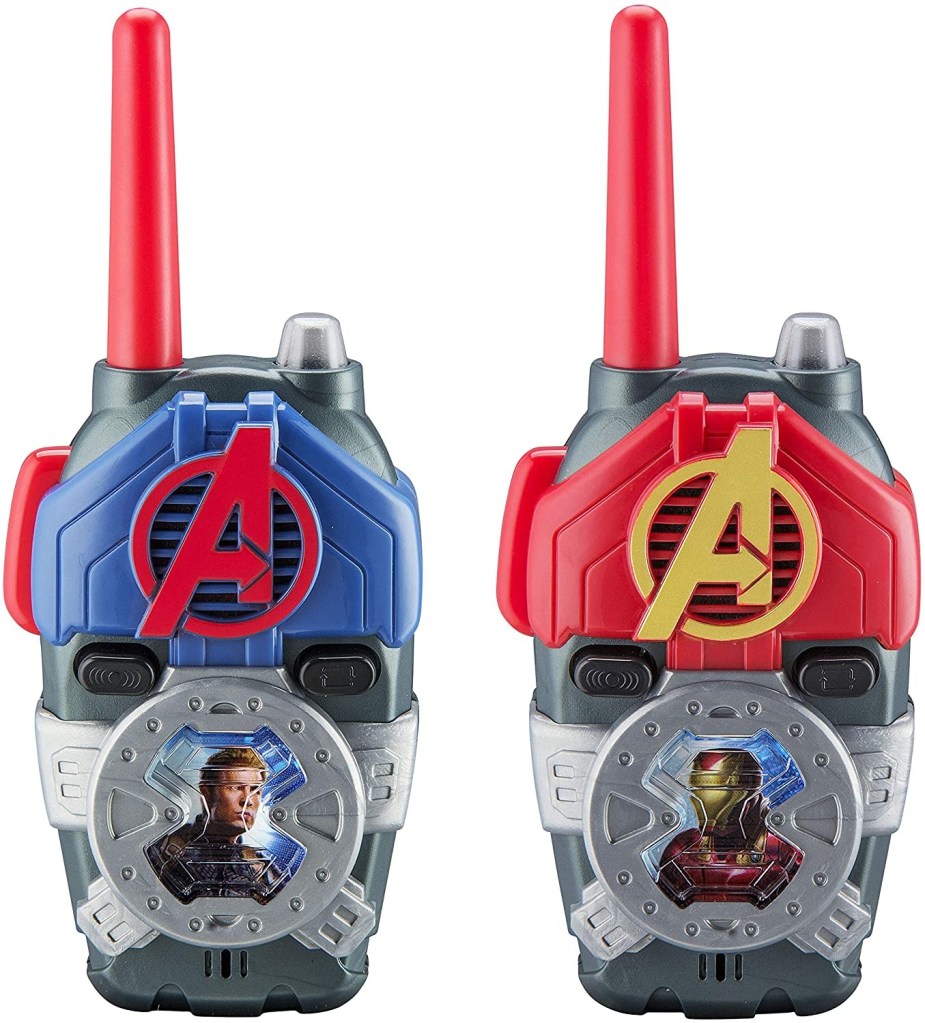 Of course, it’s fun to buy toys for kids, but what about toys for adults? That is still very, very fun. For grown-up fans of Avengers, Marvel Legends Series Endgame Power Gauntlet is worth the splurge. The ultimate in Avengers role-playing items, the Gauntlet pulsates with glowing lights when activated, showing that the user holds the power of the universe in their hand. In addition to the glowing infinity stones, the Gauntlet also has realistic sound effects from the Avengers films. We always thought that Thanos was really misunderstood. 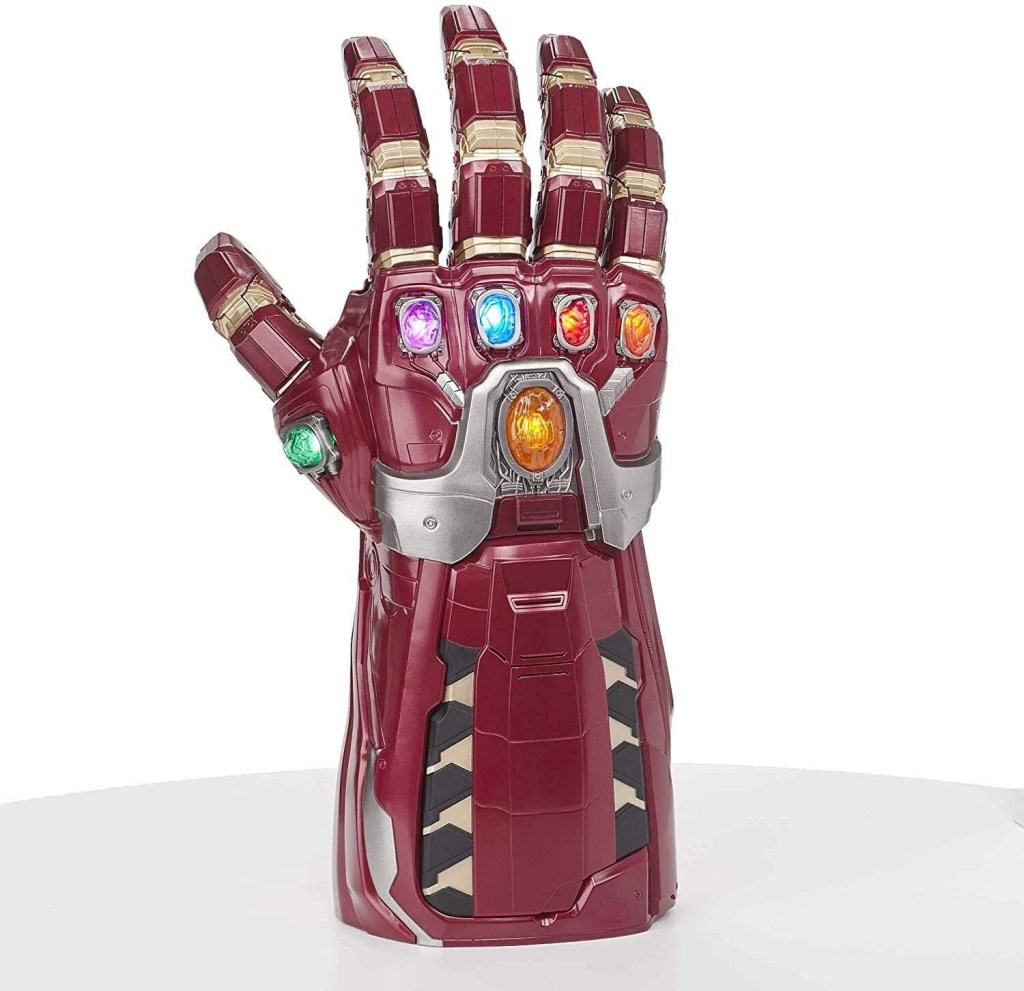 Disney+ is quickly becoming the go-to destination for all things Avengers. In December 2020, Marvel studio head Kevin Feige announced a slew of new TV series and films coming to the streaming service directly from the Marvel universe, including several Avengers titles. WandaVision is set to arrive in January 2021 followed by The Falcon and The Winter Soldier series in March. The series Loki will pick up after the events of Avengers: Endgame in May 2021. Ant-Man and She-Hulk series will soon be arriving and while the Black Widow stand-alone film is still slated to open in theaters in 2021, we wouldn’t be surprised if the film followed in the footsteps of other blockbusters and did a day-and-date release between theaters and Disney+. 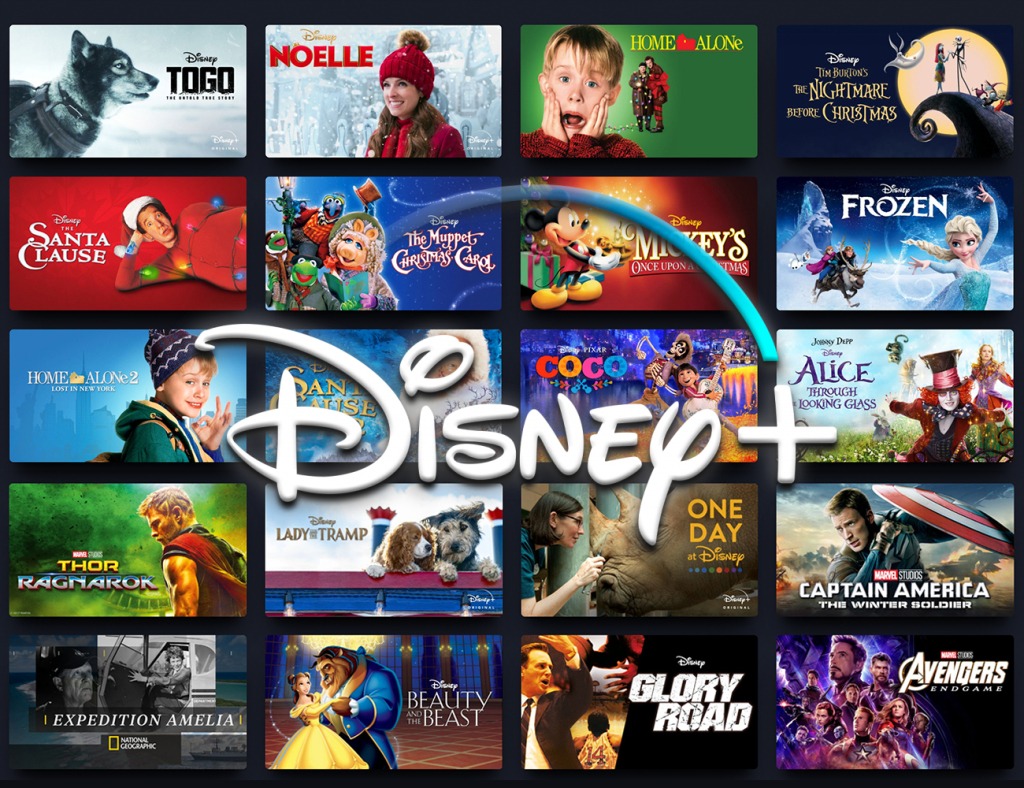 These Marvel Toys and Gifts are More Popular Than Ever Thanks to the Success of Avengers: Endgame