Space is always up there doing space things, but recently it feels like it’s been especially omnipresent in the news. With NASA’s Perseverance rover touching down on Mars and sending us never-before-seen footage of the planet’s surface, to SpaceX planning a billionaire-funded trip to outer space within the next few years, space is on everyone’s minds. The collaboration between government agencies and private space exploration companies has never been in as full of force, and we’re getting closer and closer with each day to planets that, all of a sudden, don’t seem so far, far away. Did you know there’s even a hotel project being launched on MARS this year? True story. However you feel about space travel this innovation is exciting, and you can easily support your favorite governmental aeronautical agency with the best NASA merch.

We’ve written about t-shirts for space nerds as well as space-themed dishware on the site before, but there’s something special about NASA’s logo and all the history it represents. When I gaze upon it, I’m instantly transported back to my sixth grade classroom where we learned all about the planets, history of the U.S’s many space stations and the historic moon landing. NASA has accomplished some pretty incredible feats in its 60+ year history, and we want to help you celebrate that.

Whether you’re a space lover yourself or prefer to have two feet firmly planted on earth at all times, I’ve gathered some great NASA merch that’s available for purchase online. Gift a piece or two to a space lover friend of yours or collect some memorabilia you can pass down to your grandkids who will inevitably be living in some space colony 100 years from now. Trippy. I combed Amazon’s selection as well as NASA’s official gear website and found some great finds. Here’s some of the best NASA merch available to buy online in 2021.

We’re going classic with the first pick, because you can’t go wrong with a solid long sleeve t-shirt. This shirt has the official NASA logo on it that’ll be instantly recognizable for everyone who sees it. It’s lightweight and made of pre-shrunk cotton so you shouldn’t lose too many sizes if you put it in the washing machine. This shirt also comes with a variety of other space-themed logos on the front, so take your pick or order more than one! 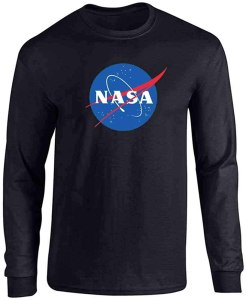 Sometimes, we all need our space. This phrase is going to appear on a few items on this list because I think it’s funny. You’ve also got the NASA logo on there so hopefully everyone who looks at your shirt will get, and appreciate, the joke. It’s made of the blend of cotton and polyester, and comes in men’s, women’s and youth sizes. 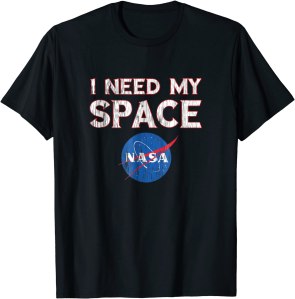 Alpha Industries is a sleek AF streetwear brand that makes tons of NASA merch with authentic logos and killer designs. This Apollo bomber jacket has patches from the mission itself, the space NASA logo as well as the American flag, and the back is adorned with patches from every Apollo mission from that space program. The jacket also has a “Remove Before Flight” red flag, an homage to the uniforms worn by real astronauts, and is reversible and water resistant. 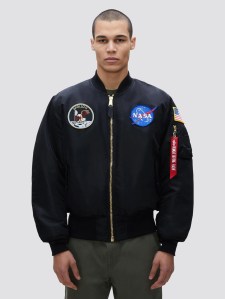 We’ll never forget you, Pluto. Show your support for the runt of the solar system litter with this funny, 70’s retro t-shirt. It comes in a wide variety of colors but I think the logo pops the most over a black background. If you’re old enough to remember when Pluto was a planet, you should get this t-shirt. If you care about other people remembering Pluto, get it for them. We must all band together to make sure no one ever, ever forgets. 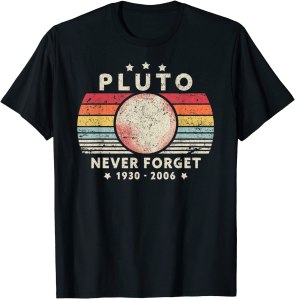 Show your support for one of the only constant things in space, our space shuttle. This design is officially licensed from NASA so you know it’s legit, and the colors pop over the grey background. This is a unisex shirt so it works for anyone and everyone, and it comes with bonus NASA stickers you can put on anything to show your support. 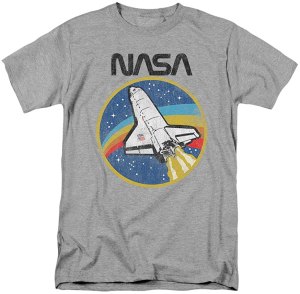 6. INTO THE AM Astronaut T-Shirt

Okay so this isn’t official NASA merch, but it’s a super cool astronaut design that’s great for any space lover out there. It’s made with a super comfortable cotton blend, and the bright neon colors stand out amidst the black background. It doesn’t rain in space, ever, but we’ll let the inaccuracies slide for the killer aesthetic. 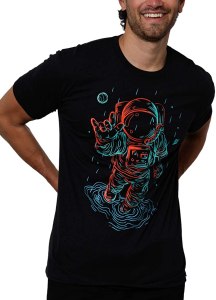 This NASA jacket was worn by the NASA media crew as they covered the DM-2’s historic flight from America up into outer space. It’s a poly poplin shell with a slip fit and a zip-up front, kind of a bomber design, and includes authentic NASA patches that’ll make you look super legit. The jacket also has internal chest pockets for storing your critical space tools so you’ll always have them on hand, just in case. 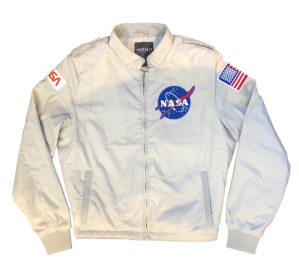 This is a simpler approach, but a great piece of NASA merch nonetheless. It comes in a wide range of blacks, greys, blues and whites so you’ve got your pick from a neutral color palette. If you’re all about subtlety, this t-shirt is a great choice. 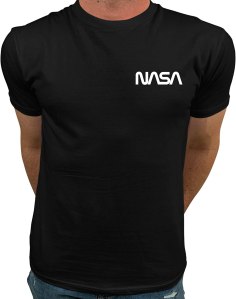 You can never have too many socks, and these socks were designed by the infamous astronaut Buzz Aldrin. This is an officially-licensed NASA product, and feature the NASA logo, NASA script logo, as well as Buzz Aldrin original designs of the space shuttle, flag planting, etc. They’re made of super strong polyester and spandex fabric, and come in sizes 9-11. 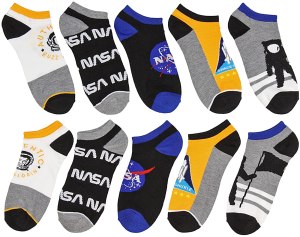 One small step for man… how about a bunch of steps across Abbey Road? This clever t-shirt replaces the Beatles with astronauts and I love it. Legends replacing legends, if you ask me! The design is very well done and the NASA space logo adds a nice touch. The t-shirt is designed to be lightweight with a classic fit, and is a perfect gift for a music/space lover in your life. 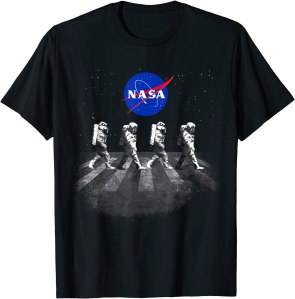 Who knew Buzz liked socks so much? This is another one of his designs, this time they’re crew socks that extend much further up the calf than the no-shows included above. The pack comes with two pairs, one blue and one grey, each one featuring a different NASA logo. Did you know NASA has two logos? The text one and the space one. Go figure! 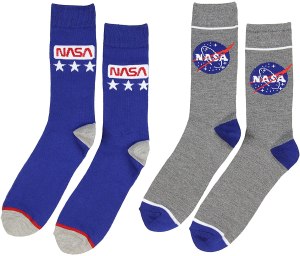 Celebrate the momentous triumphs of the NASA space shuttle team that include 135 completed missions and a lasting legacy with this smartwatch band. It includes a NASA logo on the outside as well as a USA flag on the inside. The band is made to work with Apple Watch Series 1-6 as well as SE, and with Samsung watches that have a 22mm pin. It fits all mankind via the adjustable sizing, and is made with high-quality sweat and UV-resistant silicone. 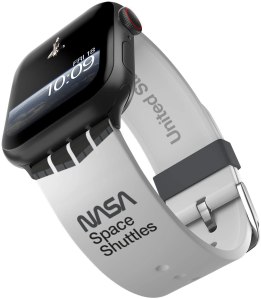 If you’re a college student in need of a super dope lanyard for your ID or have keys that need something to hold them, this lanyard will do the trick. The lanyard itself is adorned with the NASA space logo and stars, and it comes with a space shuttle charm at the end so no one will doubt how much of a space nerd you are. Nor should they! It’s also breakaway so you don’t have to worry about getting caught on something, as the lanyard is designed for a quick release when needed. 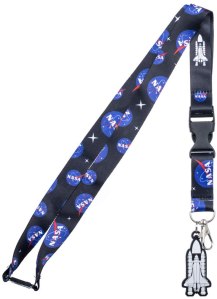 This insulated travel mug is good for both space, as it promotes NASA, and the earth, as it saves you from having to use single-use coffee cups. The outside design was printed using eco-friendly, plant-based inks and is powder-coated with BPA-free material. Plus, the “I Need My Space” phrase strikes again, and looks excellent on top of the celestial background, next to the NASA logo. 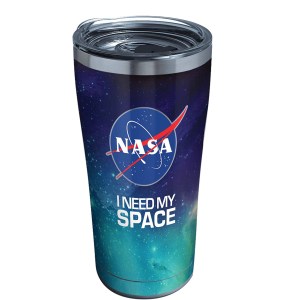 Okay, this one’s a little nerdy but I’m obsessed. It’s right out of that show the “Magic School Bus” with Miss Frizzle, isn’t it? Each tab accompanies a page that explains the planet with a quick summary, and provides easy organization of your notes. Whether you’re studying astronomy or just want to express your love of space as you make your grocery lists, this NASA-themed journal is perfect. 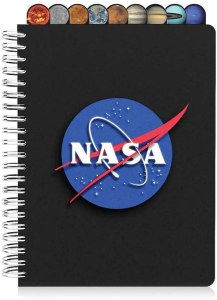 NASA mission patches are some of the OG pieces of space merch, each one commemorating a different outer space mission. This puzzle commemorates that in 1,000 beautiful pieces. The graphic includes patches of all kinds from the administration including their space logo, the Apollo 11 launch, Apollo 13 and more. The puzzle was made using a precision cutting technique that’s designed to ensure a perfect fit for all pieces, and it’s officially-licensed so it’s perfect for a memorabilia collection. 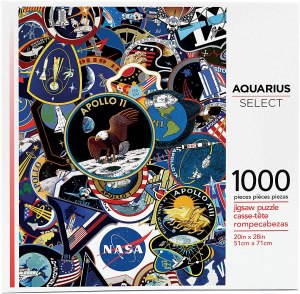 This one’s a simpler piece of merch with a classic design and appeal. The NASA space logo has been professionally printed on both sides, and at 12 ounces it has the perfect capacity for a morning jolt or afternoon boost of your caffeine of choice. It’s microwave and dishwasher safe, and is an eco-friendly choice for preserving your favorite planet in the galaxy. 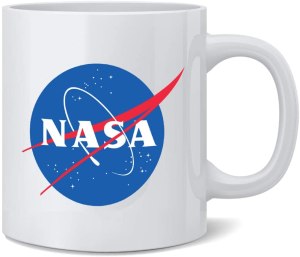 This is a cool piece of NASA gear, and it comes directly from their official merch shop. This Apollo 13 medallion was made to commemorate 50 years since the incredible flight, and is made from metal that flew in space with the astronauts. If you’re a serious space nerd, you must grab this for your collection. If you love a space nerd, this gift is a no-brainer.

Wrap yourself up in the celestial body most visible to us on earth, the moon. He’s always been there for us, in our orbit, and we have a feeling he’ll be with us for a while. Let him comfort you and warm you up with this blanket made from 100% polyester microfleece. It’s 60 inches in diameter with plenty of room to snuggle, and while it won’t keep you warm in space it’s plenty of insulation for our hospitable temperatures on earth. 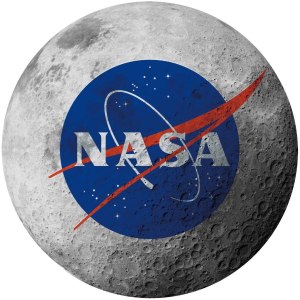 Okay, last “I Need My Space” piece of gear, promise, but this is another great throw blanket that’s perfect for a nerdy space-themed apartment. Blast off as you curl up underneath this cozy space-themed blanket complete with NASA’s logo, a space station and everyone’s favorite punny space phrase. This blanket is made using sublimation printing so the colors are bright and vibrant, and it’s light enough to use all year round. 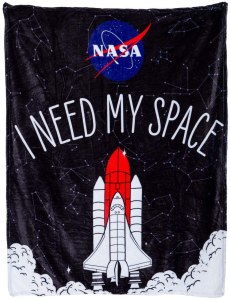 Lastly, we’ve got a few posters, because a picture is worth a thousand words, and probably even more in space. Apollo 15 was another historic mission to the moon and this visual is pretty epic. The rover, satellite dishes and American flag all illustrate the power of these moments spent in space, and make me excited for more breakthrough moments to come. This is a great visual reminder of the greatness that is NASA, straight from their in-house gear shop. 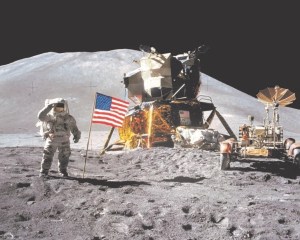 It still blows my mind every time I see a shuttle like this one on a launch pad, to think that soon it’ll be in space. It’s an unimaginable feat in terms of science and aeronautical technology, and this stunning image is a reminder of that excellence. It’s a 16″ x 20″ poster, and perfect for adorning the walls of your at-home office, library or space-themed rec room. 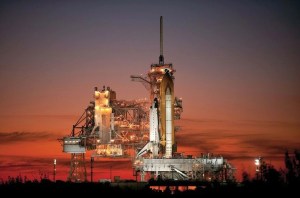 We Can’t Stop Daydreaming About These 15 Epic Treehouse Rentals