While it may have waned for some time before Disney’s acquisition, the Force is stronger than ever now. Star Wars is back, not just in the form of feature films but in made-for-TV miniseries, animated series, books and computer games. Given this popularity, it’s little wonder that Star Wars gifts remain at the top of lots of children’s (and adults’) wish lists.

What’s great about the best Star Wars toys is that they come in every shape and size, and for every budget, too. If you want the biggest and baddest LEGO set centered around your favorite Star Wars vehicles and scenes, you’ve got it. Want extensive dress-up options for every occasion and political stance? Those exist, too. In short, if you can dream it, it’s likely there’s a Star Wars toy made of it. To get your creative juices flowing, here’s a selection of some of our favorite Star Wars toy ideas:

If that small selection of Star Wars-inspired toys has got you excited and ready to add to your friend’s or kid’s Star Wars toy collection, scroll down and check out the best 17 Star Wars toys we found on Amazon. May the fun be with you!

No matter whether you prefer the original trilogy, the newest set or think Star Wars hit its peak during Episodes I, II and III, one thing all Star Wars fans can agree on is how awesome lightsabers are. And, there’s none more so than Luke Skywalker’s iconic green saber. This Star Wars: The Black Series Luke Skywalker Force FX Lightsaber gets you as close as technologically possible to wielding the legendary weapon. It comes complete with realistic light effects, including extending and retracting, as well as sound effects and a stand for displaying this collection-worthy piece. 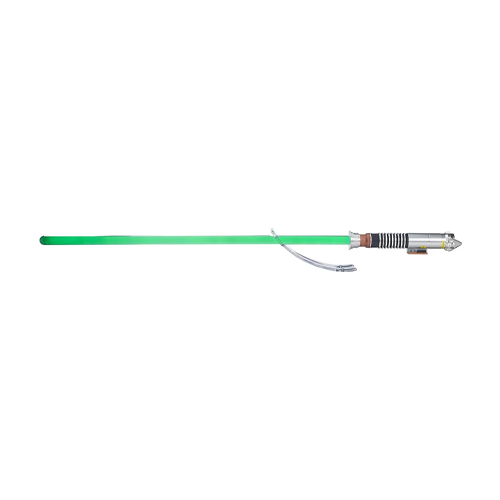 From Rei to Finn and Kylo to Captain Phasma, this Star Wars Stickers Variety Pack features all your favorite characters from The Last Jedi, Rogue One and much of the Star Wars Universe. The pack includes over 900 colorful stickers which are an ideal gift for kids who love to cover their belongings in things they love or even adults who do the same. Additionally, this budget-friendly variety pack makes a great party favor or stocking stuffer idea for every Star Wars lover. 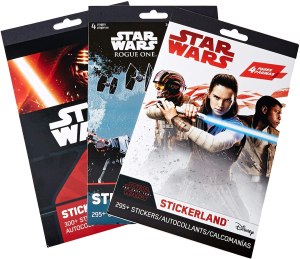 The eKids Star Wars Kylo Ren & First Order Trooper Walkie Talkies are an ideal toy addition for kids who love to play out their own Star Wars-inspired imaginings. The set includes one Kylo Ren (hooded) and one red first order trooper-adorned walkie talkie. They allow for static-free, extended range communication both indoors and out, so your kids can fulfill the battle between good and evil. 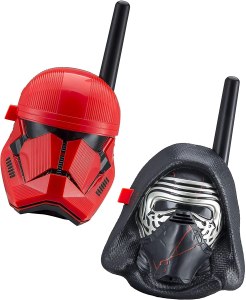 If your kids love diecast model cars, they’re going to love taking to the skies with this Hot Wheels First Order TIE Fighter vs. Millennium Falcon Starship. Inspired by the vehicles from Star Wars: The Force Awakens, you’ll be able to recreate some of the most iconic scenes from the movie or come up with your very own instead. You’ll also find two flight navigators which allow for near hands-free control of the models and double up as handy display stands. 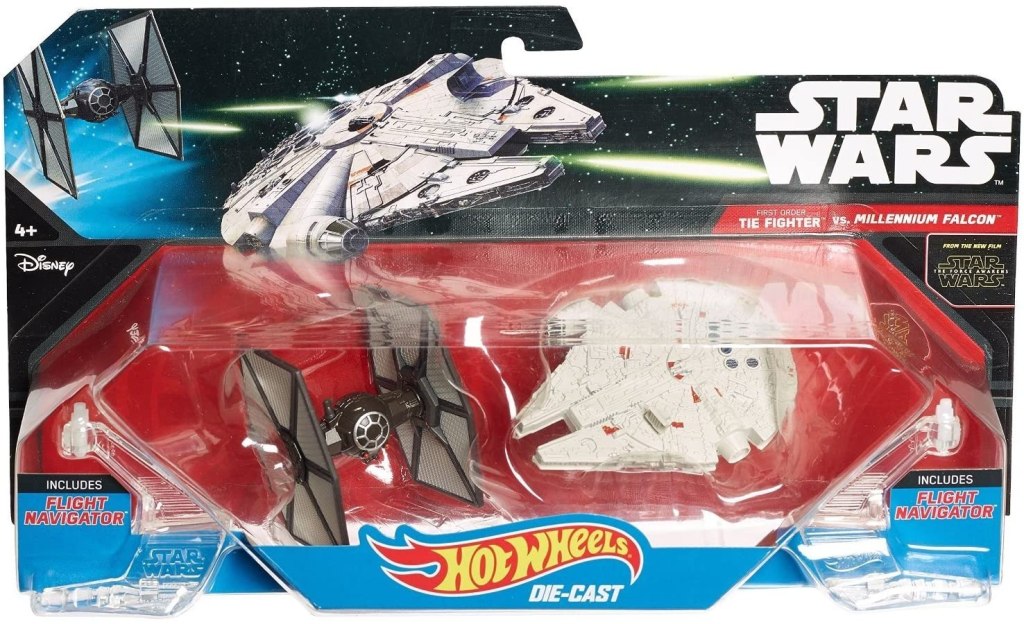 The SOOFUN 3D Illusion Star Wars Night Lights are a great way to deliver a comfortable light level for sleep, while also promoting Star Wars-inspired dreams. The three-piece set includes lights of the Death Star, R2-D2 and Darth Vader himself. Once you’ve installed the shaped panel you want into the slot, you can rotate through the 16 different colors with either the built-in button or accompanying remote control. 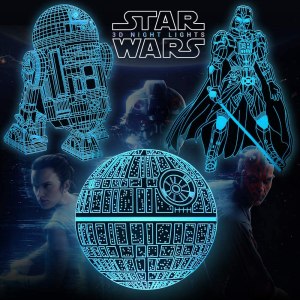 In a film as legendary as Star Wars: The Empire Strikes Back, it’s difficult to become a memorable character. Yet somehow, for only being on screen for a matter of minutes, the wampa achieved this goal and then some. Celebrate this cave-dwelling creature’s achievements with this impressively reviewed Funko Pop! Deluxe Star Wars Wampa Figure. The figure looks just like the creature you remember from the film, although it was seemingly crafted before Luke decided to chop off one of its arms. Furthermore, if this particular Funko Pop doesn’t speak to you, it’s worth checking out the hundreds of other Star Wars alternatives available. 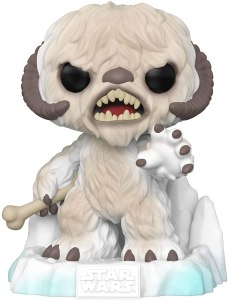 Luke! Leia! Han! Chewie! You’re all here! Yep, that’s right. Inside this Star Wars Celebrate The Saga Toys Rebel Alliance Figure Set, you’ll find everyone’s favorite foursome from the original trilogy as well as everyone’s favorite droid, too. Luke is adorned in his Jedi knight outfit from the final installment, while Han Solo is wearing his outfit from Bespin in The Empire Strikes Back. Leia is made up as she was in the Hoth planet scenes. This is a great gift for kids and collectors alike. 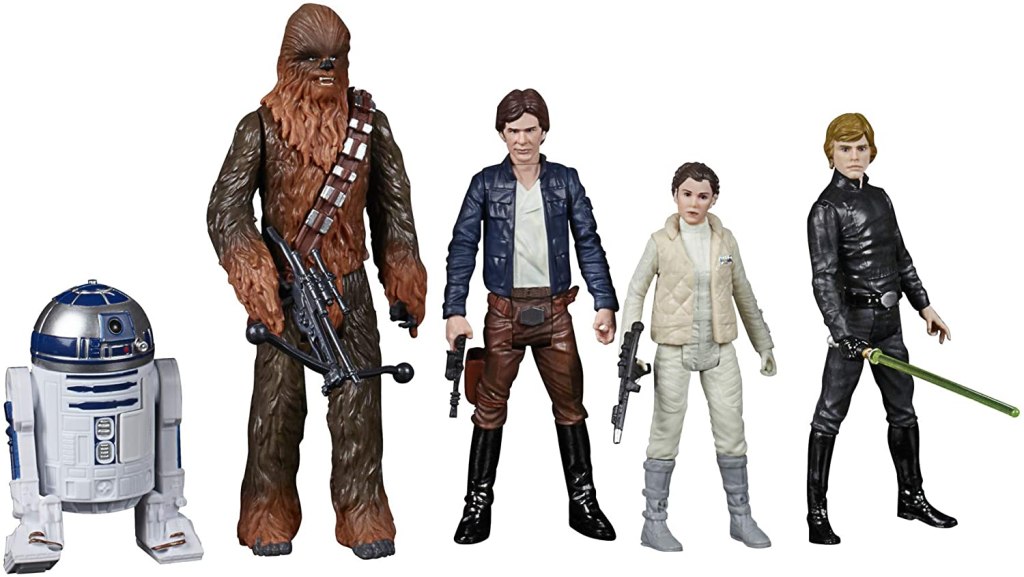 If the slightly hefty price of the Force FX lightsaber is a little out of your budget, it’s still possible to enjoy lightsaber-based fun with the Star Wars: The Last Jedi Bladebuilders Kylo Ren Electronic Lightsaber. Based on Kylo Ren’s awesome and unique lightsaber from the latest trilogy, this customizable toy comes with both the lightsaber and a light dagger as well as a connector and instructions for how to adapt your lightsaber. Furthermore, the movie-accurate appearance is accompanied by sounds and lights for an even more realistic look and feel. 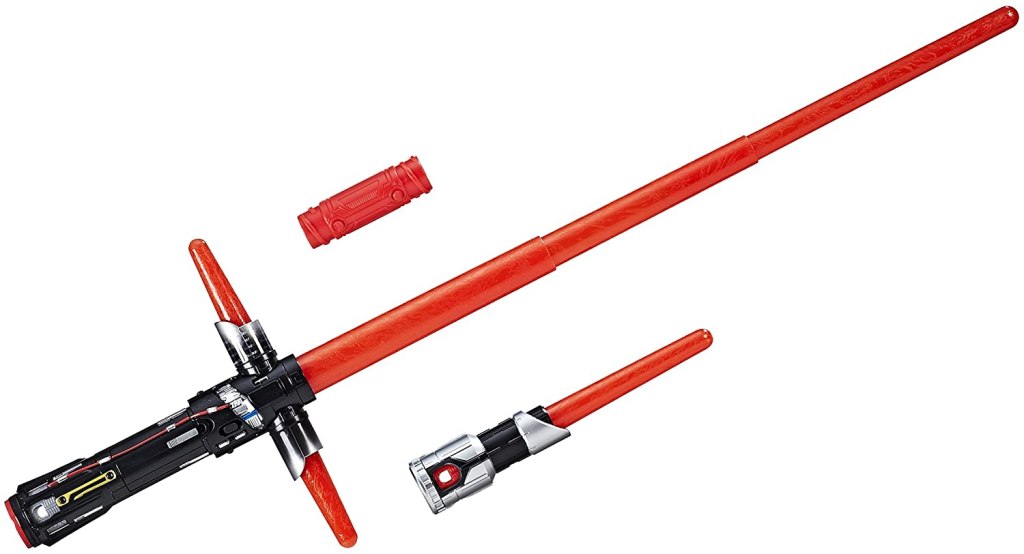 Mando is fast becoming one of the most popular figures in the Star Wars universe, so it’s little wonder that this Star Wars The Vintage Collection The Mandalorian Toy is so loved by fans. Shielded by beskar armor and wearing his iconic T-visor mask, this vintage, 3.75-inch tall figure is great fun to play with or even just display. The figure comes with an accompanying pistol and long-range rifle for added options both in play and display. Furthermore, there are other characters from the TV show available to add to your collection, or you could try a fun crossover using figures from other films in the series. 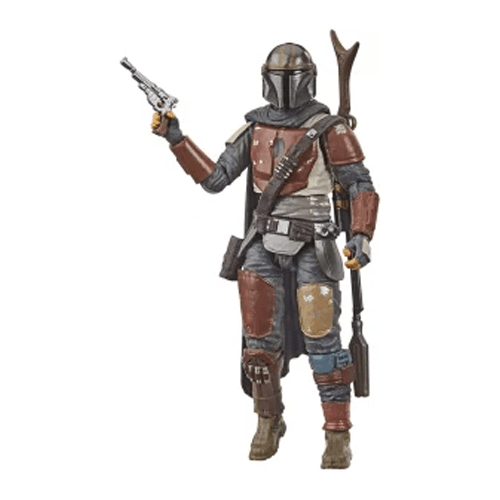 If function is at the top of your wish list for your Star Wars toys, you’ll definitely want to consider the Tervis Star Wars Celebration Insulated Tumbler. The double-walled design is capable of keeping cold drinks cold for up to 24 hours and hot drinks hot for eight. The high-quality and well-reviewed tumbler is also leak resistant and sports an easy, open-and-close lid for added convenience. 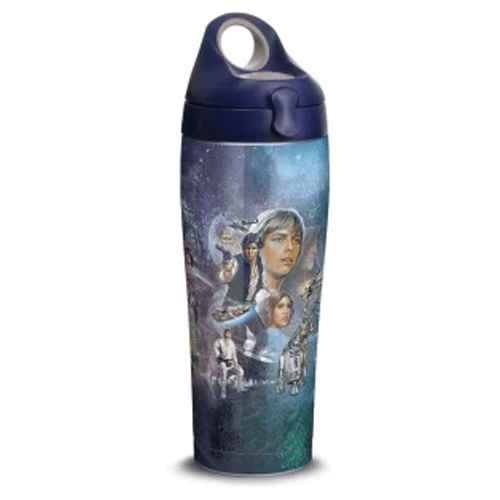 Always be the one to shoot first with this Star Wars Rogue One Nerf Imperial Death Trooper Deluxe Blaster. Styled on the weapons used throughout Rogue One, this high-quality, battery-powered blaster comes with three glow-in-the-dark darts which can be fired one after another. In addition, the weapon features GlowStrike technology, providing light effects and laser blast sound effects. 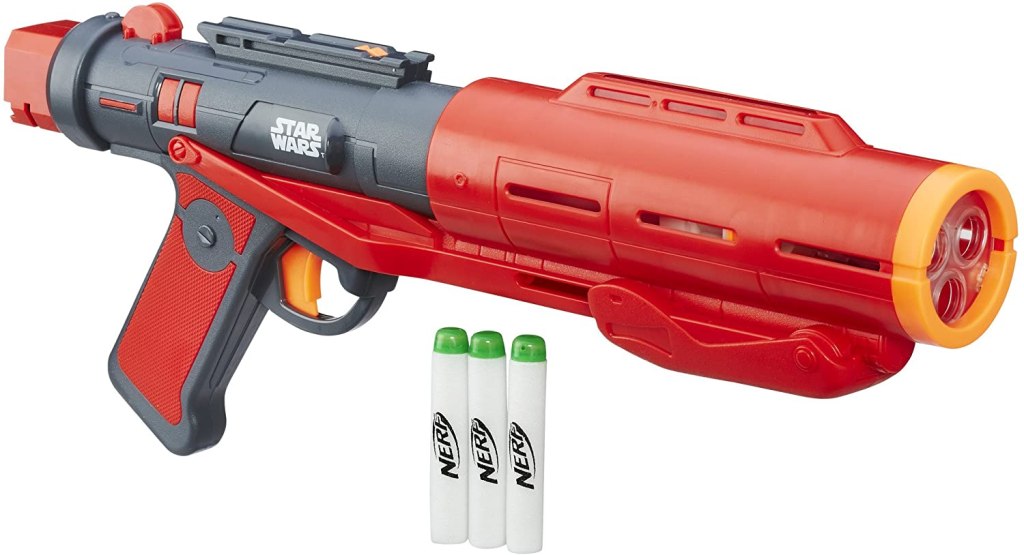 Baby Yoda, or Grogu, depending on how many of the episodes from The Mandalorian you’ve seen, is undoubtedly the stand out star of the Star Wars universe in recent years. In this Star Wars The Child Talking Plush Toy, you’ll have both a fun plush to cuddle up to as well as a fun toy to reenact some of your favorite scenes from the episodic series. Plus, given Grogu’s tendency to try and eat everything in sight, it only seems fitting that this plush is accompanied by a delicious frog, which he is certainly partial to. 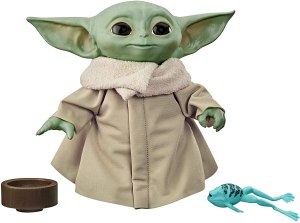 Not every child grows up wanting to be a Jedi. Some may prefer the order and discipline of the Galactic Empire and therefore would find dressing up as a servant of the Emperor and Supreme Leader in this Star Wars Stormtrooper Costume preferable. This authentic Disney costume includes a Stormtrooper bodysuit, helmet mask, detachable belt and shoulder pauldrons, giving the outfit a much more high-quality feel than competing one-piece options. Try pairing this costume with a blaster to complete the overall look. 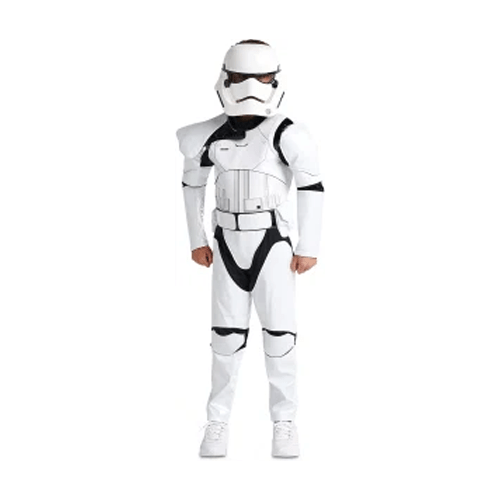 The LEGO Star Wars Anakin’s Podracer Building Kit is one of our favorite Star Wars LEGO pieces. While some would say not too much good came out of Star Wars: The Phantom Menace, others would argue that the very invention of pod racing alone was worth the mess. In this 279-piece kit, you’ll get to recreate Anakin’s pod racer, which includes details like an open cockpit, extending flaps and sizable engines. The set also includes three minifigures in the form of young Anakin himself, Padme Amidala from the film and a 20th anniversary Luke Skywalker. This is a great gift for any true Star Wars lover. 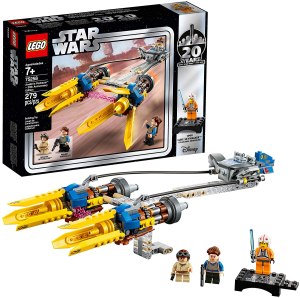 The Star Wars Droid Inventor Kit is an innovative “edutainment” style Star Wars toy. Great for curious kids, it offers programmable settings and a variety of different possible end products, letting you really “invent” your droid. This set is a great way to introduce kids into the world of coding and includes over 20 different missions in the accompanying smartphone app for kids to work through. The kid-friendly kit also includes step-by-step instructions and all the pieces required to get your droid moving (minus the smartphone for the app). 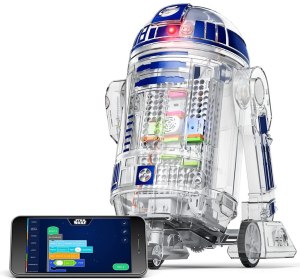 For kids or adults looking to recreate extensive scenes from the most recent Star Wars trilogy, check out the Star Wars Force Link BB-8 2-in-1 Mega Playset. When closed up, the set is shaped just like BB-8 from the series. However, when opened, you’ll discover a four-tiered playset which is made up of six individual areas, including the detention block, trash compactor and tracking room. The set also incorporates Wear Force Link technology for unlocking sounds and comes supplied with two figures in the form of Supreme Leader Snoke and an elite guard. 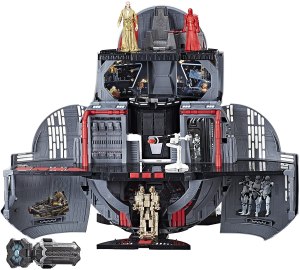 If you’ve already mastered the popular Millennium Falcon LEGO kit, or are simply more inclined to things on the Dark Side, this LEGO Star Wars Imperial Star Destroyer Building Kit could be for you. Released in 2020, this comprehensive model is based on the instantly recognizable Star Destroyer from the original trilogy. It’s made up of an impressive 4,784 pieces and includes fun details, such as a scale version of the Tantive IV (the ship from the opening of Star Wars: A New Hope and end of Rogue One), swiveling guns, a tilting radar dish and two imperial staff members to man your ship. 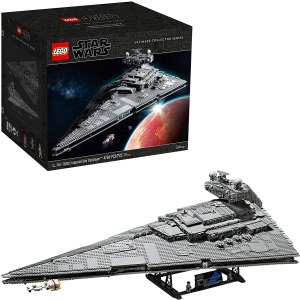