Oh the stocking stuffer. A Christmas tradition that is devilishly tough to do right. It’s one thing to get a gift, but an entirely different battle all together when that gift has to be small enough to fit in a stocking. Sure, you could go with cash or a gift card, but do you really want to be the one who phoned it in again? No, we didn’t think so.

Luckily, we’re here to help. We’ve rounded up a handful of unique, fun gifts that almost everyone will enjoy unwrapping this holiday season — and will actually use throughout the year. So instead of tearing your hair out trying to stuff a stocking with a handful of throwaway items, check out our recommendations below.

Never underestimate the amount of power in a small package. Two speakers in one package, the Wonderboom from Ultimate Ears is capable of producing a shocking large sound that provides rich, clear and crisp audio via Bluetooth connection. And since it’s 100% waterproof you toss in the water without every getting concerned (seriously, it’ll even float!). And with 10 hours of playback on a single charge, that’s more than enough power to keep the party rolling all day long. 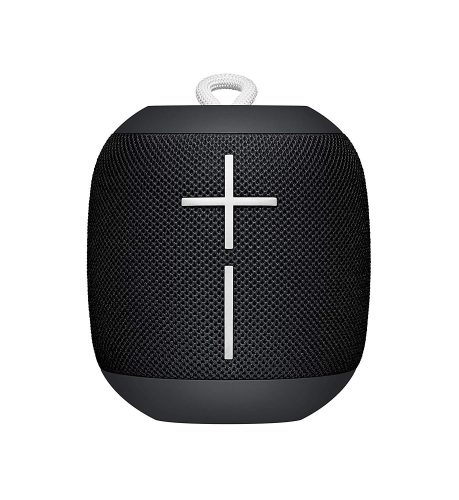 As Guardians of the Galaxy will tell you, we’re all losers, especially in the sense that we lose stuff. And while we all know one that one person that seemingly can never find anything, there’s a way to ease that frustration: Tile. Capable of being used to find any number of frequently lost items (keys, phone, wallet, and more) a simple Bluetooth tracker helps keep your sanity. The pro version has a replaceable battery so your giftee won’t need to buy a whole new device when it’s on its last legs. What’s more, this one is water-resistant, durable and louder than before — making it a compelling purchase even if they’re the most organized person in the world.

Sure, you’ve heard of BOYB, but have you heard of BOYC? With the Carry on Cocktail kit, your giftee will have everything they need to turn the unrefined and sometimes chaotic experience of flying into something that’s a lot more palatable. Each kit has all the tools to craft a premium cocktail while up in the air. And with several different options to accommodate everyone’s personal favorite drink, they’re great to keep on hand for the hotel minibar should they be so inclined. Overall, it’ll be sure to make flying a little easier—or at least a little bit more fun. 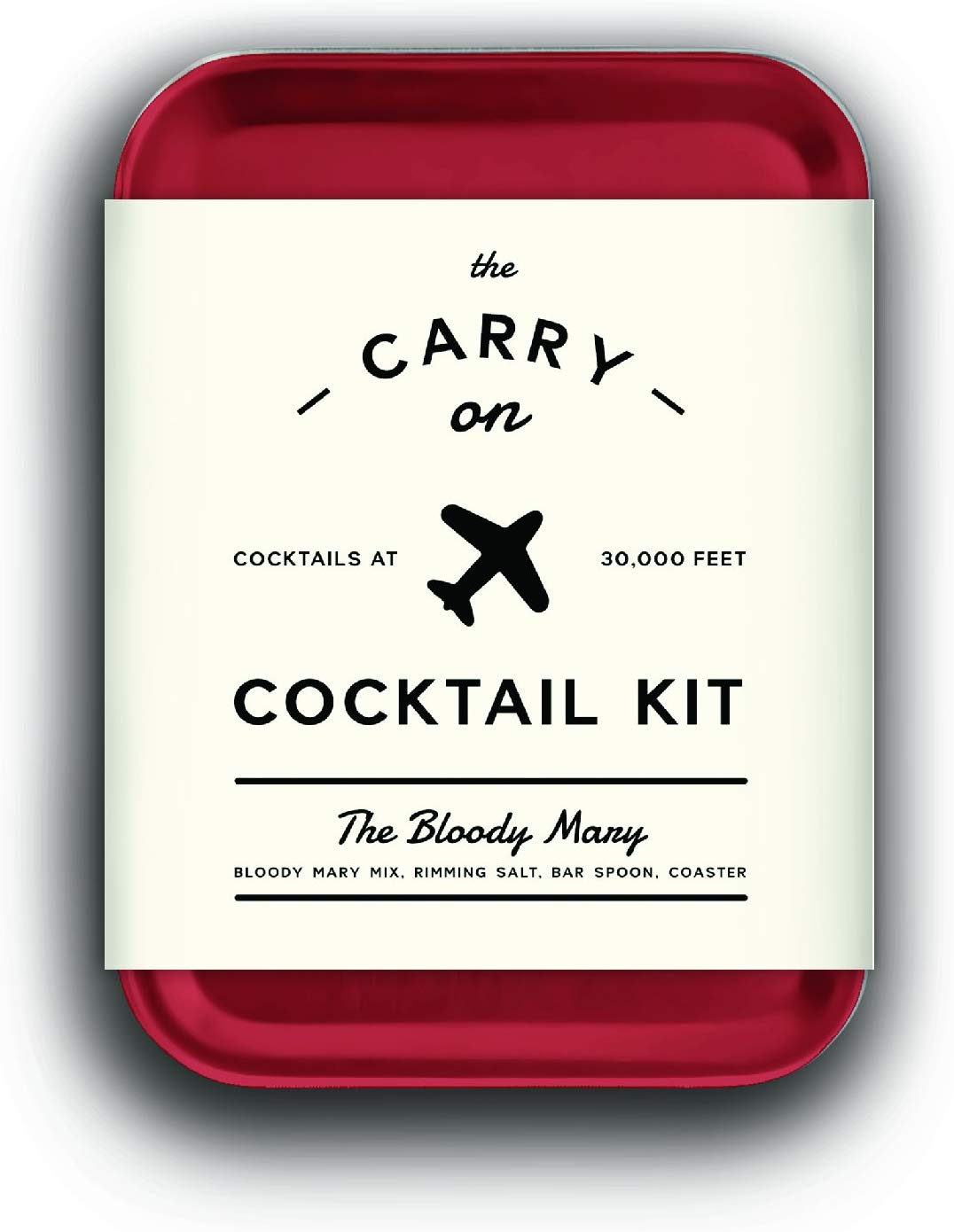 If you know someone that hasn’t bought a quality phone mount for their vehicle, it’s time to introduce them to the wonder that’s the WizGear phone mount. By slipping this mount into the air vent in a car, it quickly provides a safe and secure position by which to use helpful car applications like Google or Apple Maps without having to look away from the road. The other nice feature about the WizGear mount is that it can quickly swivel the display depending upon the preferred method of use. 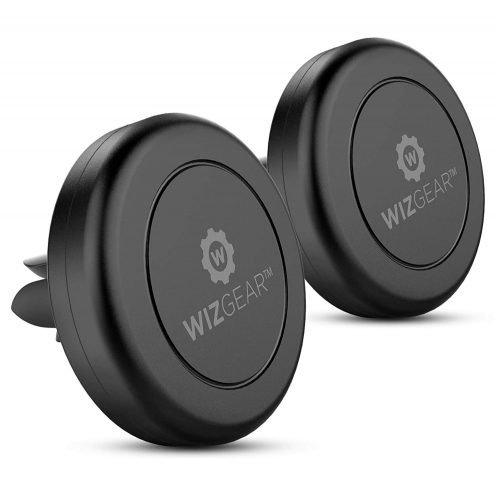 The thing with tech gifts is that it’s difficult to buy something that’s stocking stuffer worthy without it costing an arm and a leg. There’s an easy solution though: a portable charger. While it’s not the sexiest gift for techies, a portable charger like this one from Anker makes perfect sense for those friends or family members that are constantly on their devices or on the go. Being prepared always helps and having a quick and easy charging solution is a gift they’ll continue to use again and again and again. 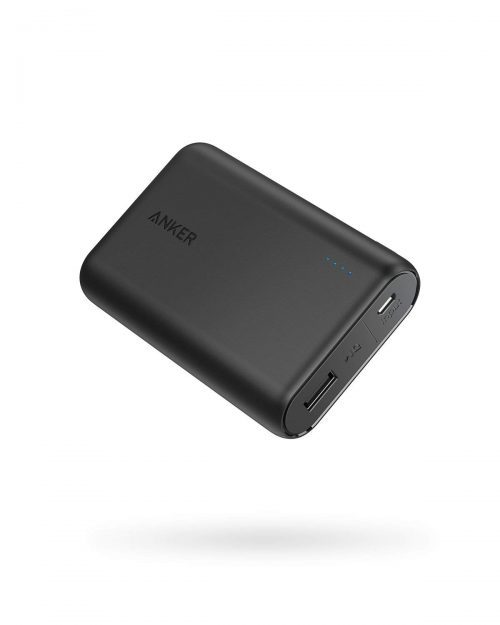 Let’s face it, we all yearn for our homes when we’re away from them. Each of those places has their own unique energy and feeling that’s hard to capture when someone isn’t there—but that doesn’t mean we can’t try to recapture that feeling. Homesick Candles are the closest thing out there to bottling up the scent and vibes of a particular place and bringing it along elsewhere. With a unique scent for most major cities in the United States, there’s more than likely a candle for everyone. Just take this New York City candle for example, as it evokes notes of Central Park, luxury department stores, and that concrete jungle where dreams are made of. And with approximately 60-80 hours of burn time, there’s plenty of smell to go around. 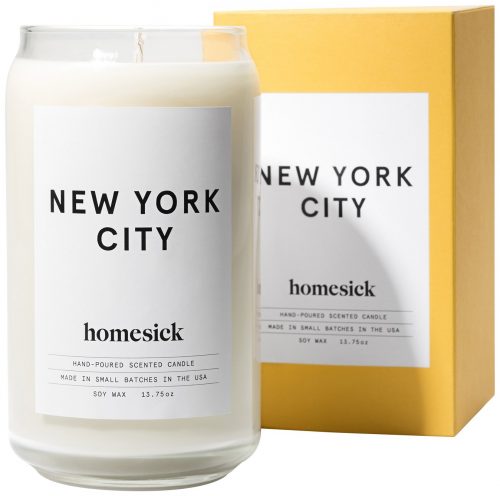 Quality water bottles are a dime a dozen these days, but bottles with built-in water filtration are less common, which makes this superlative version from Brita particularly handy. As one of the most trusted names in water filtration, the 26 oz water bottle will actually filter water as you drink it, ensuring the water inside it is safe and clean to drink. With its rounded bottom, it’ll fit nicely into most car cup holders, making it easy to carry around from home to work and back again.

The same company behind one of the most comfortable mattresses in the world has reinvented the travel pillow. Lovingly called the Nap Pillow, Casper’s take is nearly silk-like in its construction, softly cradling the head. The microfibers nestled inside the 100% cotton plain weave shell allow for air to move through the pillow, which allows for cool comfort while it’s in use. Plus, with its included travel bag, it’s easy to carry around for wherever a nap needs to be taken. 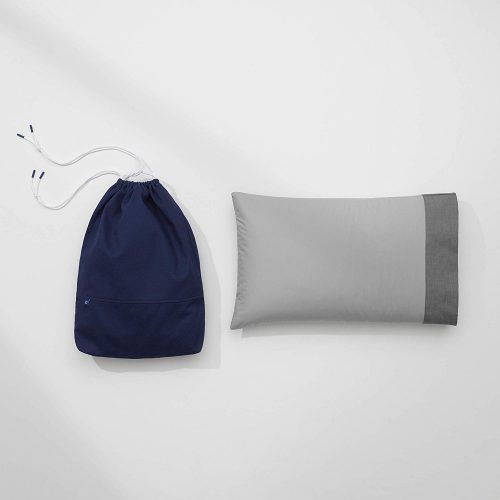 A gift that, quite literally, keeps on giving, the Polaroid Zip Wireless printer is great for that friend or family member that’s a constant shutterbug. Capable of connecting to any smart phone via Bluetooth, you can instantly print any digital photo, making the intangible into something tangible. The two-inch by three-inch prints include sticky peel-back paper so they can slap them anywhere they’d like. Plus, it’s small enough to fit into their jacket with ease, which means it’ll quickly become an essential part of their night out. 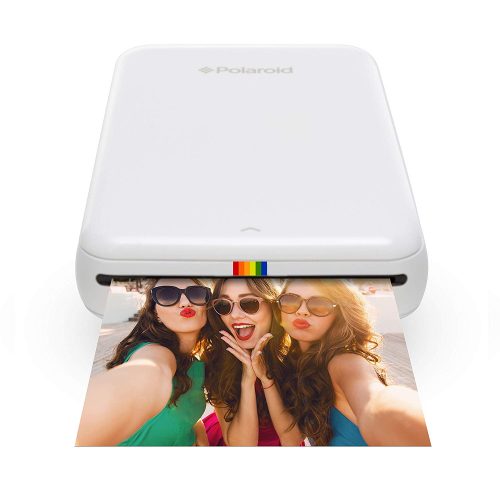 What Do You Meme? is similar to that of other adult card games (i.e., Cards Against Humanity) in which you have a topic card and other cards to find the most humorous pairing. The spin here is that the game brings the online world of memes, offline, allowing everyone to pair their favorites with a prompt to create some hilarious results. It’s a perfect gift for someone that loves to throw a good party or the game-obsessed person in your life. 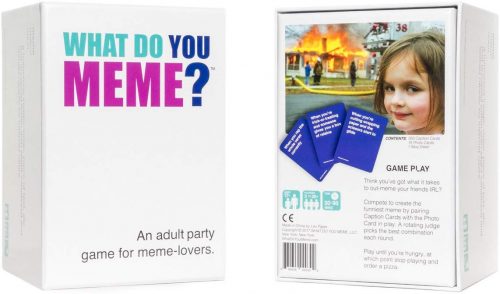 When you have a product as beautiful and as elegant as an Apple Watch, it’s absolutely deserving of its own special place in your home. This is why this Apple Watch stand makes a great stuffer for those who are obsessed with their wearable. Crafted from high-quality aluminum, the stand has a place for your giftee to run their charger through, keeping it nice and sung while the Apple Watch clicks into place. From there, it’s easy to toggle the watch over into nightstand mode for a quick bedside view of the time. And since it works with all Apple Watch series, there’s no need to worry about getting the newest version, as compatibility across models won’t be an issue with the stand. 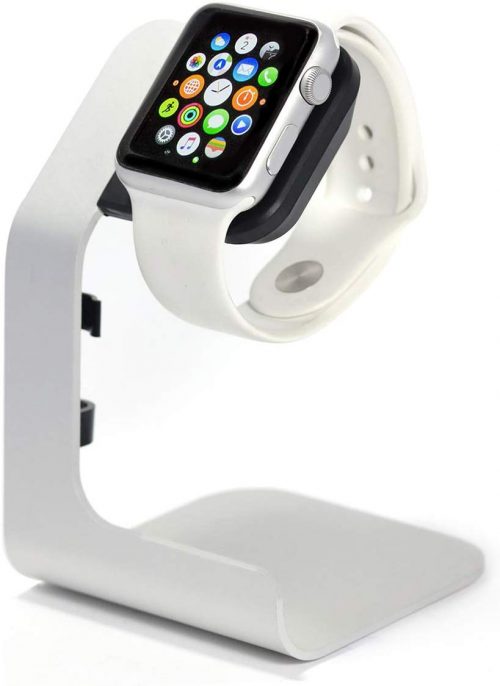 When traveling, it can be unwieldy to keep track of all of various electronic cords. A cord organizer eliminates that issue, placing everything in one convenient place and keeping them neat, and well, organized. This leather rollup case from Barney also has dedicated spaces for a passport, credit card, cash, and whatever else your giftee may need to file away in a safe place. 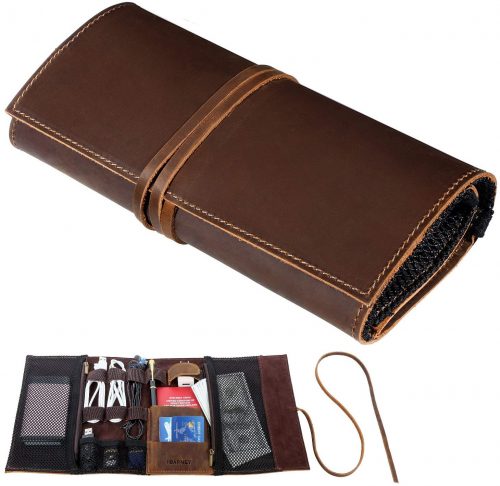 More environmentally friendly—and decidedly cuter—than dryer sheets, these cactus dryer balls from Kikkerland quickly inject a bit of character and fun into the doldrums of doing laundry. The prickly stems of the cactus work in real-time to help better fluff and aerate your giftee’s laundry as it tosses and turns around in the dry, ultimately saving time by cutting down the drying time by as much as 50%. Plus, they’re just super adorable. 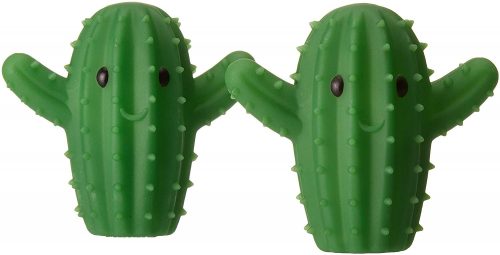 AirPods have quickly become the preferred Bluetooth headphones of Apple users everywhere, but that tiny case can be a little difficult to keep track of among the hustle and bustle of daily life. That is why having a carrying case of some sort is pretty helpful to keep track of where they are at any given time. This particular version from V-MORO is made from a stylish, quality leather that adds a bit of refined look and feel. Additionally, the front LED is visible through the case, so users will be able to tell at a glance where their battery life is—all without needing to remove the case. 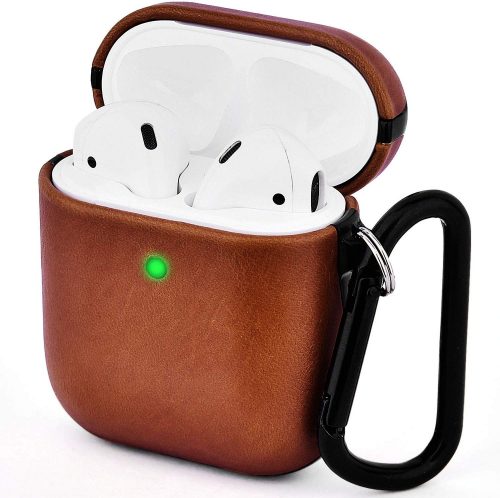 The holidays are a perfect time to go ahead and invest in a really good beanie or winter cap. Fortunately, Carhartt’s Watch Cap is one of the best around, at a price that won’t break the bank. The uni-sex cap comes in just about every color under the sun, so there’s more than likely something for everyone’s stocking. 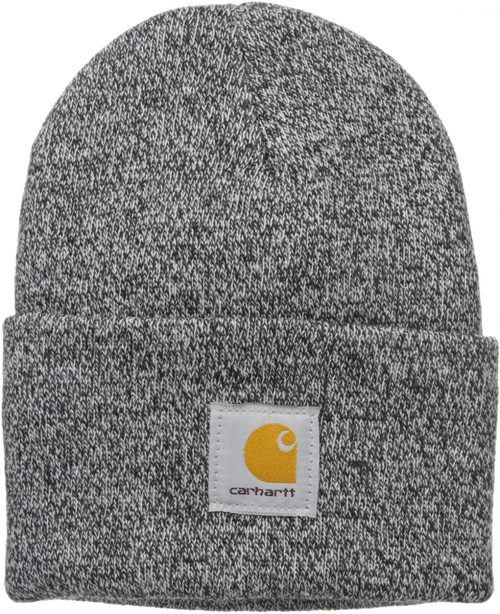