Have you ever played Uno? Or Hearts? Well, this card game is sort of like those. Except there are exploding kittens, magical unicorns, all-seeing goats and enchiladas. It’s a card game for the next generation and the #1 most-funded project on Kickstarter of all time.

Exploding Kittens is a card game for the nerd in you looking to giggle at ridiculousness during this current juncture. 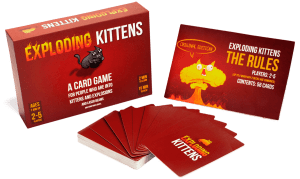 It comes from the creators of The Oatmeal, the comical site with distinctive cartoons you’ll recognize anywhere. The deck is packed to the brim with characters you’ll love and game play that’s easy to follow, takes some luck and some skill and can be played quickly with 2-10 players, depending on which pack you get.

They’ve got a few different editions for you to try. The Original Edition is family-friendly and has enough cards for 2-5 players, or up to 9 players if you’re using two decks. This one includes cards like the “Tacocat” the “Nope Ninja” and the skip card that allows you to “Commandeer a Bunnyraptor.”

They’ve also got a NSFW Edition that’s described as a “card game for people who are into kittens and explosions and boob wizards and sometimes butts.” Better to save this one for the adult-only dinner parties you’ll be going to.

Then there’s the Party Pack Edition that can accommodate between 2-10 players easily and is also family-friendly. It’s got cards similar to the first one.

No matter what you choose, this game is sure to be a hoot and a holler at your next game night, virtual or otherwise.