The Marvel Cinematic Universe is sure to be at the top of the holiday lists of kids and adults alike, and now you can count down the days with the Funko POP! Advent Calendar: Marvel 80th Anniversary edition. Two dozen awesome Funko POP! figurines of all your favorite Marvel characters, lined up in a colorful advent calendar decorated with the awesome comic art that has made Marvel great for 80 years!

The countdown to Christmas has never been more fun or colorful. Two of the hottest pop culture phenomena — Funko POP! figures and the Marvel Cinematic Universe — come together to make every December morning leading up to the big day a fun and exciting reveal!

2019 was probably the greatest year in the eight-decade history of Marvel. Box-office smashes Spider-Man: Far From Home, Captain Marvel, and Avengers: Endgame — the highest-grossing film of all time — reinforced Marvel as the entertainment giant in the world of superheroes and sci-fi.

Funko’s collectibles have been must-haves for years now, and their Marvel Universe figures are among their top sellers year after year. This calendar went up for pre-order in July, and is available now! But don’t wait — the Funko Marvel 80th Anniversary Advent Calendar is among the top-selling advent calendars on all of Amazon. You’ll want to order this now so you don’t miss out on that first-day reveal on December 1. 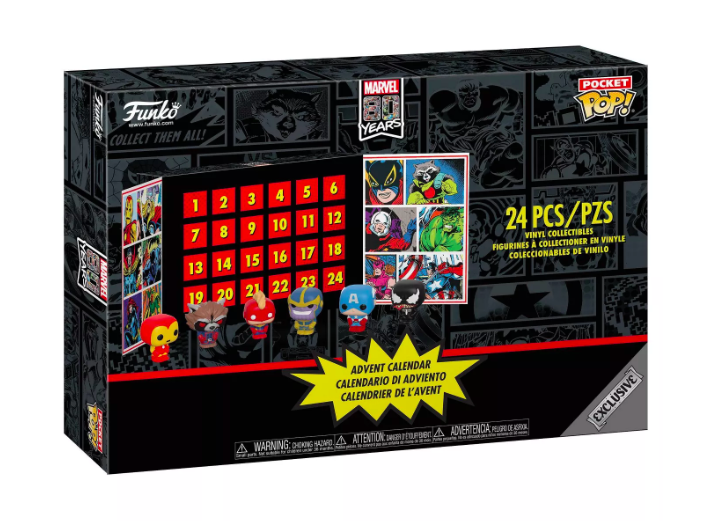 Without giving out any spoilers — and really, is anything worse than spoilers when we’re talking about the MCU? — the calendar’s doors conceal two dozen of the superheroes (and villains) that have made the leap from the pages of Marvel’s comic books to the big screen, becoming cultural icons along the way. The figures are between one and two inches tall, but have the same incredible detail you’ve become used to from Funko’s figures both large and small. Every day is a surprise, and a new fun collectible to be displayed year round!

The sturdy cardboard construction of the calendar box means that, with appropriate care, the figures can be returned to the calendar again and again for many Decembers to come.

Word of warning — although the wee ones also love them some Marvel superhero action figures, these are very small figures, and pose a choking hazard for children under 3 years old.

Spider-Man? Hulk? Iron Man? The Mad Titan Thanos? There’s one awesome Funko Pocket POP! behind every door of this great new Funko POP! Marvel collaboration. But the holidays are sneaking up on us faster than ever — be sure to get your Marvel 80th Anniversary Funko POP! Advent Calendar today before December hits.