After Kobe Bryant’s tragic passing in late January in a helicopter crash along with seven other people, including his daughter Gianna, the world scrambled to find ways to honor the Black Mamba.

His accomplishments in the basketball world and beyond leave behind a legacy that will not soon be forgotten by anyone who knew him, watched him play or supported the Lakers.

Bryant played for the Lakers for 20 straight seasons, leading the team to five championships during that time and scoring 33,643 career points. He was an 18-time NBA All-Star and retired after the 2015-2016 season.

He went on to coach his daughter’s basketball team, write a book and executive produce an Oscar-award winning short film “Dear Basketball.”

He was a man of many talents, and for that he deserves special recognition.

In his memory, Nike is releasing a brand new spin on the Kobe 5 sneaker on March 26 to honor the late athlete. The new Kobe 5 sneakers will feature a colorway in the Laker’s signature colors — purple and gold.

The shoe originally debuted in 2010 with the signature Swoosh added later that year as part of Nike’s Protro program. The original Nike Zoom Kobe 5 Protro “Lakers” shoes are pictured below. On the resale website StockX, the originals are currently valued at $400. The new ones are rumored to look similar to these with slight upgrades. 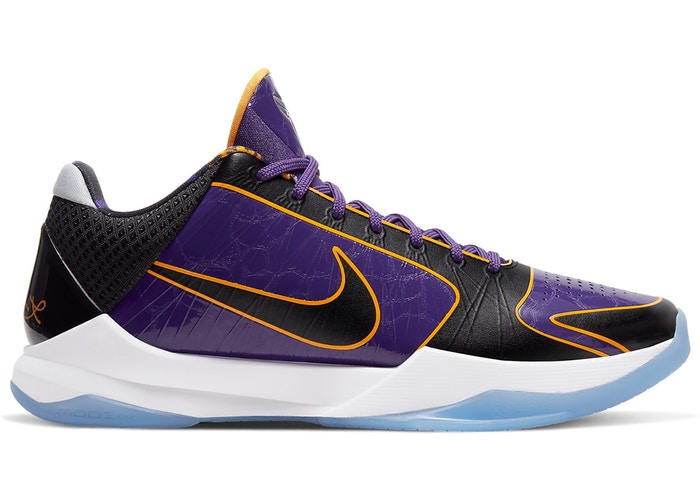 The sneaker will feature a purple upper with black and gold accents to commemorate Kobe and everything he contributed to the athletic world at large.

Anthony Davis of the Lakers was seen wearing the original sneakers during February’s NBA All-Star Game in Chicago and the Spurs’ DeMar Rozan also rocked them in a game as well to honor Kobe.

The original Nike Zoom Kobe 5 was the shoe Bryant wore in 2010 when the Lakers captured their fifth championship title by beating a long-time rival, the Boston Celtics.

When the updated Kobe 5 sneakers are released March 26 to honor the athlete’s legacy, they are expected to sell out very quickly. We will update this post as more information becomes available.