One of the strange side effects of the ongoing pandemic is an economic trend known as The Great Resignation, in which an unprecedented number of workers quit their jobs. This term was first coined by Anthony Klotz, a professor of management at Mays Business School at Texas A&M University in May 2021. A full year later, it’s clear that The Great Resignation isn’t stopping, as millions of workers across white-collar and blue-collar industries leave their jobs for posts with higher pay or better working conditions. In many ways, this has had a positive impact from a labor standpoint, (slightly) re-tilting the balance of employer/employee in the latter’s favor.

According to ZipRecruiter, companies are trying hard to attract talent, offering perks like signing bonuses and greater flexibility. As a result, The Great Resignation has led to higher wages for employees across the board, even those who haven’t considered leaving their posts. Right now, ZipRecruiter is a great resource for anyone looking to make a move on a new job opportunity, especially since they make it easy to apply to a job with one click.

But of course, before you can join the millions who’ve taken part in The Great Resignation, you need to first quit your job. If you’re wondering how to quit a job, there are a few steps you should take to avoid burning bridges. This is especially true if you’re planning a move to a company in the same field or industry, as some of the people you’ll be working with are likely to know some of the people you used to work with. Quitting your job can be a nerve-racking proposition, but it’s important to remember that you’re well within your rights to quit your job and find something that better suits you.

Ready to get started? Here’s our guide on learning how to quit a job.

It’s important to first be sure that you want to quit your current job and to be prepared for the changes that quitting entails. If, for example, the company’s culture fundamentally doesn’t line up with your values, then quitting is likely your best option. But you might discover that you don’t need to quit if, instead, you have problems with pay, hours, workload or other possibly flexible issues. If you like your company and job, then you might instead want to have a conversation with your boss regarding areas that aren’t keeping you satisfied.

If you ultimately decide to quit, it’s important to ensure you have enough money saved up to ease your transition, especially if you’re not going straight to another position. Take stock of any nonnegotiable expenses you have, such as food and rent.

Check Out Resources for Job Seekers on ZipRecruiter

There are a lot of ways to quit a job. In 2010, JetBlue flight attendant Steven Slater became a media sensation when, after being insulted by a passenger, he deployed the airplane’s emergency slide, took beer from the galley, and exited onto the tarmac. Or, simply put, he grabbed two beers and jumped. Unsurprisingly, this created some legal troubles for him, so while his dramatic resignation was admirable in its boldness, it’s probably not a path you want to emulate if you’re trying to figure out how to quit your job.

Instead, it’s best to plan how you want to quit your job and give ample notice. Two weeks remains the standard; giving notice to your manager will give them time to fill the position. If you’re going to be continuing to work in the same industry, you’ll want to avoid burning bridges with your old employer, who’ll likely have relationships with others in the industry. 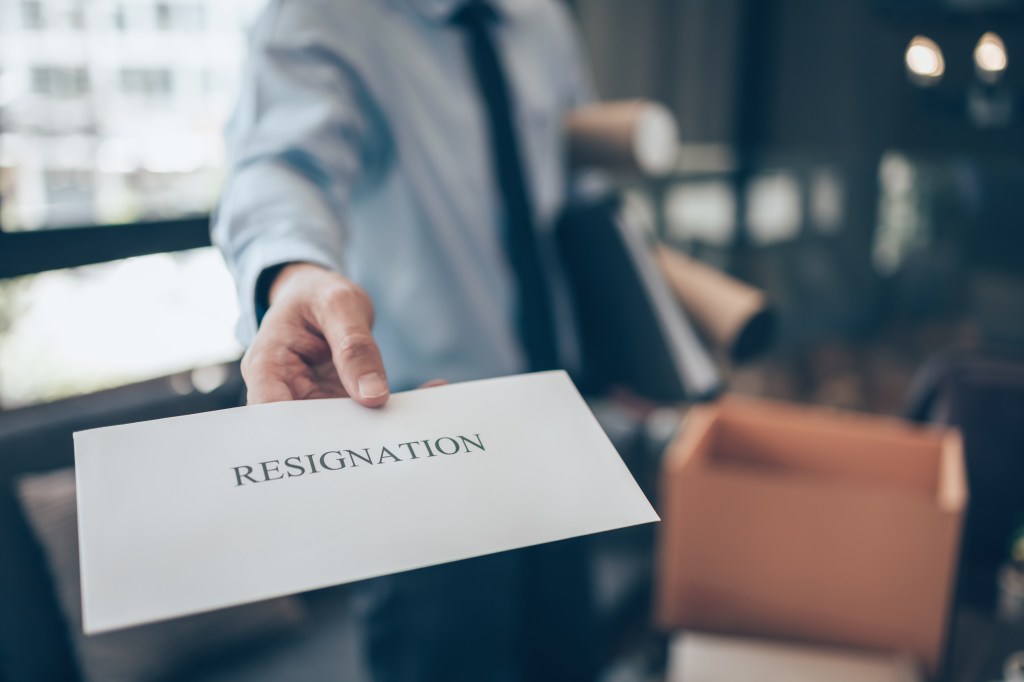 For advice, I talked to Tim Werth, Site Director of SPY.com (and my boss) who received many employees’ two-week notices throughout his career. He noted that while it can be nerve-wracking to quit a job, it’s usually not as scary as it seems. “Usually, employees are really nervous to put in their two weeks’ notice, and they’re often surprised by how simple and matter of fact the conversation is.” He points out that if you have a good relationship with your manager, they should be happy for any new opportunities you might pursue.

It’s important to announce your intention to quit in the most personal way possible. For most people, that’ll mean an in-person conversation. If that’s not possible because you work remotely, a video meeting will be the next best thing. After that, depending on the position, you might be expected to write a letter of resignation.

Additionally, you’re not required to provide a reason for why you’re quitting. You can cite factors like “a new opportunity,” “family reasons” or other general explanations, without needing to go in-depth as to why you’re leaving.

Your next steps for quitting your job can depend largely on whether or not you have another position lined up. Having a new job ready to go is ideal, but it’s not always possible. If you’ll be going from employed to unemployed, it’s good to have a plan to cushion that transition. As the New York Times points out, you might have unused paid time off, it’s possible that this could be paid out to you after you leave. Likewise, you should take stock of any health benefits you might have. If those expire on your last working day, you might opt to schedule doctor’s appointments before you leave. Finally, make sure you collect any devices (laptops, chargers, phones, etc), documents, keycards and any other company property that you need to return.

Though quitting can be a big leap, finding an opportunity that works best for you is ultimately the key to unlocking sustained career happiness. Now that you know how to quit your job, you can start your job-search adventure by joining the 25 million monthly active users on ZipRecruiter.

Find Your Next Great Opportunity on ZipRecruiter