We may receive payment from affiliate links included within this content. Our affiliate partners do not influence our editorial opinions or analysis. To learn more, see our Advertiser Disclosure.

Mike is a police detective in Delaware who works in rough neighborhoods, so he knows about criminals. But he also knows about victims. He rescued a pit bull from death at an animal shelter where the director was later charged with animal cruelty. Among the allegations: The director killed pit bulls just for “revenge” after a volunteer requested public records on euthanasia at the shelter.

Criminals or victims? No other dog breed creates more controversy than the pit bull. There are no neutral corners. A jogger says he’s fearful every time he runs by a pit bull chained to a stake in its back yard. But Mike, who works as an undercover police officer and asked that his last name not be used, calls this breed “the biggest softies you’ll ever meet.”

That’s not how homeowners insurance companies look at pit bulls. Many have compiled “banned breed” lists of dogs that customers shouldn’t have. Homeowners and renters alike can lose their insurance if it turns out they have one living in their home. Pit bulls top this rogues’ gallery, along with Dobermans and Rottweilers.

There’s no list of home insurance companies that will definitely take pit bulls. If a company doesn’t have an official “banned” list, it typically takes aggressive breeds on a case-by-case basis. For example, State Farm has no list of banned dog breeds. But there’s no list of surefire companies for pit bull owners or other problematic breeds — especially if the dog has a history of biting.

And there’s a litany of municipal laws against pit bulls, too.

The result: Cute and cuddly pit bull puppies sold on the internet are cast aside when they’re full-grown. Even if they’re still affectionate and friendly, many, if not most, who don’t already have homes are deemed unadoptable — and an estimated 1,200 are euthanized each day, according to the American Pit Bull Foundation.

New Jersey resident Joe Mihalyi visited pet adoption fairs and came away amazed by what he saw. “Nine out of the 10 dogs in the cages were pit bulls,” he recalls. “They had scarred faces and marks all over them. You could sense that they just wanted to be loved, and we wanted to adopt one. But since we’d never know what they’d been through, we just couldn’t take the chance.”

Dogs have often served man’s darker impulses — even in literature. When Shakespeare’s Macbeth says, “They have tied me to a stake,” he’s referring to “bear baiting,” a medieval entertainment where a bear is tied up and killed by dogs who hang on his face and throat until he bleeds to death. And who can forget that Charles Dickens’ worst villain, Bill Sikes, is shadowed by his dog “Bull’s-eye” when he pursues young Oliver Twist?

Science followed suit and helped cement the reputation of pit bulls as an aggressive breed. In 1979 the Centers for Disease Control (CDC) began a study that precipitated many of the local laws against pit bulls, even though it wasn’t clear, in many instances, what breed of dog had committed the alleged crime in the government data.

There’s an even darker connotation that says more about man than dog. Prejudice against pit bulls could be based on discrimination against people of color, according to “The Black Man’s Dog,” a 2018 study.

It’s hard for people to be unafraid of a big dog with a bad reputation — often not deserved — for aggression. But some statistics could help.

The CDC study on dog breeds has been discredited, but insurers have their own data on dog bites. Insurance companies receive some 4 million reports a year, but that, of course, represents bites from all breeds. Veterinarians say any dog can, and will, bite, either to protect itself or its owner. Animal shelter workers say they are more likely to be bitten by a Chihuahua than a pit bull.

The common myth that a pit bull’s bite equates to the strength of an alligator is wrong. But the breed does bite harder than many other dogs, and a Houston-area study of dog bites found that pit bulls had the greatest frequency of bites causing severe injuries, totaling 25% of reported bites. The supposedly family-friendly Labrador retriever came in second at 14%.

But it’s really lawyers and doctors who put the bite on insurers. The actual number of dog bites declined in 2020, perhaps because more people were home taking care of them, but the medical and legal costs rose about 12%.

Staying Out of Trouble

Animal advocates say that pit bulls — and other dogs — have similar needs as people.

“First, make sure that your pet is healthy,” says Heather Paul of State Farm Insurance, which has no list of banned dog breeds. “Not all illnesses or injuries are obvious, and dogs are more likely to bite if they’re sick or in pain.” She herself has two pit bulls.

One way to keep pets healthy without breaking the bank is pet insurance. These plans reimburse you for vet bills for pet accidents and injuries, and many also offer coverage for routine wellness care. Pet wellness plans typically cover an annual pet wellness exam, flea and tick prevention, heartworm prevention, microchipping and more.

The cost of pet insurance is largely based on your location, coverage choices and the pet’s age and breed. Pit bulls tend to be among the most expensive dog breeds for pet insurance, along with other dogs of bigger size and weight such as Dobermans, Mastiffs and Saint Bernards. 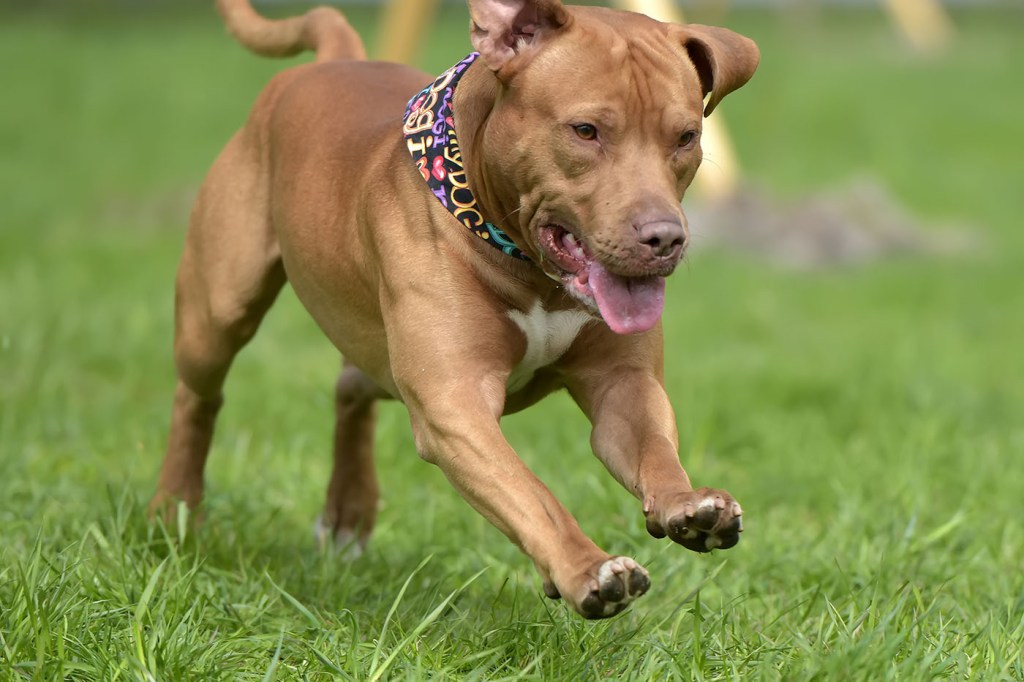 If your homeowner’s insurance company objects to your dog, look for another insurer. If the dog already has a history of biting, you’ll be in a tough spot. A possible solution is to exclude the dog from your home insurance policy, which will leave you holding the bill for any dog-related lawsuits against you.

“Dogs used for fighting needed to be routinely handled by people,” notes the ASPCA. Those people wouldn’t tolerate the dogs biting them. Research on dogs as pets confirms that “aggressive dogs are no more likely to direct aggression toward people” than other dogs, says the animal rights group.

Nonetheless, more than 700 cities have “breed specific legislation” that seeks to ban or regulate certain dog breeds, according to the ASPCA. Under former President Obama, the White House referred to such legislation as ineffective and “a waste of public resources.”

The pit bull now has its own TV show, “Pit Bulls & Parolees,” where convicts and dogs find redemption by bonding with each other.

Mike’s pit bull is 14 years old. She has lived 13 years longer than she would have if she remained in that kill shelter. “She’s an old girl now with arthritic hips and knees. She’s blind and can’t hear,” says Mike.

But she is still loved.