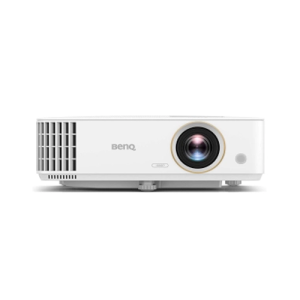 The BenQ TH685 has great image quality and contrast regardless of whether it is in a lit or dark room. And you have some flexibility with image correction thanks to a lens that can zoom 1.3x and adjust vertically to help eliminate image keystoning. The zoom also provides some wiggle room on how close you can put the projector to a wall. For the money, this projector provides outstanding image quality.

It has an adjustable lens that zooms and adjusts vertically, providing flexibility on where you can place it and picture quality. 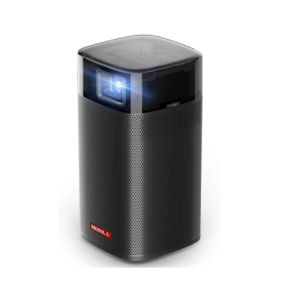 A projector that was built for the future. With apps like Netflix and YouTube on board as well as the ability to control it with your phone thanks to the Android 7.1 platform, you essentially don’t need anything else other than your phone, this projector and a blank wall. It performs best in low-lit or completely dark rooms and can cast a screen up to 100 inches long. That’s impressive considering this mini projector can fit right into your laptop bag. 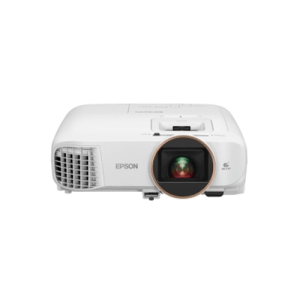 This is a good choice for those who like to watch shows and movies with a little more light in the room. It can zoom 1.6x and has a vertical tilt to help correct image errors like keystoning. The projector has Android TV integration by connecting a dongle through the HDMI on the back of the projector. This integration turns this projector into a media streamer and even has voice control through the remote.

It has a media streamer and voice control.

It performs better in lit rooms than it does in dark. 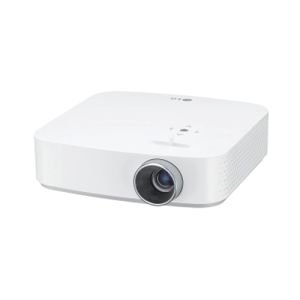 There are plenty of connection options making this projector a viable option for a number of different viewing scenarios. It has two HDMI ports and an antenna-in for those who still have cable. But the bread and butter comes from being able to screen share with your phone and connect to additional speakers via Bluetooth. You can also plug a USB into the back and share the contents of the USB making it a great option for the home or office.

You can cast from your phone to the projector and connect it to Bluetooth speakers.

It doesn’t get as bright as other projectors and others have better picture quality. 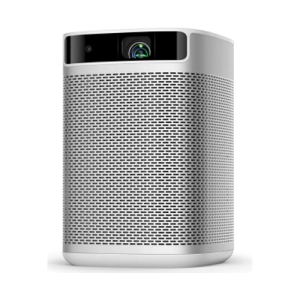 For being a small projector, it’s actually a media streaming giant. It has Android TV as the smart platform, but also built-in Chromecast and Google Assistant for voice control. But don’t worry, there are still HDMI and USB ports on board for those who prefer wired connections. Even though it has Harmon Kardon speakers on board, which don’t sound bad, it has the ability to connect to additional speakers via Bluetooth to level up the sound quality to match the 1080p picture quality.

It has a number of streaming options including Chromecast and Google Assistant.

No Netflix app, but you can cast it through your phone.

When you buy something through our retail links, we may earn commission and the retailer may receive certain auditable data for accounting purposes.
September 10, 2021
By Jonathan Knoder

One of the things we missed over the last year and a half is going to the movies. There is nothing like watching a movie on the big screen. But going to the movies has its share of pain points — expensive ticket prices, people talking and of course, the potential for COVID. With a cheap projector, you can bring the movie-going experience to your home without having to take out a second mortgage and leave behind all the other stuff that sucks about going to the movies.

Before you buy a cheap home projector, here are some things you should consider:

You should also consider having enough wall space for a projector. The best case scenario is having a projector screen, but if you don’t, a big blank white wall will do the trick. Also if your projector doesn’t have any onboard streaming or WiFi, you’ll need an additional streaming device or gaming console to run your media.

Wave goodbye to movie theaters and annoying movie talkers for good with the best cheap projectors for sale.

For a projector under $1,000, the BenQ TH685 provides some of the best image quality and is one of the easiest to dial in the picture thanks to a flexible lens that can zoom but also be adjusted vertically. This is important because it can help eliminate what’s called the “keystone effect,” which is when an image distorts and looks like the words that scroll upward in the intro of Star Wars movies. It also has a 1.3x zoom which gives you a little bit of flexibility on how close you can place the projector to the screen. Its ability to create a great contrast in both well-lit and dark rooms sets this cheap projector apart from others in its price range.

Pros: It has an adjustable lens that zooms and adjusts vertically providing flexibility on where you can place it and picture quality. 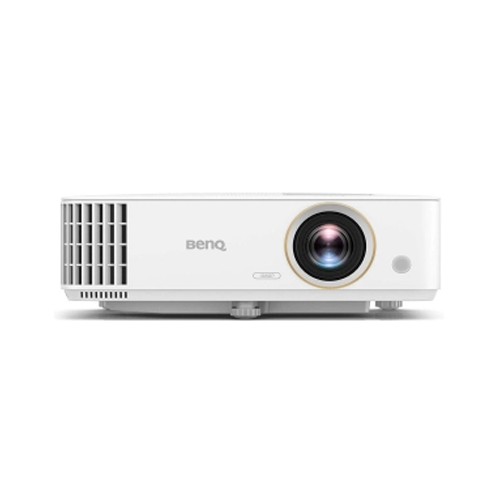 This is a projector fit for modern-day streaming. Essentially a portable streaming box disguised as a projector, the Anker Nebula Apollo has apps like Netflix and YouTube on board so you can set up the projector and immediately start streaming your favorite content without the need for any other media box. It also uses Android 7.1 as the platform so instead of having a bulky controller, you can either use the onboard controls or simply use your phone as the remote control. Although it is a portable projector, it is best used in dimmer rooms. 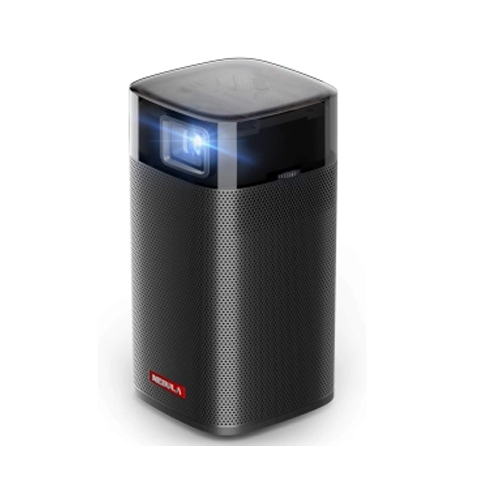 This budget projector gets brighter than the BenQ option providing those who enjoy watching movies with a little light in the room a solid option. That being said, when in complete darkness, the Epson Home Cinema’s contrast isn’t as great as the BenQ, although it still holds its own. It has a little bit better zoom at 1.6x and the lens can also vertically adjust providing a way to easily correct image issues if they occur. It also has a built-in media player — Android TV to be specific — that connects to the projector through a dongle. This provides streaming capabilities as well as a remote with voice activation.

Pros: It has a media streamer and voice control.

Cons: It performs better in lit rooms than it does in dark. 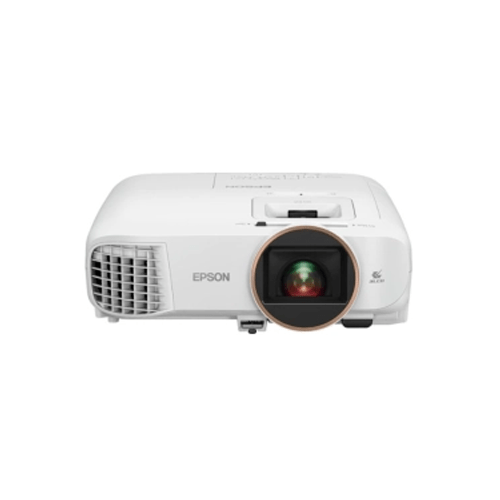 The LG CineBeam Projector might not have onboard streaming apps like YouTube or Netflix, but it does have plenty of connection options including two HDMI ports, a headphone jack and an antenna-in so you can watch TV. It also features a wireless screen share option allowing you to mirror your phone. With Bluetooth connectivity, you can connect the projector to a Bluetooth speaker to liven up the audio quality as most projectors either don’t have speakers or poor ones built-in. Beyond entertainment, it’s also a solid option for the office since you can plug a USB right into the backport and share the contents straight from the USB. Plus, it can even run on battery life for 2.5 hours.

Pros: You can cast from your phone to the projector and connect it to Bluetooth speakers.

Cons: It doesn’t get as bright as other projectors and others have better picture quality. 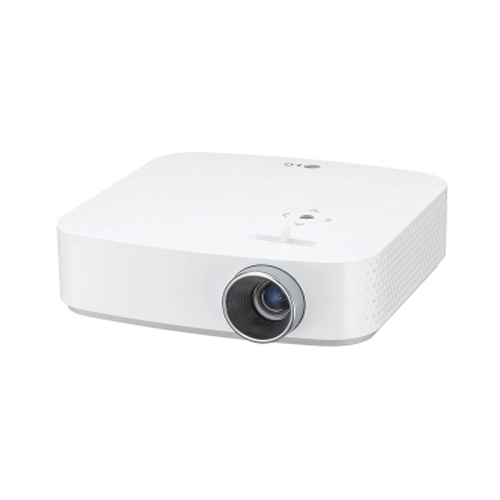 This portable projector has about as many media streaming options and casting options as a smart TV. Really though, it uses the Android TV platform but also has Chomecast and Google Assistant built-in providing you with a wide variety of options for entertainment and control. If wireless streaming isn’t really your thing, there are HDMI and USB inputs for additional types of connectivity. And like the LG CineBeam, you can also connect a Bluetooth speaker to it for upgraded sound quality. Beyond connectivity, the 1080p image quality is impressive. Who said big things don’t come in small packages?

Pros: It has a number of streaming options including Chromecast and Google Assistant.

Cons: No Netflix app, but you can cast it through your phone. 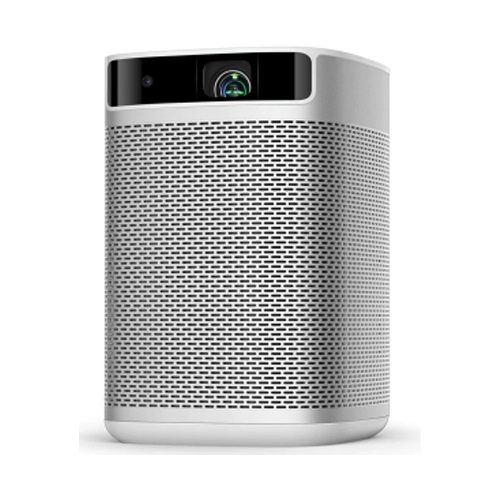 SPY.com is a discovery and reviews platform, connecting you with the latest tech, style, smart gadgets, and health and grooming staples you can’t find elsewhere.