The summer of 2021 is, once again, the summer of tie-dye. And while style might not seem like the most important concern in the world right now, you have to wear something. And right now tie-dye shirts, hoodies, bandanas and shoes are absolutely everywhere you look.

Did this tie-dye trend seem to come out of nowhere? Think again. Menswear designers like Off-White, Jacquemus and Misbhv have been showing the best men’s tie-dye clothing since last season. And if you’re an old-school jam band enthusiast, then tie-dye’s practically part of your DNA. Popular since the mid-60s, the mélange of swirling colors is a symbol of happy hedonism.

Since we’re living through the summer of tie-dye everything, we wanted to break down this fashion trend. In this post, we’ll explore the origins of this colorful style. We’ll also share some of our favorite tie-dye shirts, tie-dye hoodies and tie-dye accessories for sale right now, from classic t-shirts to limited-edition tie-dye watches and stylish cloth face masks.

Keep reading to find all of the best men’s tie-dye clothing for sale this summer. 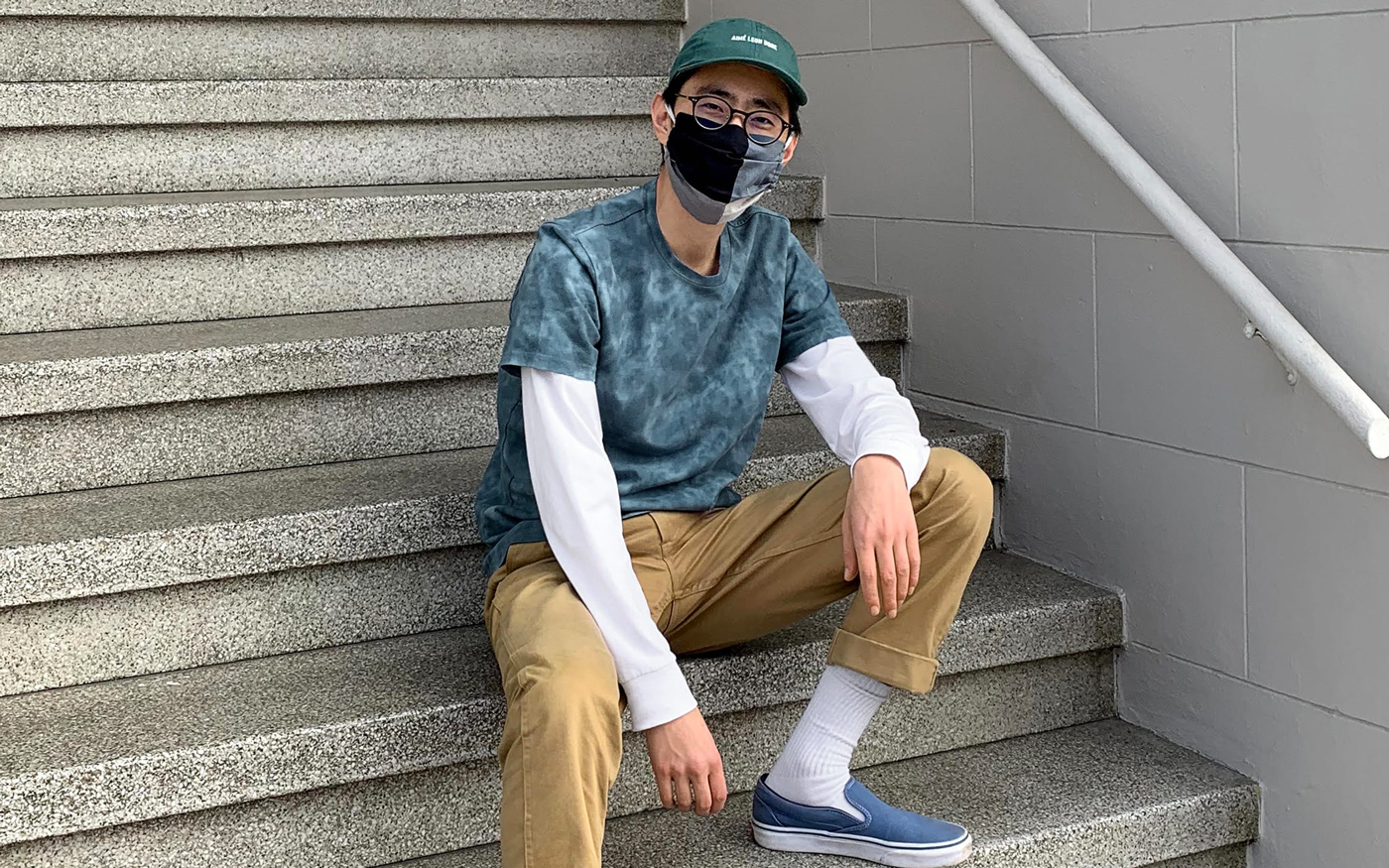 Where Did Tie-Dye Come From? The History of Tie-Dye

How did the abstract dye become summer’s perennial go to print? Tie-dye’s modern popularity has murky origins, but it first started to appear in 1964. Some claim (or blame) Ken Kesey and his psychedelic-soaked Merry Pranksters, who experimented with model airplane paint and fabric as seen in found footage that floated around during that era, and was later incorporated into 2011 documentary, Magic Trip.

The trend has also been hailed as saving clothing dye brand Rit Dye from extinction. In 1965, an exec from Best Foods, the parent company of Rit Dye, flew to New York City looking for artists who’d be open to experimenting with tie-dye using Rit. Exec Don Price scoured Greenwich Village and found two out-of-work window decorators, Will and Eileen Richardson, who gave it a shot. Using velvet and chiffon, Price was thrilled with the results and showed them to a bunch of designers. Famed designer Roy Halston placed a $5,000 fabric order and dressed Ali McGraw and other celebs in chic tie-dye wear. A few years later, menswear designer Gordon Deighton was selling upscale tie-dye menswear in London’s Simpsons of Picadilly department store.

By the time Woodstock rolled around (1969) Janis Joplin and Joe Cocker (who reportedly made his own tie-dye apparel) wore tie-dye on stage. Every decade since then, tie-dye in some way or form comes back into fashion. Weirdly enough, tie-dye socks were a very big thing in the 80s.

Tie-dye isn’t a modern invention. The oldest piece of tie-dyed fabric is pre-Columbian and dates back to 500-800 AD. The traditional colorways of red, blue, yellow and green wouldn’t look out of place today. Ancient tie-dye styles can also be traced back to Japan, as their Shibori dying techniques (pleating, folding and then dipping into dye) are sometimes named as the forerunners of modern tie-dye. Menswear company John Elliott has been incorporating traditional Japenese Shibori dying techniques into his clothing, as seen here: 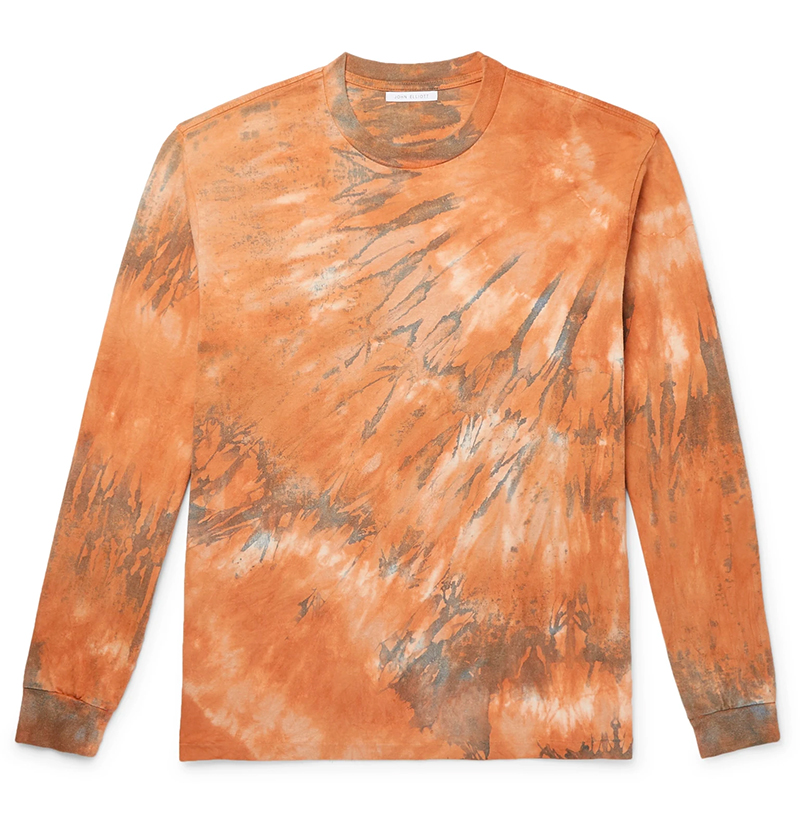 Yes, you can create your own tie-dye creations at home. All you need are rubber bands, clothing and, of course, clothing dye. You can buy Rit Dye online and either soak your clothing in a basin or use a washing machine. YouTube’s littered with tons of tie-dye instructional videos to help you along. You can also pick up a tie-dye kit. The kits come with lots of colors and tips.

How Do You Style Men’s Tie-Dye Clothing & Accessories?

First, remember that not all tie-dye is created equally. The bold psychedelic colors of your typical Grateful Dead t-shirts aren’t actually in style right now. Instead of the rainbow vomit colorways you’re used to, modern tie-dye has a distinctly modern look. In terms of color, designers are currently experimenting with both darker tie-dye and pastel tie-dye. You’ll also find lots of barely-there tie-dye prints that use plenty of white space in their designs. Finally, lots of popular tye-dye clothing is designed to resemble marble or a cloudy sky, and blue is definitely the most common color used for modern tie-dye clothing and accessories. Some of our favorite men’s t-shirts feature a light blue print that resembles the sky.

John Elliott has embraced all of these trends, as seen in these selections from the brand’s Double Dye collection. The brand’s men’s tie-dye hoodies are a work of art.

When it comes to tie-dye style, you only want to incorporate one piece of clothing into an outfit. Consider that a hard limit. You may have a closet full of tie-dye sweats, pants and hoodies, but one piece of tie-dye is enough for any outfit. The only exception would be accessories. If you wear tie-dye socks, a hat or watch, then you can combine them with another tie-dye item. Likewise, if you’re wearing tie-dye footwear, it’s okay to wear a tie-dye top, but not a bottom.

If you like the tie-dye clothing trend but are worried about feeling overwhelmed, try tie-dye socks, boxer briefs or any tie-dye accessory.

Fortunately, there’s no shortage of options, as virtually every menswear company has at least one tie-dye product for sale right now. Scroll on for the best tie-dye clothing and tie-dye accessories for men to wear this summer.